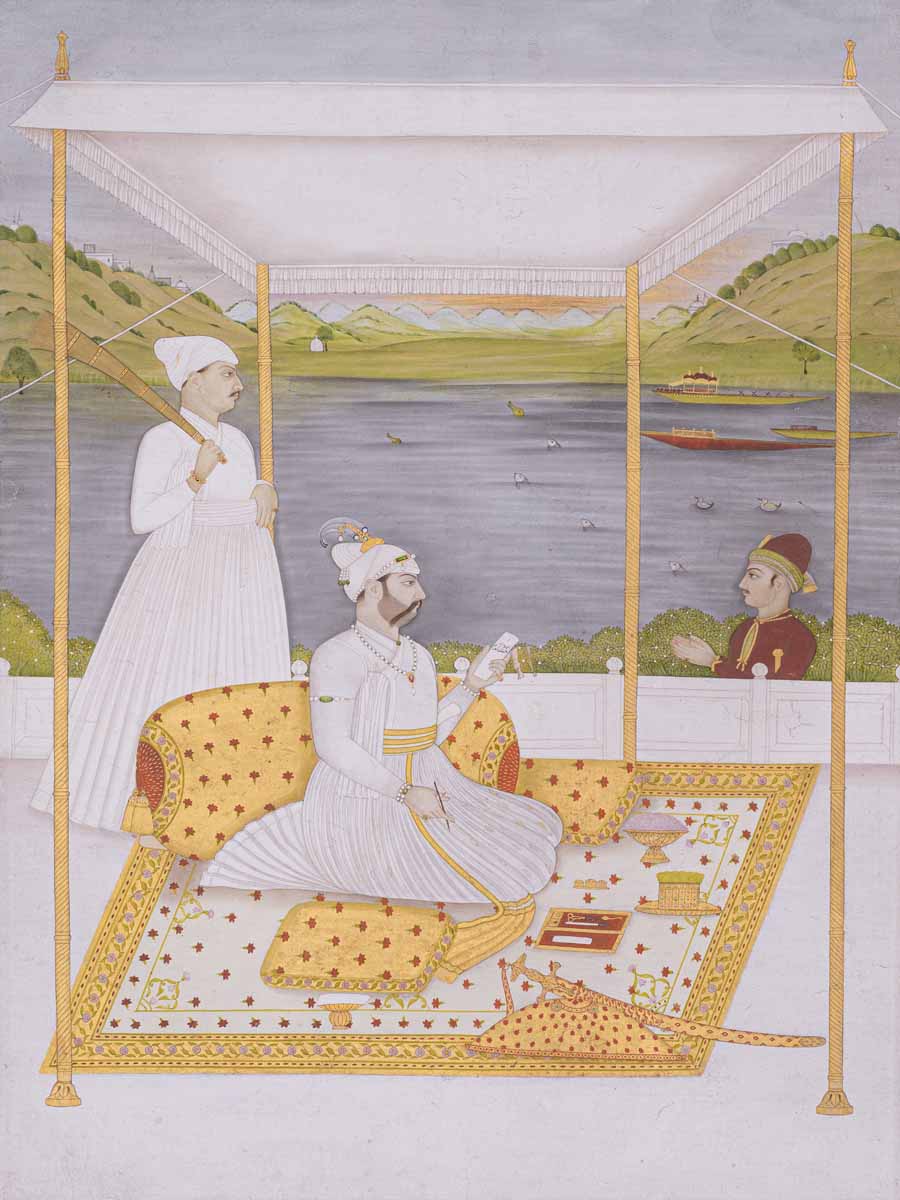 1. “(Re)membering through Repetition: Seriality and Memorial Art” at the Philadelphia Show

Jessica Todd Smith, curator of American art at the Philadelphia Museum of Art, and Gwendolyn DuBois Shaw, associate professor at the University of Pennsylvania, will discuss the museum’s new show, “Elegy: Lament in the 20th Century.” The exhibition explores how artists living and/or working in the U.S. during the 20th century have responded to tragedy, grappled with mortality, and honored those who have passed. The virtual presentation will focus on series and repetition in the Malcolm X sculptures by Barbara Chase-Riboud and the “Elegy to the Spanish Republic” paintings by Robert Motherwell.

2. “Artist Talk: Terry Allen” at the Blanton Museum of Art, University of Texas at Austin

On the occasion of his current exhibition “MemWars” (through July 10), Texas musician, songwriter, and visual artist Terry Allen talks with Blanton deputy director Carter E. Foster about his creative process and how he integrates music, performance, theater, and drawing into his work. It’s part of the museum’s ongoing virtual “Curated Conversations” series.

Timed to 14 in-person auctions and six online sales at Bonhams, Christie’s, Doyle, Heritage Auctions, iGavel, and Sotheby’s, Asia Week New York returns to its in-person format this year with 22 international dealers setting up shop at host galleries, mostly on the Upper East Side. With work from across the Asian continent ranging from 2,000 BCE to the present day, expect museum-quality art in a wide range of mediums, including textiles, ceramics, and basketry, as well as prints and paintings. San Francisco’s Art Passages is bringing a major painting by Gobind Singh, a court artist to the Mughal Emperor Shah ‘Alam, from the year 1760. DAG, a New York gallery specializing in India’s modern masters, is showcasing 10 of the nation’s trailblazing women artists from the 20th century, including Ambika Dhurandhar, the first Indian women to receive a formal art degree, and Mrinalini Mukherjee, who had a stunning solo show at the Met Breuer in 2019 and is among the artists featured in the upcoming Venice Biennale. Fu Qiumeng Fine Art, a New York gallery that is participating for the first time, is offering collaborative works that meld the techniques of classical ink painting with photography by Chinese American artist Arnold Chang, who lives in New Jersey, and American photographer Michael Cherney, who lives in Beijing.

Installation view of “Consequences: A Parlor Game,” at the National Arts Club, New York. Photo by Arturo Sánchez, courtesy of the National Academy of Design.

Peter Halley, Trenton Doyle Hancock, Rashid Johnson, and Julie Mehretu are among the artists featured in this group show organized by the National Academy of Design. Curated by Sara Reisman and Natalia Viera Salgado, the exhibition is a celebration of abstraction in all forms—hard edge, gestural, conceptual—recognizing both its importance in art history and the way it frees artists from the limits of representation, particularly in times of political crisis. Because each artist selected their contributions on their own, the show takes its title from a Surrealist game in the style of mad libs or exquisite corpse, in which participants collectively write a story or complete a drawing without knowing what the others have added.

Buddha attended by two bodhisattvas, Gandhara, Peshawar region, Pakistan, inscribed and dated ‘Year 5,’ possibly equivalent to AD 235 in the reign of Kanishka II. Schist. On loan from a private collection. The work sold for $6,630,000 at Christie’s New York in October 2020. Photo courtesy of the Metropolitan Museum of Art, New York.

5. “Annual Distinguished Lecture on the Arts of South and Southeast Asia—Buddhist Art of Gandhara and the ‘Year 5’ Buddha: Exploring Its Place in Time, Space, and Practice” at the Metropolitan Museum of Art, New York

For this annual lecture at the Met, Juhyung Rhi, a professor of archaeology and art history at Seoul National University, will talk about the significance of a rare schist relief sculpture of the Buddha that sold for $6.6 million at Christie’s New York in October 2020. Known as ‘Year 5’ Buddha, it is one of only five known extant dated Gandharan sculptures.

Hua Khar, Course of the Lifespan Principle (1995–1996). Collection of the Rubin Museum of Art, gift of Shelley and Donald Rubin Private Collection.

Timed to Asia Week, the Rubin Museum’s new show is an exploration of Tibetan Buddhist artworks related to healing and mental, physical, and spiritual practices for well-being. Tickets for Friday’s opening night party (6 p.m.–10 p.m.) with a performance by Yesh and Nathan Harrington are sold out, with limited walk-in tickets available.

7. “Moonfolk: Passages Toward Greater Understanding” from the Children’s Museum of the Arts, New York

The Children’s Museum of the Arts has partnered with ArtBridge, which organizes public art shows on construction fencing and scaffolding, on a new mural by Tomashi Jackson on the theme of world peace. An accompanying exhibition features artworks made in response to Jackson’s work by New York City children ages four to 12. The show is part of the NYC Department of Cultural Affairs’s “City Canvas” program, which installs art on temporary protective barriers at construction sites. In celebration of the opening, the museum is holding a tour of the exhibition followed by a sparkling cider toast and mural-making party.

8. “Shikō Munakata: A Way of Seeing” at the Japan Society, New York

It’s your last chance to see this exhibition of nearly 100 works by Shikō Munakata, a Japanese artist who lived from 1903 to 1975 and was known for his woodblock prints. The Japan Society has the nation’s largest collection of his work, including some pieces made there during Munakata’s first visit to the U.S. in 1959, as a fellow of the institution’s Print Artists Program. Highlights include his “Tōkaidō” Series (1964), depicting scenes along the route between Tokyo and Kyoto, shown in its entirety for the first time since 1965, as well as examples of his calligraphy, sumi ink paintings, watercolors, lithography, and ceramics.

9. “Patriarchy RIP” at SaveArtSpace, in nine cities across the U.S.

Pussy Riot’s Nadya Tolokonnikova curated this nationwide public art show from SaveArtSpace, taking over billboard ad space in cities including Atlanta, Birmingham, and New Orleans. The exhibition, up for Women’s History Month, is meant to call attention to the gender pay gap in the art world, where women still account for just 2 percent of sales at auction. Artists Michele Pred and Autumn Breon have three billboards featuring works from their initiative the Art of Equal Pay. Pred launched the project in 2020 on March 15, which is known as Equal Pay Day—because that’s how long the average woman would have to work into the new year to match the salary earned by her male counterparts. The New York billboard features a piece from Holly Silius’s new series, “Phantom Feel,” showing stone sculptures of torsos inspired by writer and actor Lio Mehiel’s top surgery removing their breasts.

In her first solo show, photographer Kia LaBeija presents a deeply personal, autobiographical body of work about growing up HIV positive, the loss of her mother—an AIDS activist who died from complications of the disease—and finding herself in New York’s Ballroom dance scene. (The former “mother” of the House of LaBeiija drag family, La Beija also served as a principle dancer in the pilot for the television series Pose.) Born in 1990, La Beiija shares both childhood ephemera from her personal archives and poetry, video art, and photographs, including self-portraiture.

This just-opened show (March 12) marks the first New York solo exhibition for Nigerian-born artist Peter Uka, who lives in Cologne, Germany. His large-scale portraits and group scenes are inspired by his childhood memories, and feature 1970s-era fashion, hairstyles, and interiors. They celebrate the richness of life with attention to detail, including boys fresh from the barbershop and ready for mass in their Sunday best, characters playing cards on a shaded porch, or a group in disco-style clothing dancing exuberantly. Uka, who is represented by Mariane Ibrahim Gallery, studied at the Yaba College of Technology in Nigeria, and later at Germany’s Kunstakademie Düsseldorf, where he was taught by Tal R and Eberhard Havekost.