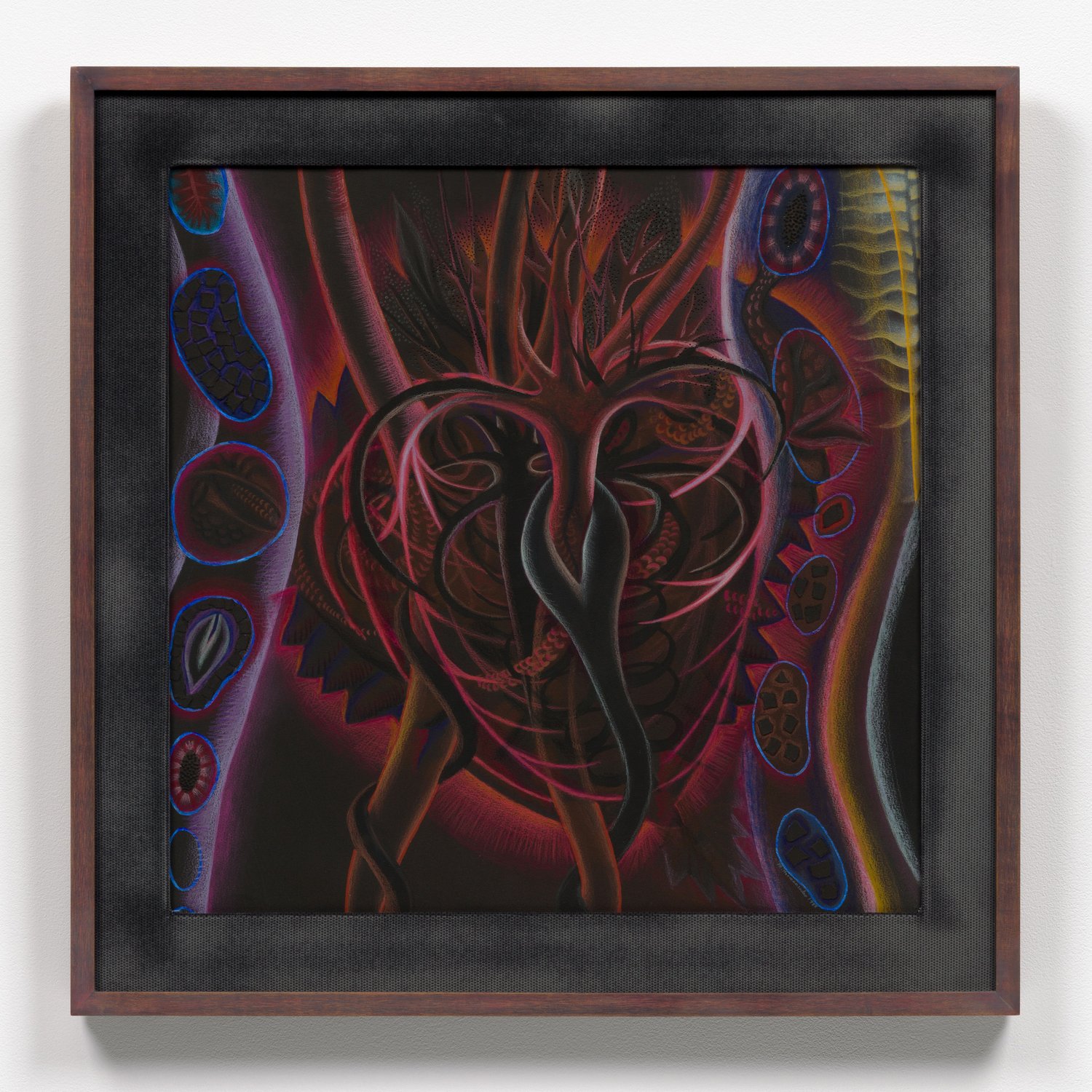 There’s a lot to discover in this timely exhibition, curated by Basquiat scholar Dieter Buchhart. The show explores the role of found objects and unconventional materials in the artist’s short yet prolific oeuvre. A punching bag, a refrigerator, a filing cabinet, a child’s easel, wooden doors, and window frames—Basquiat found all kinds of discarded and dormant items on the streets of New York and in his studio. Their transformation into works of art (some extremely expensive works of art) is exhilarating to behold, a testament to a creative process like no other. Sculpture, painting, and street art all come together in this dynamic, generous survey of 46 works. Some have appeared at auction, others come from private collections, the Basquiat estate, and Fondation Louis Vuitton. A football helmet with lumps of Basquiat’s own hair attached to it is dedicated to Andy Warhol (under the nickname “Skinny”). A punching bag, with old blood spots, is inscribed “Mary Boone,” the artist’s early dealer.

2. “What Is Design” at the Philadelphia Show

In this virtual conversation, Philadelphia Museum of Art assistant curators Alisa Chiles and Colin Fanning discuss how the institution deals with the complexities of a seemingly simple question: “what is design?” Highlighting examples from the museum’s collection and past exhibitions, they explore what it means to collect and display Modern and contemporary design in an art-museum context.

Louise Bourgeois in the studio of her apartment at 142 East 18th Street (ca. 1946). Photo ©the Easton Foundation/Licensed by VAGA at Artists Rights Society (ARS), New York.

The Met celebrates the great French-American sculptor Louise Bourgeois’s under-appreciated paintings in this show of works made after her arrival in New York in 1938 and her embrace of sculpture in the late 1940s. In her first major painting show in 40 years, the museum aims to illustrate how this little-known chapter of the artist’s career contains themes and imagery that stayed with her for decades to come, informing and shaping Bourgeois’s mature work.

Oscar Muñoz, El Editor Solitario (2011), still. Courtesy of the Blanton Museum of Art, the University of Texas at Austin.

4. “Artist-Led Tour of ‘Oscar Muñoz: Invisibilia‘” at the Blanton Museum of Art at the University of Texas in Austin

Colombian artist Oscar Muñoz gives a virtual tour of his first U.S. retrospective, “Invisibilia,” on view at the Blanton through June 5. He’ll speak with curator Vanessa Davidson about how his non-traditional photography-based work is inspired by themes of identity, political freedom, and historical subjectivity.

New York’s Armory Show is still a long ways off, but the September fair is already drumming up the hype with a virtual talk previewing its curated “Focus” and “Platform” sections. For the former, Carla Acevedo-Yates, curator at the Museum of Contemporary Art (MCA) Chicago, is presenting artist projects about how environmental issues relate to race and gender. In the latter, Tobias Ostrander, adjunct curator of Latin American Art at Tate, London, is showing large-scale installations and site-specific works with a theme of “Monumental Change.”

The Public Art Fund gala is reliably one of the most enjoyable art benefit events each year, in large part because guests can participate in interactive games and photo ops designed by artists like Farah Al Qasimi, Wyatt Kahn, and Claudia Wieser—and, if you’re lucky, you could even win an original work of art. (There will also a silent auction of donated works on offer to benefit the nonprofit.) Bold-faced names promised to be in attendance include Bachelor lead Matt James, and one of his former suitors, Kit Keenan, and her mother, fashion designed Cynthia Rowley, plus a bevy of A-list gallerists and artists such as Hank Willis Thomas.

Renee Cox, The Self Similarity of the Selfie (2016). Courtesy of Hannah Traore Gallery, New York.

Drawing on fashion photography and graphic design, as well as her own experience modeling, Renee Cox has created her own unique body of work celebrating Black women. In her first New York solo show since 2006, Cox presents fractal-like canvases that deconstruct the human body, reclaiming control of the representation of her subjects.

Just in time for Easter, Saint John’s is unveiling a 10-foot tall hammered aluminum sculpture in its nave, hanging 90 feet above the ground. An abstract figure of of Christ by Jacques Jarrige, the piece has been shrouded throughout Lent, but will be unveiled ahead of Saturday night’s Easter Vigil mass. The artist also has a simultaneous solo show, “Upstrokes and Downstrokes,” on view April 16 to June 24, at Valerie Goodman Gallery.

Make sure to see Chinese artist Xiao Wang’s solo exhibition at Deanna Evans Projects this week. Based in Brooklyn, Wang gives his canvases a dream-like quality where vegetation in jewel-toned hues of blues and purples obscures figures, usually himself or his friends. “Depicting scenes with maximalist settings, often inspired by real-life protagonists, in obscure, minimal backgrounds, the paintings lead viewers to feel a sense of uncertainty or disorientation,” says the gallery.

10. “Breyer P-Orridge: We Are But One” at Pioneer Works, Brooklyn

Life partners Genesis Breyer P-Orridge (1950–2020) and Lady Jaye Breyer P-Orridge (1969–2007) get their first major posthumous presentation in the U.S. In their joint Pandrogyne project, the two spent 20 years undergoing plastic surgery with the goal of becoming a single “pandrogynous” being named Breyer P-Orridge. Blending pronouns—Genesis went by s/he and he/r—and embracing body modification, the duo defied the roles of biological sex long before the concept of gender fluidity hit the mainstream cultural discourse. The show also includes a large-scale shrine installation designed by Genesis’s daughter Genesse P-Orridge in collaboration with exhibition curator Benjamin Tischer, inspired by Breyer P-Orridge’s travels in the Himalayas and the influence that Buddhism and Eastern spirituality had on their practice.

Anthology Film Archives presents six rarely-screened short films by Jordan Belson (1926–2011), an important figure in 20th-century avant-garde cinema. The evening is timed to the artist’s current solo show of never-before-seen 1970s torn-paper collages at New York’s Matthew Marks Gallery (through April 23). Some of these abstract landscapes were inspired by the view out of his window of San Francisco Bay and the surrounding hills. Other, more otherworldly examples actually served as backdrops in INFINITY (1979) and APOLLO (1982), two of the films included in the program.

In her first show with Hales Gallery, Kay WalkingStick presents paintings of the North American landscape made over the last decade, inspired by her own sense of connection to the earth as well as researching the Native American histories of each scenic vista. Each view is overlaid with Indigenous designs, some taken from the archives of the Smithsonian’s National Museum of the American Indian.

It’s hard to believe that Mnuchin’s collaboration with Fergus McCaffrey gallery represents the first exhibition solely dedicated to the works of New York’s Abstract Expressionist Willem de Kooning (1904-1997) and Japan’s Gutai master Kazuo Shiraga (1924–2008). The formal affinity between these two artists’ gestural bravado is so striking and visceral, you can’t help but wonder: What took so long? For the lovers of abstract painting, there’s probably no better exhibition in town at the moment. Run, don’t walk to catch it before it closes.

PhoebeNewYork, an alter ego character for artist Libby Schoettle, is a highlight of the “New York on Paper” show that ends this Saturday. The character first appeared in collages created with found objects, such as vintage photographs, magazine pages, clothing, old books, record covers, and the occasional Pop art element.

Schoettle is drawn to materials that have been owned and handled by others, and that will remain intact over time (or not). From the streets of New York to Philadelphia, Los Angeles, London, and Berlin, Schoettle reveals her own vulnerability, raw emotions, and witty observations through PhoebeNewYork‘s dark and funny explorations. The striking images are accompanied by thought-provoking bursts of text.

15. “Marcy Hermansader: Shall My Heart Become a Tree” at Mother Gallery, New York

Marcy Hermansader’s first solo show at Mother Gallery includes both recent works and pieces from the late 1980s. Across the years, the seven paintings share a dark fairy tale vibe. “Fragments from postcards act as windows into other realities—specific moments of time and place that can serve as source and center,” Hermansader says in her artist statement. “Leaves may appear jewel-like in colored pencil, painted thick or thin with gouache or acrylic, embossed with a hard pencil in tiny patterns, or dotted with fingertips dipped in paint.”

This weekend is your last chance to see the fifth edition of “Greater New York,” highlighting the work of New York City artists, including Yuji Agematsu’s tiny sculptures made of trash collected on the city streets in 2020. Each piece—one for each day of the year—is a delicate arrangement placed inside the cellophane wrapper of a cigarette carton, highlighting the unexpected beauty to be found even in our unwanted refuse.

David Benrimon Fine Art is celebrating Fernando Botero’s 90th birthday with a show at its East 57th Street gallery, plus a public art installation in the Meatpacking District of a bronze sphinx in his signature larger-than-life style.