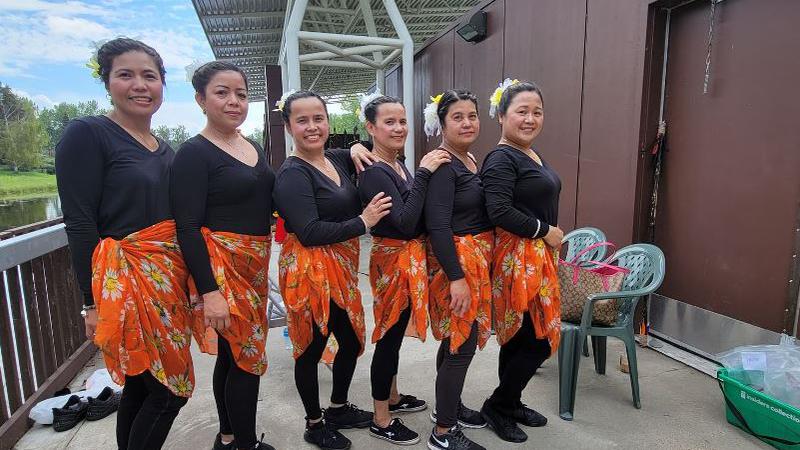 “We were participating in a lot of local events, and then COVID-19 took us down. This year, we’ve managed to put on this first ever event, which we like to call Pinoy Fiesta. This is very common in the Philippines,” she said.

“This event is also a tribute to Temporary Foreign Workers, because being one is a journey and a challenge. That’s why we have other resources here for them to access. When you come to Canada using this program, you don’t have much of anything. I had luggage, $50 and my passport, but now I’m stable and I have my family here. It’s even where I met my husband.”

Rosales, a worker at Red Deer Regional Hospital, said for those in and outside the Filipino community who need help with the Temporary Foreign Worker program, aid is available through Catholic Social Services.

Lhen Ramiso has lived in Red Deer for 17 years, and also came here under the TFW program, starting out with Olymel where she’s now a lead hand.

Ramiso oversees the Oly Girls dance group, which performed for the first time at Saturday’s event.

“It’s really big for the group to do this. It’s a pleasure to share our culture, and we’re very proud to put a smile on people’s faces coming out of difficult times,” she said.

“When I came here in 2005, it was difficult having to leave my family back home, including my then nine-year-old daughter who I was able to get here five years later. It was such an overwhelming experience.”

Ramiso added she’s thankful that Canada allows for this type of opportunity to build a better life.

“Times are hard back home. Our hourly wage here is our daily wage there. It’s kind of difficult,” she points out. “Here, you can stay in a house with one person per room, while there it can often be 16 people in one house with two bedrooms, something I experienced. Now I live good and I’m very thankful to Canada.”

Red Deer-Mountain View Member of Parliament, Earl Dreeshen, has seen the TFW program undergo changes and scrutiny since becoming an MP in 2008. The program itself was created in 1973.

Dreeshen says the program is positive but unfortunately his office hears about a lot of people getting stuck in the system.

“We’re trying to prevent people from falling through the cracks, but we also hear concerns about people who need workers on the farm helping with planting, for example, but folks are getting lost in the system. Folks here are trying to make sure people are aware of this and what they can do,” said Dreeshen, who offered remarks on stage Saturday.

“It’s important employers know they’ll have enough workers, meaning it isn’t good when it takes too long to get people in. Especially on the agriculture side, folks who bring in Temporary Foreign Workers know the system and what they need to provide so they can have a solid workforce.”

Sometimes restrictions are also unclear for employer and employee, he noted, adding that clarity would be good on that front.

“The program’s objective is good. Many people, however, think the intent is just for people to use it to become Canadian citizens and bring family members here, but that’s not the case at all. Many come here and send money back home, giving their families better opportunity in their own country,” he said.

“I’m happy that it has helped so many families, not just here, but back home for folks. We certainly need great workers, and people who are committed to their communities. They are a hardworking group, they are people of faith, and they contribute in all the ways they can. It’s important to them, and it should be important to everyone.”

Upwards of 100,000 TFWs come to Canada annually under the program which allows employers to hire international workers if there are no Canadians or permanent residents available.