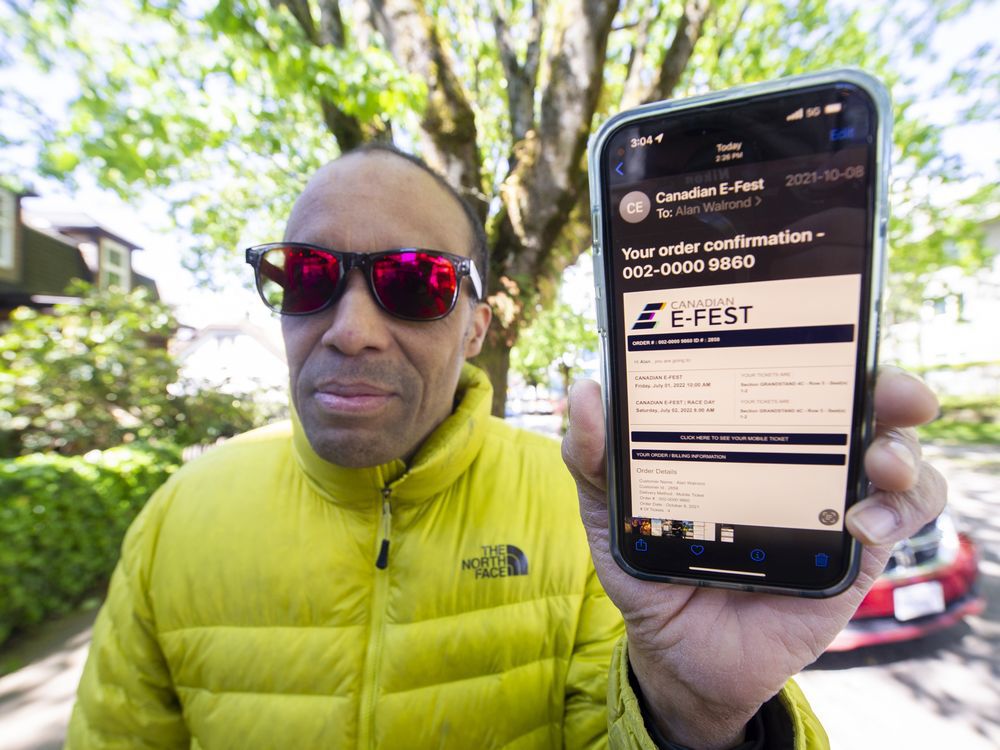 Disappointed fans who bought tickets for the cancelled 2022 Vancouver Formula E car race are frustrated they’ve been told to wait for refunds.

Last October, soon after tickets went on sale for the inaugural Canadian E-Fest race event, Alan Walrond spent $682.50 for a pair of VIP, two-day grandstand seats. Organizer said they sold 33,000 tickets for the event, which was originally scheduled for the Canada Day long weekend this year but was abruptly called off in April, less than three months before race day.

Last week, Walrond and other ticket-holders received an email from E-Fest organizers, saying: If you would like to carry your tickets over to the 2023 event — no action is required. Your tickets will automatically be carried over.”

Ticket-holders unable to attend next year’s edition will receive refunds, the email said, and “the refund process will be communicated after the announcement of the 2023 Canadian E-Fest date.”

But, to Walrond, “that makes no sense.”

Other frustrated ticket-buyers also contacted Postmedia News, wanting refunds and worrying about their money. They all received the same email from E-Fest organizers stating: “We have logged your request for a refund. We will begin the refund process once the postponed date is announced this coming June.”

It would have been Vancouver’s first time hosting an event for the Formula E Championship, an electric car race series that launched in 2014 and this season was intended to include 16 races in cities around the globe. The Vancouver event was being organized and promoted by Montreal-based One Stop Strategy Group, or OSS.

No one from OSS was available for an interview Thursday but a representative sent an emailed statement to Postmedia with the same language from last week’s email to ticket-holders, saying the 2023 Canadian E-Fest “will be a spectacular event in Vancouver.”

But it doesn’t yet appear to be confirmed whether there will be a Formula E race in Vancouver next year at all.

Last week, international motorsports news outlet The Race reported: “The possibility of a Vancouver E-Prix taking place in 2023 depends upon if the promoters of the troubled event are able to give assurances that it could go ahead before the World Motorsport Council convenes next month.”

Formula E COO and deputy CEO Alberto Longo told The Race that this year’s Vancouver event’s cancellation was “very unfortunate,” saying: “It was a big failure from the promoter.”

“The main reason was actually one of the stakeholders, which basically were going to do all the garages, we were told that the contract was signed a while ago, and it wasn’t,” Longo said.

Formula E didn’t reply to a request for comment Thursday.

In the weeks leading up to the 2022 event’s cancellation on April 22, Postmedia reported that the OSS Group had missed deadlines at city hall and hadn’t submitted key documents, including proof of insurance and signed contracts with the owners of private properties where the event was planned to take place.

Before the event’s cancellation last month, the City of Vancouver confirmed the OSS Group had paid two tranches of security deposits, totalling $500,000, but had failed to submit other documents required before an event permit would be issued.

In response to Postmedia’s questions Thursday about the status of the deposit money and the prospect of a 2023 event, a City of Vancouver representative sent an emailed statement saying: “OSS Group has recently initiated a discussion with the city about the possibility of staging the Formula E event some time in 2023. We anticipate that OSS’s security deposit for the 2022 event will be part of this discussion.”

In an emailed statement, B.C.’s Ministry of Public Safety and Solicitor-General said the Business Practices and Consumer Protection Act has refund provisions that may apply in situations where a ticketed event is cancelled.

For his part, Walrond hopes Vancouver does eventually host a Formula E race, and he would love to attend. But, he added: “People have lost confidence. If they have (the event) and I go next year, I’m buying a ticket the day of.”

More news, fewer ads: Our in-depth journalism is possible thanks to the support of our subscribers. For just $3.50 per week, you can get unlimited, ad-lite access to The Vancouver Sun, The Province, National Post and 13 other Canadian news sites. Support us by subscribing today: The Vancouver Sun | The Province.

Sign up to receive daily headline news from the Vancouver Sun, a division of Postmedia Network Inc.

The next issue of Vancouver Sun Headline News will soon be in your inbox.