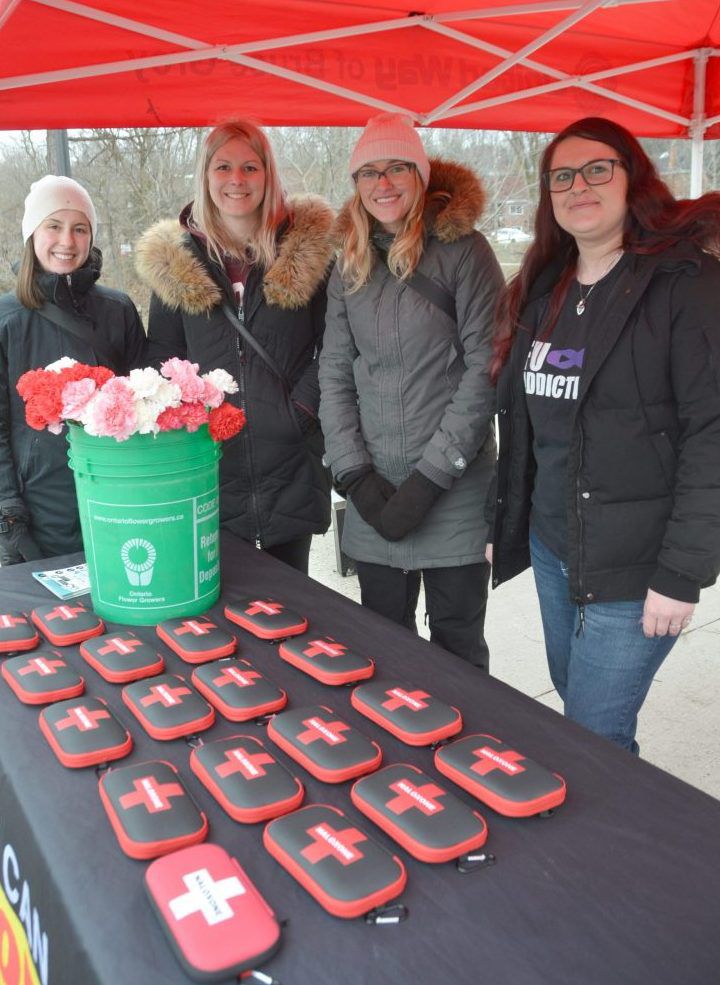 Gelja Sheardown was brought to tears by the number of local lives lost due to opioid overdoses since the start of the COVID-19 pandemic just over two years ago.

“Forty-eight. I didn’t realize it has been that many. That is a lot,” Sheardown said after hearing the number of Grey-Bruce residents whose deaths had been confirmed as being a result of an opioid overdose.

Alison Govier, who is the co-ordinator of the Community Drug and Alcohol Strategy, said Saturday during the We Will Remember Them opioid overdose awareness event in downtown Owen Sound on Saturday that more urgency needs to be put into addressing the crisis.

“What we have done so far it hasn’t worked,” said Govier. “Since the beginning of COVID we have lost – and this is an underestimation – at least 48 community members.

“These are our husbands, our neighbours and our friends.”

Govier said they are calling on all levels of government to prioritize the opioid epidemic with a determination similar to that that has been shown during the virus pandemic.

“We have learned so much from COVID how if all levels of government and across all sectors and agencies and community we work together then we can solve big complex problems,” Govier said.

On Saturday, Govier thanked Sheardown for the work she has done to raise awareness and in doing so, helping to save lives.

“I have so much appreciation for Gelja in bringing this into the forefront of awareness with events such as this,” Govier said.

It was two years ago on Sunday that the opioid epidemic impacted Sheardown in a very personal and tragic way when she lost her husband Barrett Warwick to a fentanyl overdose.

On Saturday she was at the Owen Sound Farmers’ Market for the awareness event, meant to shine a light on the ongoing epidemic, highlight the local supports available, and give people a chance to reflect, remember and honour those loved ones they have lost.

Participants were invited to take a carnation, walk the block that includes the 8th and 9th street bridges and then drop the flower into the river, to symbolize the loss of those who have died and are gone permanently from the community. Representatives from the Grey Bruce Health Unit, Safe ‘n Sound, United Way of Bruce-Grey and Community Drug and Alcohol Strategy were on hand providing information and resources. Life-saving Naloxone kits were being made available.

The event was started last year at the urging of Sheardown, who wanted to shine a light on the crisis and help to prevent others from going through what she, her three young children, and the rest of her family and friends have had to go through.

“It is about bringing awareness that this is a big problem in Grey-Bruce and addressing all the things that people can do to try to help if they know somebody who has problems or is needing help,” Sheardown said. “It is very important for me to raise awareness after losing my husband.”

Warwick died in the family’s home in the early morning hours of March 27, 2020 after taking fentanyl, a powerful opioid that is 50 to 100 times more  powerful than morphine. He suffered from depression and had a back injury and had been using painkillers like Percocet to ease the pain of both. Sheardown was unaware of many of the struggles her husband was going through and his death was a shock to her.

While Warwick’s death has been very difficult for Sheardown and her family and friends, she said they all have made it a priority that the opioid epidemic be a major focus in the community.

“We don’t want it to be silenced anymore and we want to end the stigma around drug addicts,” Sheardown said. “These are hard working individuals, these people have families. They are good people who just get caught in a bad place and it is usually because of past trauma, mental health issues and stuff like that.”

Sheardown, who has suffered with addiction in the past herself and managed to beat it, wants to be able to lend her voice to be able to help as many people as possible.

“I just want everyone to know that the clean, sober life is so much better and we can all get there,” Sheardown said.

Govier’s position as co-ordinator of the Community Drug and Alcohol Strategy is resourced by Grey and Bruce counties and embedded in the Addictions Services team of the Canadian Mental Health Association of Grey Bruce. The strategy includes a network of community partners who work towards improving the quality of life for local individuals, families and communities by reducing the health and social harms associated with substances.

The strategy has developed a series of calls to action to address the crisis.

Locally that includes working with community partners to expand and enhance harm reduction outreach as well as assessing and incorporating harm reduction into current policies and practices.

At the provincial level, they would like to see a task force formed that would have monitoring and surveillance through engaging people with lived experience to understand the full magnitude of the problem to create solutions.

They are also calling on the provincial and federal governments and other regulatory agencies to take the necessary steps to implement and support safe supply initiatives.

Also at the federal level, the strategy is asking the drug poisoning crisis to be declared a national emergency so the crisis is met with the urgency it deserves, and that an action plan be developed to address the factors that lead to substance use and abuse and obstruct recovery.

Govier said the decriminalization of drugs for personal use and further development of a safe supply program is also important. She hopes initiatives at the local level  to decriminalize simple drug possession and focus on the trafficking of drugs trends across the country.

“The problem is that drug use is criminalized, so there is a danger and a risk attached to disclosing your drug use, so it is really hard to get an understanding of how many folks are at risk over overdose, because according to our federal prohibition laws they are committing a crime” Govier said. “That drives everyone into the shadows.

“It is a stigma in society and it is a product of our policies.”

Govier said that even when it comes to reporting deaths from opioid overdoses, there is at least a six-month lag as they wait for coroner data to be released.

“It is really hard to respond appropriately and quickly enough if you don’t have an understanding of the problem,” said Govier. “What we can do is listen to people who are most directly affected and we can urge our government to really take this seriously.”

Joan Farley was at the walk on Saturday in memory of her son Grant who died in 2018 of an opioid overdose.

She also wants to bring more awareness to the opioid epidemic and the impact it is having on people.

“We need to do more to educate people and to help save them,” Farley said. “I think we need to raise awareness around stigma, that from my understanding, a lot of people don’t go for help because of stigma. That needs to be addressed.”