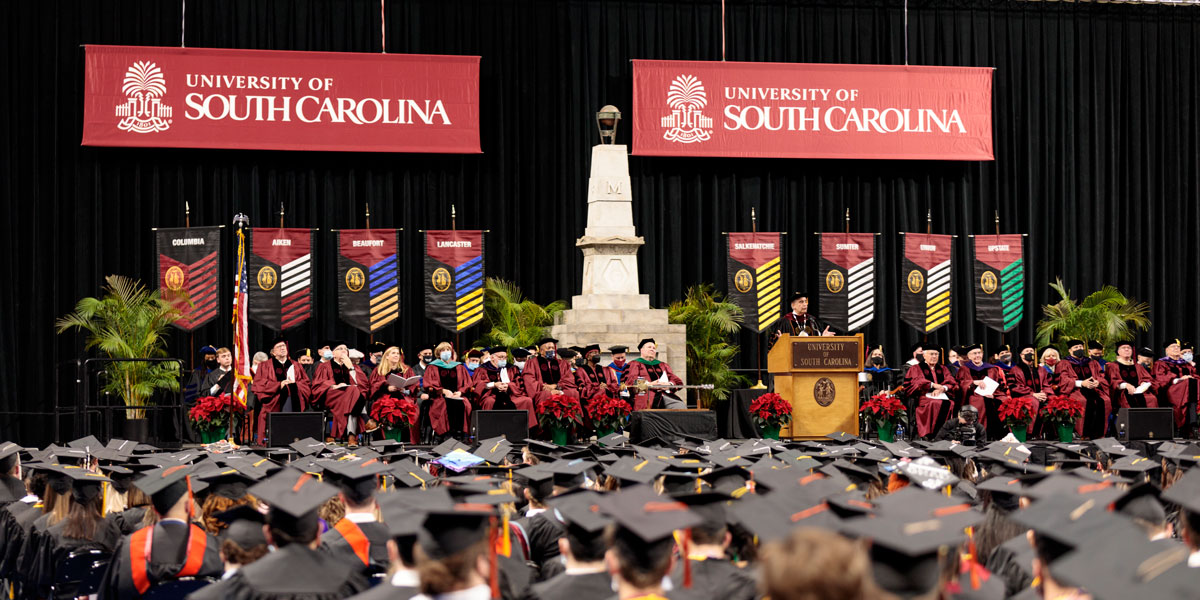 Thousands of University of South Carolina students will walk across the stage this
weekend and join the ranks of Gamecock alumni.

But long before the ceremonies begin, a band of staff from around the university pull
together behind the scenes to make sure each commencement ceremony is a smooth one.
From hanging the banners, to making sure the sound is pitch perfect, to being sure
every graduate is in the right seat — it’s a massive undertaking by faculty and staff
from around the university.

Here is a look at just a few of them.

Andrew Fink earned his master’s degree in education and has worked at the university
for 25 years – nine of those in the registrar’s office. During commencement, he serves
as the lead marshal for the pre-ceremony and ceremony at the Colonial Life Arena;
you’ll see him and other registrar staff members dressed in garnet robes, directing
graduates on the floor and helping friends and family in the audience.

Andrew Fink serves as the lead marshal for commencement ceremonies in the Colonial
Life Arena.

Duties at commencement: “As the lead marshal, I direct all of our on-site commencement staff. That includes
11 ushers, two seat assignment staff members, someone to help with accessibility issues,
four who help students with academic regalia, and then people who staff program tables
in the lobby.”

What commencement means: “It symbolizes the culmination of many years of hard work, and it’s a time for students
and family and friends to recognize and celebrate success. And it’s just really a
lot of fun to see students come here to Carolina and work so hard, and then finally
get to walk across that stage and graduate.”

Sharing the workload: “It takes a lot of dedicated people to make this happen. There are many, many, many
people that work prior to commencement to put everything together. It’s a large team
effort.”

As production manager for Colonial Life Arena, Vinny Hourigan takes care of all the
theatrical aspects of commencement – meaning he’s responsible for making sure the
arena looks and sounds perfect for the thousands of grads marching across the stage
each December and May.

He also is responsible for the sound system, making sure everything comes through
loud and clear. Hourigan started at UofSC in 1999, working at the Carolina Coliseum
before CLA opened. “When I first came here, I didn’t understand the importance of
commencement,” he says. “I learned very quickly. It is truly the most important event
I do all year, and it feels that way going in. And if everything goes well, it feels
good on the way out.”

Getting set for the big event: “We hang 80-foot wide by 60-foot high heavy velour curtains. And once those are
hung, we put the two USC banners on the opposite sides of the (replica McKissick monument)
statue at center stage. We can usually do that in about an hour and 10 minutes. And
these days, most of the time, it’s at 4 o’clock in the morning.”

The view from the mixing booth: “It’s probably the best seat in the house. It’s unobstructed and I can see everything
that goes on.”

Laveta Gibson doesn’t play an instrument or sing a note at commencement, but as executive
assistant to the dean at the School of Music, she makes sure the right notes get played
by the right people at the right time. And there’s a lot of coordination.

Laveta Gibson, executive assistant to the dean at the School of Music, coordinates
the performers for commencement ceremonies.

“The same faculty have pretty much done it for years, so they know that they’re going
to get an email from me saying, ‘I need a string quartet’ or whatever I need for each
ceremony,” she says.

Making the music: The music school’s voice faculty members select students who sing the national anthem,
preferably a student in the graduating class, while the string quartet, band and orchestra
also have roles in the various ceremonies.

A winning soundtrack: “I think it’s nice that the School of Music is represented everywhere at commencement.
I don’t think there is another school that’s really represented like that. Plus, you
remember the sounds from commencement. I mean, I remember people that sang at my commencement.”

As director of live productions for the university’s athletics department, David Cockfield
produces SEC network broadcasts for sports including soccer, baseball and basketball.
During commencement, Cockfield sits in the control room 2 miles away at Williams-Brice
Stadium, making sure the thousands in the crowd at commencement ceremonies can see
photos, read facts about the university and watch the live video feed as they sit
in the Colonial Life Arena. He also is responsible for video boards for football,
basketball and baseball.

David Cockfield controls the CLA video board from the control room at Williams-Brice
Stadium.

Moving to CLA from the Coliseum in 2002: “There was this nice video board they wanted to use, which means a control room and
cameras and people to make all of that happen.”

Why commencement matters: “When it’s sports, especially right now that we’re in baseball and softball season,
you get to play the next day. With commencement, you usually only walk across that
stage one time, so you would like to make sure that you get pictures of those people
walking across the stage. It’s important. It’s a memorable event. So you want to get
it right.”

Mark Smith is the curator for exhibition and collection management at McKissick Museum
on the Horseshoe. He’s also a product of the university, having earned a B.A., M.A.
and Master of Library and Information Science, which makes his role as keeper of the
university’s ceremonial mace and medallion that much more meaningful. “I’m an alumnus
myself,” he says, “so I think having the mace is a very interesting part of our university
tradition.”

Mark Smith, the curator at McKissick Museum, keeps up with the mace and medallion
that play a role in the commencement ceremonies.

About the mace: Along with the medallion, the mace was presented to the university in 1967, crafted
by a British silversmith. It’s nearly 4 feet long and features the seals of the United
States, the state of South Carolina and the University of South Carolina.

Keeping up with the mace: “We keep it polished, get it repaired, whatever is needed. It is in the case and
secured on our first floor (at McKissick), so people can take a look when they walk
through. For commencement, the police sign it out, we inspect it, and they deliver
it to commencement. Everyone has to have on white gloves when they touch it; we don’t
want fingerprints on it because it is silver with some gold. When commencement is
over the police bring it all back and we put it back on display.”

Share this Story! Let friends in your social network know what you are reading about