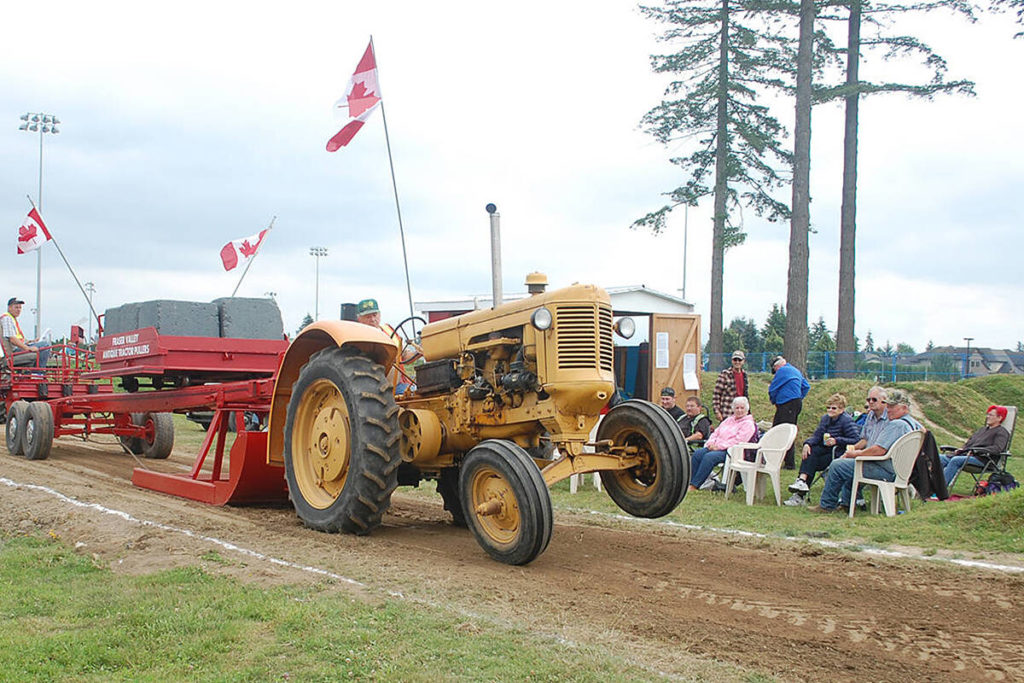 This year, the tractor pull is back at the Aldergrove Fair Days.

After two years of cancelled or scaled-back events due to the COVID-19 pandemic, the July 14-17 fair will see the return in full of many traditional events.

“That tractor pull is back to its traditional format,” said the fair’s Mike Robinson.

That means multiple weight classes, ranging from the tiny “garden tractors” up to the big full sized farm tractors, will be on hand on the Kinsmen Park Field near the Aldergrove Community Secondary.

The tractors will be over on the south side of the fairgrounds near the BMX track, Robinson said.

In tractor pull, a tractor hauls a large sled, with wheels at the back, that has a significant amount of weight in it. The weight doesn’t stay still, either – it moves forward during the course of the pull, so it weighs down the portion of the sled that drags on the ground, increasing resistance the longer the tractor lasts.

The tractor pulls at the Aldergrove Fair will take place over a 250 foot course. There are usually about 40 competitors, Robinson said.

The fast draw competition, featuring holsters and six guns, will not only be back, the celebrity edition will take place. Local politicians, businesspeople, and other prominent Langley folks will get to test their speed with a shooting iron in front of the crowds.

Also returning will be the dog agility shows, which weren’t present at all in last year’s smaller fair.

The agility show has been moved to the northeast corner of the site, where there’s a little hill for people to sit on and watch events. The number of dogs competing in the event, which involves pups completing an obstacle course, hasn’t been determined yet.

Back for the first time in a while is also Mike the Reptile Guy.

READ ALSO: A bigger and better Aldergrove Fair is in the works

PREVIOUSLY: ‘Drive up’ version of Aldergrove Fair is a hit

“He’s got a phenomenal collection of snakes and reptiles,” said Robinson.

International Movie Services will also make a return with a collection of vintage and antique military equipment and vehicles. The local company rents out everything from trucks to armoured vehicles to uniforms for movies, and shows off parts of its collection at local events including the fair.

You never know what they’ll turn up with, said Robinson.

“They could bring out a new vehicle every day for a year.”

There will also be the biggest vendor area ever, and while there isn’t a full midway, there are a couple of interactive game sites, including a climbing wall and a bungee ride that launches people up.

Taking part in many of these events isn’t out of the reach of members of the general public, Robinson noted, although it might be too late to sign up for this year’s fair.

Local clubs run the fast draw and dog agility events, so taking part is a matter of joining those groups, Robinson said.

“Next year, you could be bringing your dogs out.”

Have a story tip? Email: matthew.claxton@langleyadvancetimes.com