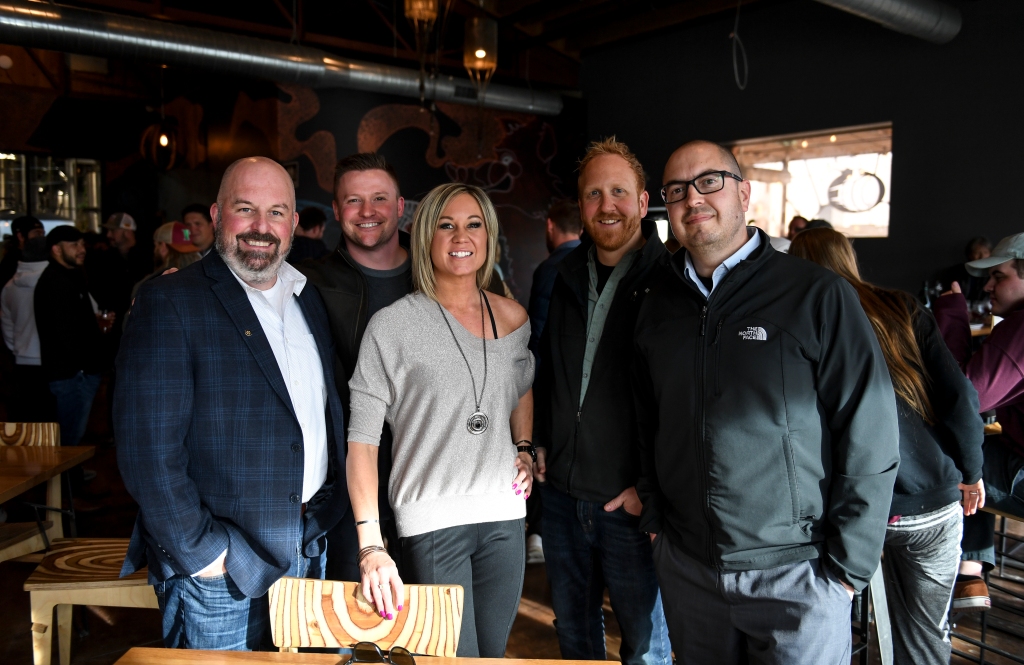 What began as a way for the community to support local businesses, restaurants, breweries and distilleries in Greeley has grown into a much-anticipated monthly networking event where many have formed friendships and business relationships.

The Greeley Mob Mixer, a monthly networking event, is the brainchild of Katie Gale, Ryan Roth, Beryl Durazo, Brady Hull and Emilio Vallejos. The five friends come from different backgrounds and businesses such as insurance, finance, the nonprofit sector and radio broadcasting.

“What we really wanted to do was bring the community out and have them start frequenting restaurants and other businesses that were really slow,” Gale said. “We knew they (local businesses) were having some slow times and it was hard to get business during COVID, so we wanted to help boost business.”

The group came up with the name “Greeley Mob Mixer” since the event would be like a flash mob-style gathering set for a pre-planned day at a specific location in Greeley. And with Wednesdays typically being a slower day during the week for businesses, Gale and the crew decided to host the event on Hump Day.

The group’s most recent mixer took place Wednesday at WeldWerks Brewing Co., 508 8th Ave., with nearly 100 people shuffling into the brewery to enjoy some craft beer and food from the brewery’s new restaurant, The Annex. As bartenders kept the taps flowing filling up glasses, the kitchen was busy cranking out orders of fries with lemon aioli, pork belly lettuce wraps and other delectable eats.

In addition to WeldWerks, the group has hosted events at John Galt Coffee Co., The Kress Cinema and Lounge, Stella’s Pinball Arcade and Lounge and Crabtree Brewing Company.

In the beginning, the five founders figured they might get a draw of 15-20 people to each event. But news of the mob mixer spread like wildfire, and now, events draw two to three times that amount each month.

“The ability to mob a local business is awesome, and to give a business that exposure, especially when we were coming out of COVID, and have people spend money is really something special,” Roth said. “We have developed a really loyal following.”

As mobbers made their way through the door at WeldWerks, Roth was busy greeting them and encouraging attendees to toss a business card into a bucket for a chance to win prizes.

First-timers and regulars were both welcomed with open arms and enthusiasm.

There are no dues, fees or cost to attend the mixers. All the founders ask is that you support the business hosting the event by purchasing food, drinks or other items. Mobbers can attend as many, or as few, mixers as they wish, and registration is not required to attend — just show up, meet people and have a good time.

“If you can make it great, if not, there will be another one next month,” Roth said. “It’s been amazing, and it truly is the highlight of my month to see this thing we have created and see these individuals together that might not have otherwise met one another and connected.”

The best part of attending mob mixers is that there’s no pressure to get up in front of everyone to give a 45-second elevator speech about who you are, what you do and why you are at the event.

The group is also working on other ideas for mixers such as a poker walk in downtown Greeley in August.

“We just want to mix things up, socialize and have fun,” Roth added.

Mixers take place at 5 p.m. the second Wednesday of the month. Locations of the mixer are posted on the group’s Facebook page at https://bit.ly/37hZdY8.

For more information, questions or to inquire about becoming a host business for an event, email the Greeley Mob Mixer at greeleymobmixer@gmail.com.