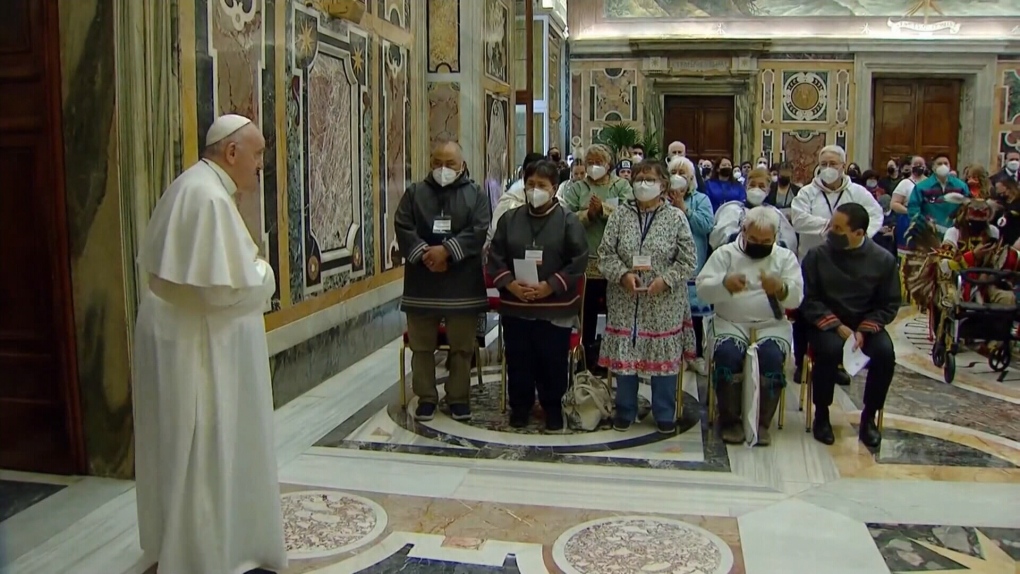 Pope Francis is continuing his pilgrimage of penance in Canada with a visit to Quebec City.


A plane carrying the Pope left Edmonton Wednesday and is headed east for the next leg of his reconciliation visit.


However, the event at the Citadelle de Québec has been pushed back an hour due to a delay involving a flight carrying Indigenous leaders.


Organizers say the event is now scheduled to begin at 4:40 p.m. and the Pope’s tour of the Plains of Abraham will be pushed back to 6:15 p.m.


The Canadian Conference of Catholic Bishops reports that the Pope plans to listen to and speak with representatives of different Indigenous communities to address the impacts of colonization and the Roman Catholic Church’s involvement in the residential school system.


The visit is also supposed to be an opportunity to connect with the Catholic community in Canada.


The Pope is scheduled to first meet with government officials and deliver a public address on the Plains of Abraham.


Thursday, he will go to the Sainte-Anne-de-Beaupré Basilica, where he will celebrate mass at 10 a.m.


Between 10,000 and 15,000 people are expected to attend, with space for guests inside and outside the basilica.


The mass will also be broadcasted on the Plains of Abraham.


Later in the afternoon, the Pope is slated to go to the Cathédrale-Basilique Notre-Dame de Québec to meet with bishops, priests, deacons, seminarians and more.


Friday, Pope Francis is expected to have a private meeting at 9 a.m. with members of the Jésus à l’Archevêché de Québec.


At 10:45 a.m., he will meet with a delegation of Indigenous people from eastern Canada — his last activity in Quebec City.


At 4:15 p.m., the Pope will meet with former students of residential schools in Iqaluit before participating in a public event presented by the Inuit community.


A departure ceremony for the Pope is slated to take place at 6:15 p.m. at the Iqaluit Airport, ending his stay in Canada as he heads back to the Vatican.


— This report by The Canadian Press was first published in French on July 27, 2022. 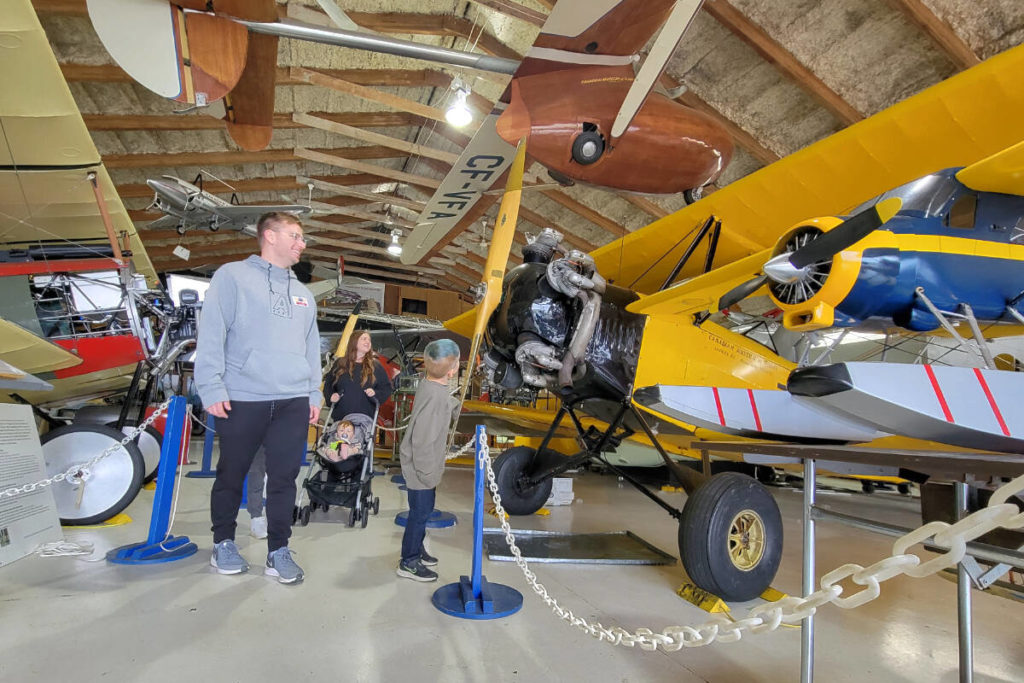 About 140 people, double the usual Sunday numbers, visited the Canadian Museum of Flight at the Langley Airport Father’s Day event on Sunday, June 19, when dads get in free. (Dan Ferguson/Langley Advance Times)

A young visitor tries giving a propeller a spin at the Canadian Museum of Flight at the Langley Airport Father’s Day event on Sunday, June 19. (Dan Ferguson/Langley Advance Times)

Living near the Langley airport, young Dhairya Agrawal has developed a powerful interest in aviation.

Mom Shubhangi says when her 19-month-old son hears an airplane passing overhead, he gets excited, which is only a problem when it’s nap time.

Dhairya Agrawal was delighted with the new kid sized plane at the Canadian Museum of Flight on Father’s Day. Mom Shubhangi said her 19-month-old son is a huge fan of airplanes. (Dan Ferguson/Langley Advance Times)

On Sunday, June 19, Dhairya was in his element as the Canadian Museum of Flight at the Langley airport hosted its annual Father’s Day event, where dads get in free.

The beaming boy posed for a picture in one of the museum’s newest additions, a small green kid-sizes plane in the outdoor display area.

ALSO: Canadian Museum of Flight volunteer was there from the beginning

Canadian Museum of Flight president Bruce Friesen said there were 140 visitors during the five-hour event, “about double our typical Sunday.”

Elements of another in-progress museum attraction were on display as well.

“Canadian women in aviation” will feature photos and biographies of dozens of women, ranging from Roberta Bondar to Langley airport manager Carol Madill.

“People can come and enjoy stories of the women, past and present, who contributed to aviation in B.C. and Canada,” said Friesen.

It houses over 25 aircraft ranging from a WWII Handley Page Hampden to a T-33 Silver Star.

Have a story tip? Email: dan.ferguson@langleyadvancetimes.com 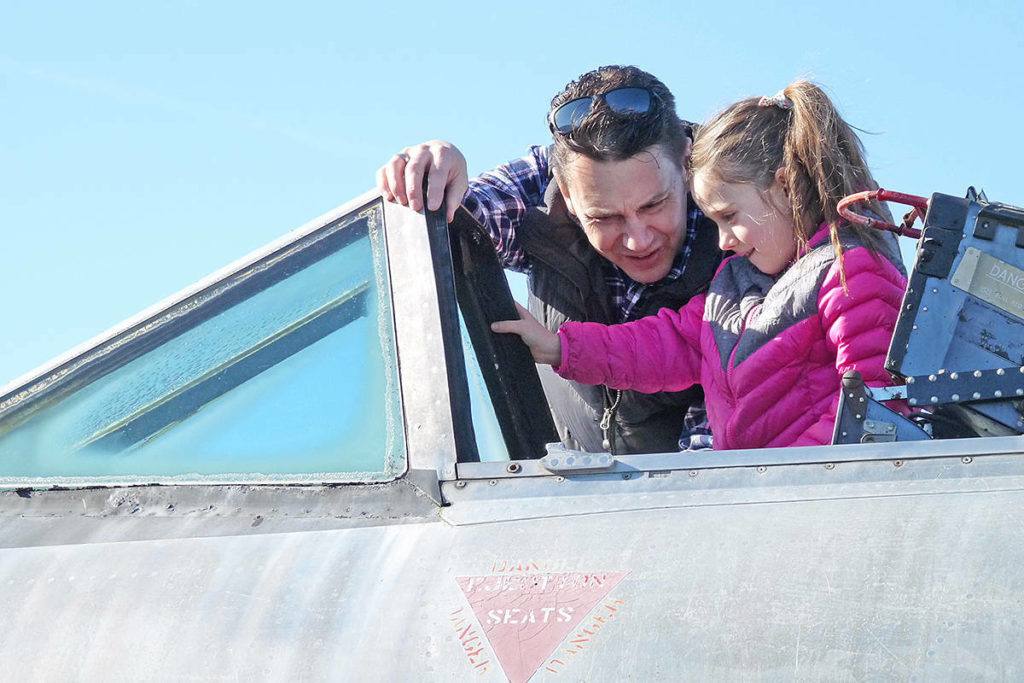 As members of the Royal Family tour Canada this week, news of a queen-inspired gift arrives in Langley.

As this year marks the platinum jubilee of Queen Elizabeth II, the federal government announced $2.14 million funding for community events and projects across the country – including an upcoming Canada Day celebration in Langley.

The Canadian Museum of Flight in Langley received $4,100 to host a family-oriented commemoration on July 1, one of many grants announced by Minister of Canadian Heritage Pablo Rodriguez.

“For more than 70 years, Her Majesty Queen Elizabeth II has been a model of dedication and a privileged witness to the growth of and accomplishments of Canadians, and to the values that unite us,” Rodriguez said.

“That’s why I’m pleased to announce the funded projects that will allow Canadians across the country to learn more about our sovereign, celebrate this historic anniversary and reflect on the meaning of public service in today’s society.”

The federal government launched the tribute on Feb. 6, and will host numerous events including the Royal Tour, a national illumination initiative, exhibits, commemorative gardens, educational resources, and a commemorative stamp and coins.

There will be a total of 360 community events and three major national projects.

Funds for the flight museum will be utilized towards a display connecting the Crown to aviation in Canada, and how Queen Elizabeth has connected with Canadians, according to the museum website.

The theme of the Canada Day festivities and display will explore each of Queen’s visits to Canada, and the specific use of aircraft to complete each tour.

Prince of Wales and the Duchess of Cornwall kicked off the three-day royal tour Monday in St. John’s and are travelling to Canada’s Capital Region today (Wednesday, May 18), followed by Yellowknife and the Northwest Territories on Thursday.

RELATED: Vimy Ridge flyby tribute just not in the cards?

Is there more to the story? Email: news@langleyadvancetimes.com