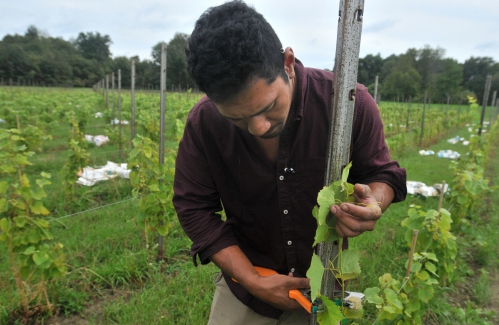 HATFIELD — After two seasons of concerts and similar large-scale events bringing visitors to Black Birch Winery, the business is having its site plan revised to be in compliance with town rules when performances resume this year.

The Planning Board this month unanimously approved the amended site plan for the 108 Straits Road property that will extend Black Birch’s hours from 10 a.m. to 10 p.m. and allow the winery to accommodate 12 large events per year, each of which draws between 150 and 300 people. An unlimited number of smaller events that are capped at 90 people also will be permitted.

“It will offer us flexibility in what we do and what we offer,” co-owner Michelle Kersbergen told planners at the board’s Feb. 2 meeting. She added that, in addition to the concerts, there will be an additional one or two events per week, mostly workshops, wine dinners and other smaller-scale functions.

That came in response to Planning Board member Jimmy Tarr noting his worry about giving Black Birch permission to have events throughout the year. “That gives me a little bit of a pause — theoretically you could have an event there every single day,” Tarr said.

The board’s decision revises the original special permit issued to Black Birch when it came to Hatfield in 2017. The business will continue to have hours of operation for its tasting room for noon to 6 p.m. Wednesdays through Saturdays, and noon to 5 p.m. on Sundays., as well as on holidays, as appropriate.

The amended site plan follows from the Select Board issuing an entertainment license to Black Birch last June that allowed concerts, put together by Signature Sounds, to be held from noon to 9 p.m.

Kersbergen said that Signature Sounds, as it schedules concerts this year, will cap tickets at 250.

The main focus for the business, she said, remains educating people about the winery through tours and samples, and Kersbergen said there is no intention to expand the tasting room.

Meanwhile, a 1.8-megawatt alternating current solar project, with an associated 1.65-megawatt battery, is being proposed for an 8- to 9-acre portion of a 30 acre Routes 5 & 10 parcel.

The wooded site, with an address of 121 West St. and situated between Rocks Road to the north and Chestnut Street to the south, features a small single-family home that would be demolished to make way for the project.

Vegetation would be cleared from where the solar is built on the parcel, which is zoned as light industrial at the front of the property and rural residential at the rear.

“This could be the extent of the development,” consultant Russ Burke told the board.

Board member Bob Wagner said “front-loading makes a lot of sense,” noting that it would be more challenging to have the solar extend to the rear of the site, which features fragile land and a wildlife area as the grade changes and there are rocky outposts.

Wagner noted that the property is likely to be developed in the future with the ongoing extension of water and sewer lines along the state highway.

Burke said he anticipates filing plans for the project by early March and scheduling a hearing in April.