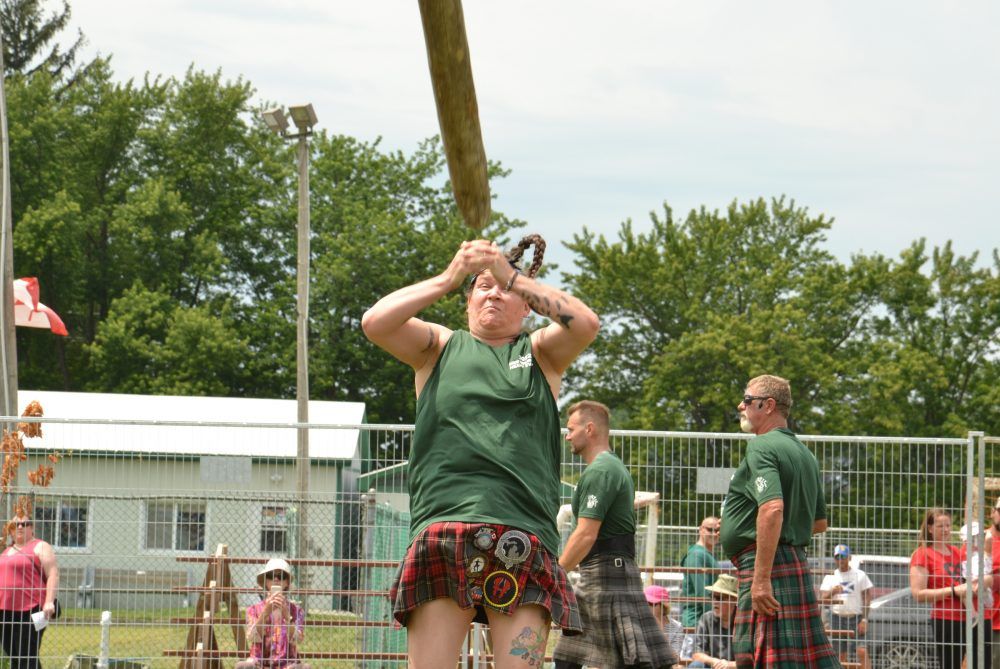 Heather Boundy, the woman who currently holds the world record for most caber tosses in three minutes, returned to the Scottish heavy events circuit after two-year pandemic pause at the Embro Highland Games Friday.

A minor celebrity in the world of Scottish heavy events made her return to the sport after a two-year pandemic pause at the Embro Highland Games Friday.

Heather Boundy still holds the Guinness World Record for being the woman who tossed the most cabers in three minutes. To establish a world record for women’s caber toss – there wasn’t one previously – Boundy threw 15 cabers, which can be anywhere from 14 to 17 feet long and weigh between as much as 90 pounds, in 180 seconds in September 2016.

On Friday, Boundy, who lives in Lake St. Peter near Bancroft and has been active in Canada’s highland games circuit for 20 years, competed in her first heavy events since both the sport and games across the country were put on hold amid the COVID-19 pandemic.

“I’m competing in stone throw, weight for distance, weight over bar, caber and the hammer throw. … It’s great to see everybody, but it’s hard to throw,” Boundy said of her return to heavy events.

The the break took a toll on her physically, she acknowledged, “plus I’m sick.”

“Not COVID sick,” she said,  “but I’ve struggled over the last year with chronic inflammation. I literally just rolled off the couch (to be here). This is sort of a test run. I just want to throw in every event.”

While Boundy was hoping to shake off the cobwebs in the Embro competition, she said the two women she was competing against are truly forces to be reckoned with.

“Celine Freeman-Gibb, I’d say she’s the best in Canada,” Boundy said. “She’s amazing. And the other girl, she’s new but her numbers are really good.”

Long dominated by men, Boundy tries to promote Scottish heavy events to women whenever she can.

“Two years before COVID, there was a large number of women throwing and then a lot retired,” she said. “Going into their 40s and their 50s, a lot of them just stopped throwing. So the numbers right now are pretty low in Ontario, but out west and down east, there’s more women that throw.”

For those women who may be interested in trying out Scottish heavy events, Boundy is encouraging them to check out the Canadian Scottish Athletic Federation website at www.csaf.ca to learn more.