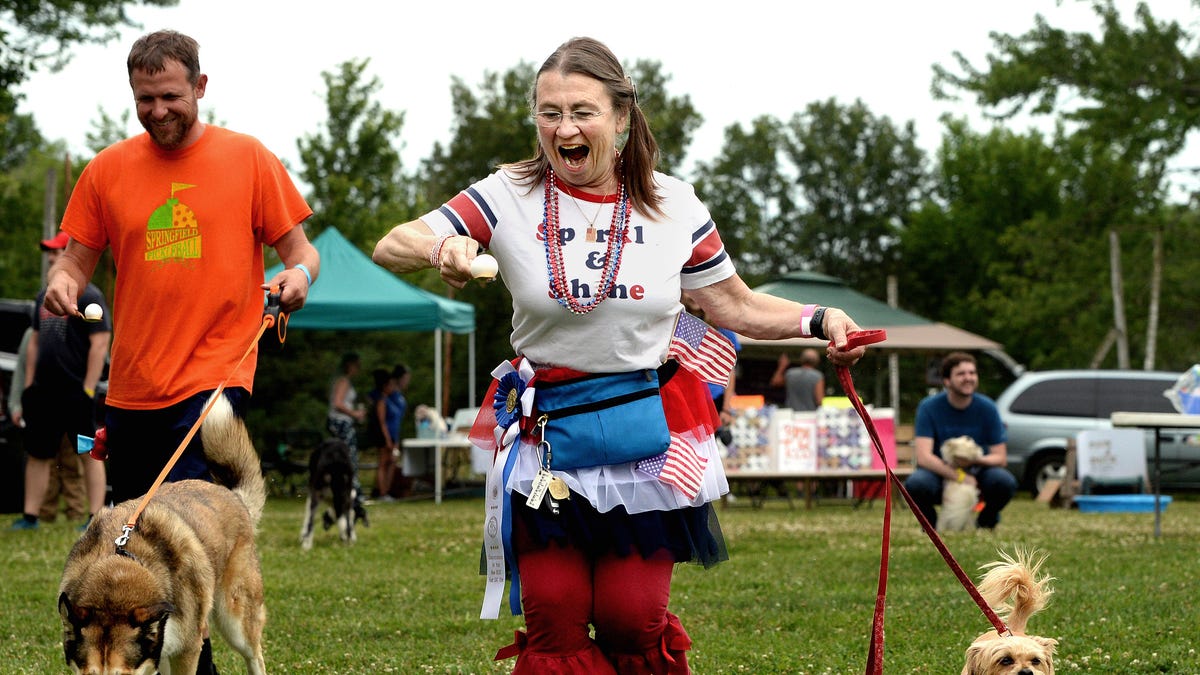 On Friday, fireworks rocked the docks on Lake Springfield. On Saturday, the docks went to the dogs.

A group of pet-oriented small businesses and non-profits teamed up for the inaugural Dogs at the Dock event at the Lake Springfield Prop Club. It was a chance for the organizations to promote themselves over the Fourth of July weekend while also helping find good homes for pets.

Event participants had the chance to adopt pets from the Animal Protective League, buy treats and accessories for their dogs (or cats), have a bite to eat or even ride down a bouncy slide. A showing of the original “One Hundred and One Dalmatians” on a big screen was scheduled for the end of the day.

The event was the brainchild of Kristen Hughes, the owner of Courteous Canines, a Chatham-based dog behavioral center. Her goal was to promote fellow non-profits that work with dogs, cats and other animals while ensuring that some of the pets would be adopted.

“We have been seeing a lot of dogs needing adoption, a lot more than usual,” Hughes said. “Euthanasia rates are higher, so we want to help make sure they all get adopted.”

Hughes and her friend/business partner, Macie Brown, planned the event. Brown is the president of Central Illinois Feline Rescue, a non-profit that helps provide homes for cats that would be euthanized at county pounds without the group’s help.

“I wanted to get my name out there so I could get my non-profit going,” Brown said. “We take in cats that are going to be euthanized from county pounds (and) owner surrenders. We’re foster-based, so we have homes all around Springfield, Virden and all around the area. We get them bedded and adopted.”

While the word dock is in the name and the Prop Club is on the lake, most of the booths and attractions weren’t on the dock for safety reasons.

“The more we thought about it, the more I was like, ‘I don’t want dogs and kids right next to the lake on Fourth of July weekend when everybody’s drinking,'” Hughes said. “I don’t think any of (my dogs) are qualified (to be rescue animals).”

However, the organizers found plenty of people willing to lend a hand for the event. One of those people was Becky Moore, the founder of Big Jake’s Dog Treats. Big Jake is Becky’s autistic son and the family started the business as a way to engage him in something that he likes to do after he graduated high school.

“After age 22, there’s not a lot of things for young adults with autism to do,” Moore said. “This is something he likes to do. Our family decided to help Jacob form his own business and do something that’s fulfilling to him.”

The treats are made without preservatives, giving people a healthy option to buy for their dog. The Moores came out in large part to showcase one aspect of what they referred to as the “canine community,” which included many of the people who organized Saturday’s event.

“We just want to showcase Jake’s products,” Moore said. “July is when we’re kicking off our business, so it’s (a) open house for Big Jake and we just want to introduce ourselves and bring some fun to the dog community.”

While the event brings awareness to many of the issues facing rescue groups and pet non-profits, the main goal for Hughes and Brown Saturday was to have fun and support those groups at the same time.

“That’s my main goal,” Hughes said. “I want everybody to have fun while doing something good. Whether this event is a success or utter failure, at least we tried.”