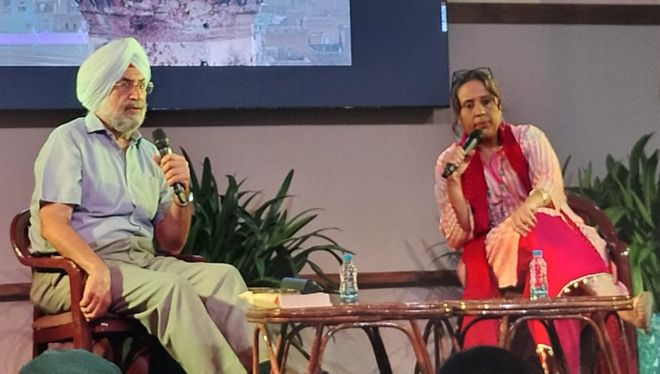 Holding a discussion on the events leading to and after Operation Bluestar in 1984, Majha House invited bureaucrat-turned-author Ramesh Inder and senior journalist Barkha Dutt for its ongoing series on 75 years of Independence.

Held at Punjab Naatshala, Preeti Gill, founder of Majha House, felicitated the guests and thanked them for accepting the invitation.

The events that happened in the aftermath of the 1984 turmoil, the atmosphere before the fateful day and after Operation Bluestar have had a long-lasting impact on the socio-political atmosphere of Punjab.

Ramesh Inder, who was the Deputy Commissioner of Amritsar when Operation Bluestar happened, had also served as the Chief Secretary, Punjab. He has written a tell-all book on the entire series of events that happened during the time, titled “Turmoil in Punjab: Before and after Operation Bluestar, An Insider’s Account”.

“The events were politically motivated, there is no doubt in that, but there were several other elements that added to the turmoil,” he opined. During the conversation, Ramesh Inder talked about how the military action in the Golden Temple was done without any special thinking and some alternate solution to resolve the situation was possible. He said this attack was reprehensible but the dignity of the holy place was first violated by the terrorists by taking arms.

During the course of conversation, Barkha Dutt was asked about the role of Pakistan in all this, she said that the money, weapons and training were given to the militants by Pakistan.

As the DC during the time, Ramesh Inder also discussed how he tried to exercise as much damage control in the aftermath of the military action. “I tried to get the shop owners, residents in the area surrounding Darbar Sahib to vacate the premises, but it was not successful, due to which many people lost their livelihood,” he said.

He termed the attack worse than the one on Jallianwala Bagh. Talking about newspapers and journalists, he said due to their efforts people had a major chunk of news, that is why the exact death toll could not be assessed. Many journalists lost their lives while covering the incident.

The second part of the programme was attended by Sarabjot Behl, Sandeep Singh, Rashmi Talwar, Narendra Sharma, Kulbir Singh and Rattijit from Preet Nagar. Sharing stories and eye-witness accounts of the time and heart-wrenching stories about the loss of lives and belongings gave an emotional ending to the entire session. Barkha Dutt also talked about her book “Humans of Covid”, which is based on her experiences collected on a road trip across the country, talking to people who were at the frontlines and understanding the plight of the masses as the raging pandemic claimed lots of lives.