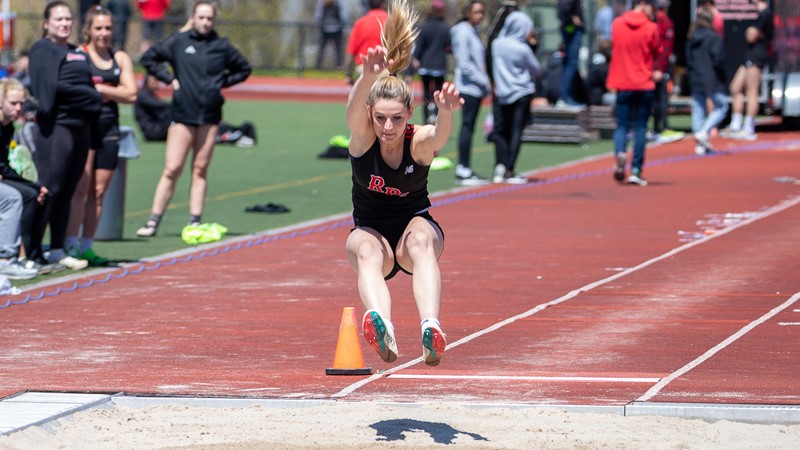 
POUGHKEEPSIE, N.Y. – Morgan Lee won the 1500 meters and the 5000 meters, Maya Verma captured the high jump and two others had second place finishes for the Rensselaer Polytechnic Institute (RPI) women’s track & field team, which placed third in the Liberty League Championship hosted by Vassar College. The University of Rochester won the team title with 230 points, followed by Ithaca College with 216 and the Engineers with 132.

Lee, a junior, ran the 1500 meters practically uncontested as she won with a time of 4:41.21, which was three minutes in front of the runner-up, Lindsay Scott of Ithaca, who crossed in 4:44.21. Jillian Lees, another Rensselaer junior, earned a fifth place finish with a time of 4:52.58.

Verma, a senior, led the field events with her victory in the high jump, reaching 1.63 meters on her first attempt at that height. The runner-up, Eileen Bequette of Rochester, managed a 1.58-meter effort, but could not match Verma in three attempts.

The triple jump featured two Engineers in the top 4 with Emily Vallee placing second at 10.92 meters and Julia Hubbard coming in fourth at 10.59. Rochester’s Alyssa Hoogs won with a leap of 11.27 meters.

Morgan Daley, who won the hammer on Friday, was second in the discus. She reached 37.35 on her fifth throw but could not out-do the 39.02 of St. Lawrence’s Kimberly Merchant.

And in the heptathlon, Maria Domingo was fifth overall with 3220 points.

A select number of team members will continue to compete in attempts to qualify for the NCAA Championship with the next opportunity coming on May 16 at Swarthmore.