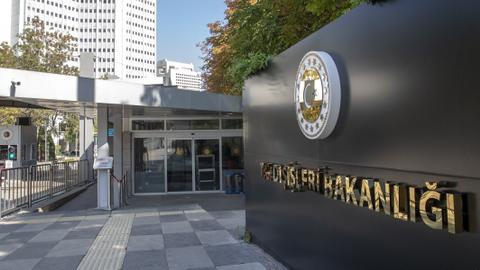 Türkiye has rejected and condemned statements made by United States’ President Joe Biden regarding the events of 1915.

“Statements that are incompatible with historical facts and international law regarding the events of 1915 are not valid,” said a Foreign Ministry statement on Sunday.

“This includes the unfortunate statement made by US President Biden today, which is the repetition of the mistake he had made in 2021,” it added.

Stressing that Ankara rejects “such statements and decisions, which distort historical facts with political motives,” the ministry also condemned “those who insist on this mistake.”

“One-sided and selective approaches that serve no purpose other than to draw enmity from history are morally problematic and politically ill-intentioned,” it noted.

– US President Joe Biden ignored historical facts, international law regarding events of 1915 and repeated same mistake he made in 2021
– We reject such statements and decisions, which distort historical facts with political motives

The ministry also asserted that commemorating “all sufferings experienced at that period, without ethnic or religious discrimination” requires a humanitarian and conscientious stance.

Türkiye respectfully commemorates the sufferings of the entire Ottoman population, including Armenians, it added.

“We reject the attempts to exploit this pain for political purposes.”

That includes the events of 1915, “without prejudice by respecting the scientific and legal principles in order to reach a just memory.”

“Türkiye strives for peace and stability in its region and in the world, and the spirit of cooperation to prevail,” the ministry said.

“The normalisation initiative with Armenia is another manifestation of this understanding.”