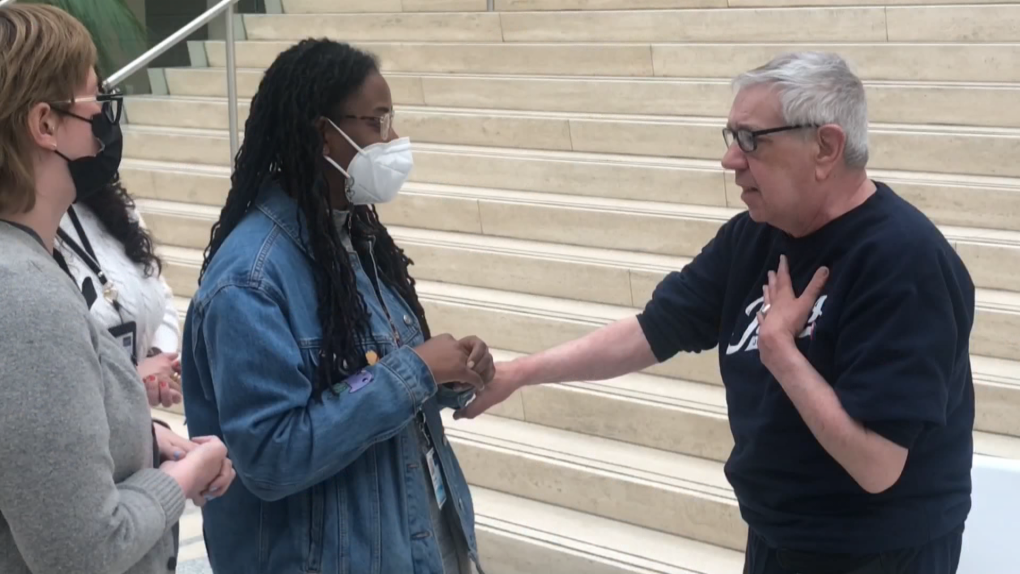 A man who pushed back against “bullying” while participating in the Stonewall Riots in the United States spoke about his experiences at Edmonton City Hall Wednesday.


“I did fight,” Martin Boyce told a crowd of a few dozen people.


The riots began on June 28, 1969 after police raided a New York City gay bar, an event that is considered a major catalyst for the LGBTQ2S+ liberation movement.


The raid sparked demonstrations and violence, but Boyce said many of the participants had simply had enough.


“Young people know the pain of bullying, a lot of victims, still,” he explained.


“This was codified. This was institutionalized. Bullying was the order of the day when you were a gay person, and you expected it from the day you were born until the day you die.”


Boyce said gay-rights effort are now more organzised and well-funded than ever before, and people like him will continue to fight back against descrimination.


The event was free and organized by the Pride Centre of Edmonton. Boyce is speaking in six Canadian cities, including three appearances in Edmonton. 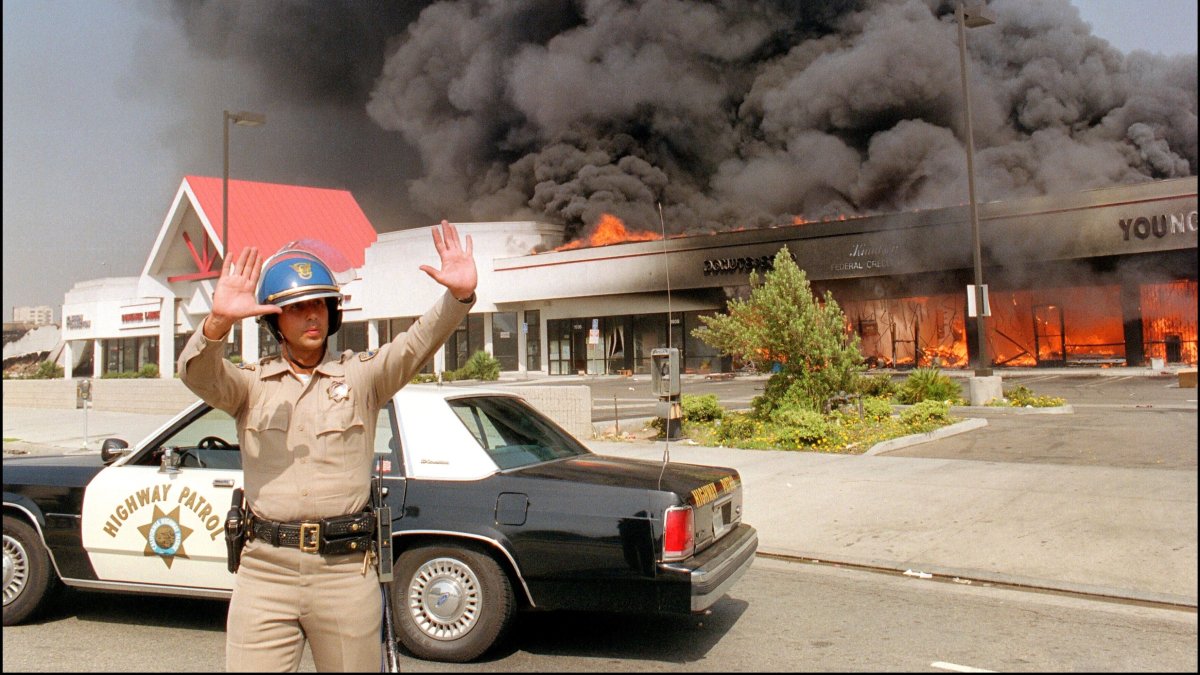 Thirty years ago this week, widespread violence erupted in Los Angeles in the aftermath of the acquittal of four white Los Angeles Police Department officers in the videotaped beating of Rodney King.

More than 60 people were killed and 2,300 were injured in days of fires, looting and violence that followed the verdict. Thousands of fires burned and property damage was estimated at $1 billion.

Below, a timeline of key events, starting with the moment in March 1991 that King was pulled over by authorities within view of the San Fernando Valley apartment of resident George Holliday and his new video camera.

Rodney King’s daughter has made it her life’s mission to celebrate her father’s legacy. Kathy Vara reported on NBC4 News on Wednesday, March 3, 2021.

Before the Rodney King Verdict

March 3, 1991: California Highway Patrol officers pull over Rodney King for speeding on a Los Angeles freeway. King, who was on probation for a robbery conviction, exited the freeway and stopped in front of an apartment building in the San Fernando Valley community of Lake View Terrace. Los Angeles Police Department officers took over the traffic stop — plumber and apartment resident George Holliday, awakened by the noise, used a recently purchased video camera to capture what happened next. His videotape shows four white police officers beating King, including after he was on the ground. Holliday gave the videotape to a TV station.

“I didn’t really understand what was going on,” Holliday told NBC in 2016. “I was just wondering what had happened. What had led up to this?”

Archive Video: This video was originally broadcast on March 3, 2016. George Holliday reflects on the night he recorded LAPD officers confront driver Rodney King in front of Holliday’s Lake View Terrace apartment in northeast LA. Editor’s Note: This video was originally published March 3, 2016, 25 years after the Rodney King beating was brought into the national view by the home video. Patrick Healy reports for the NBC4 News at 5 and 6 p.m. on March 3, 2016.

March 16, 1991: Fifteen-year-old Latasha Harlins is shot in he back of the head by a Korean shop owner. The Black teen had placed a bottle of orange juice in her backpack inside the store and approached the counter with cash. Shopkeeper Soon Ja Du accused Harlins of trying to steal the juice before a scuffle broke out between the two. As Harlins walked away, the shopkeeper opened fire in a killing captured on store security camera video.

Nov. 15, 1991: Shopkeeper Soon Ja Du is convicted of voluntary manslaughter for the killing of Latasha Harlins. She could have been sentenced to 16 years in prison, but the judge placed her on probation. The light sentence for the Black teen’s shooting death came a week before a Los Angeles County court case involving cruelty to a dog ended with a tougher 30-day jail sentence.

Nov. 26, 1991: In a key legal development, the officers’ trial is moved to Simi Valley northwest of Los Angeles. A court determined the case’s publicity and highly charged political environment it created might not allow for a fair trial in Los Angeles.

After the Rodney King Verdict

April 29, 1992: The jury acquits the four officers after seven days of deliberations on almost all charges. Jurors deadlocked on one assault count against Powell.

“The jury’s verdict will never blind the world to what we saw on the videotape,” Bradley says.

April 29, 1992: News of the jury’s decision spreads, unrest follows. The first reports of burning and looting stores come soon after the verdict is announced. Mayor Bradley’s request to send in the National Guard is granted by Gov. Pete Wilson.

The violence includes the attack on trucker Reginald Denny, who was pulled from his cab and Florence and Normandie avenues and beaten.

April 30, 1992: Looting and fires are reported across LA County. Some business owners form armed community teams in the absence of a police presence. A dusk-to-dawn curfew is imposed in large portions of the city of Los Angeles and the surrounding county.

May 1, 1992: In an emotional plea for an end to the violence, King stands before TV cameras and asks, “Can we all get along?”

May 3, 1992: A citywide curfew is lifted. Bradley announces the crisis is over.

May 4, 1992: Violence and crime breaks out sporadically. Schools, banks, and businesses reopen.

Aug. 5, 1992: Three months after their acquittals in the criminal case, LAPD Sgt. Koon and Officers Powell, Briseno and Wind are indicted on federal charges of violating King’s civil rights.

Dec. 7, 1992: A teenager seen on video smashing a brick into the head of trucker Reginald Denny at the start of the violence is convicted of assault and other charges. Damian “Football” Williams is sentenced to 10 years in prison.

In one of his few interviews, Denny told NBCLA in 2002 that he understands he was targeted because he is white, but said focusing on race in thinking about the riots is foolish and shortsighted. At the time of the interview, Denny had long since forgiven the men who assaulted him and expressed gratitude for residents who came to his aid, risking their own lives in saving his.

“People seem to forget it was black folks that saved my life,” Denny said. “On one hand, there were some out there to try to kill me or do me in. On the other hand, they are trying to save me because I’m not the enemy, and believe me I am not the enemy.”

April 17, 1993: Koon and Powell are convicted of violating King’s civil rights. Briseno and Wind are acquitted.

Aug 3, 1994: The city of Los Angeles agrees to pay King $3.8 million for medical bills, pain and suffering due to the beating.

June 17, 2012: King drowns in his backyard swimming pool at age 47. His death was just weeks after the 20th anniversary of the riots and soon after the release of his memoir “The Riot Within: My Journey from Rebellion to Redemption.”

Sept. 19, 2021: George Holliday, whose videotape brought the King beating to public light, dies due to complications from COVID-19. He was 61.

Holliday told the New York Times a year earlier that he was still working as a plumber and never profited from the video. He said he had purchased the camera he used to record the King beating about a month earlier and he grabbed it instinctively when he was awakened by the traffic stop.

“You know how it is when you have a new piece of technology,” he told the Times. “You film anything and everything.”