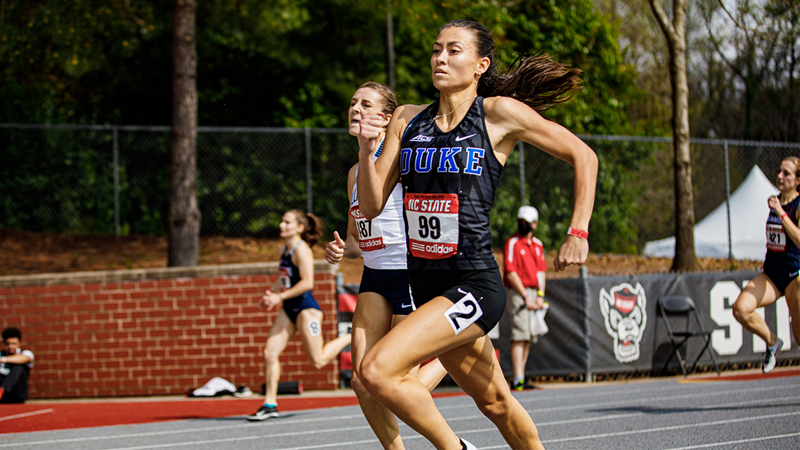 
HIGH POINT, N.C. – Graduate student Lauren Hoffman delivered a stellar performance en route to establishing a new facility record in the 400m hurdles, while the Blue Devils produced strong performances across the board and secured first-place finishes in six other events Saturday afternoon on the final day of the Bob Davidson Invitational.

In arguably her strongest individual event, Hoffman commanded the 14-member field as she clocked 56.53 seconds to claim the top spot and shatter the seven-year-old Vert Stadium record set by Joanna Currie. Hoffman finished three seconds faster than the event’s runner-up, while registering a new personal best and lowering her school-record time in the process.

Halle Bieber got her spring campaign off to a strong start behind a strong display of running as she won both the 100- and 200-meter dashes. The junior registered personal best times in both events – 11.47 seconds (100m) and 23.58 seconds (200m) – slotting herself fifth all-time at Duke in the 200m in the process.

Graduate student Zoe Hughes took the track for the first time this season and tallied a pair of top-five finishes in the women’s long jump and 100m hurdles. Hughes finished first in the long jump – flying out to a wind-assisted leap of 6.04m (19-9.75 feet) on her final jump to edge High Point’s Alicia Dawson by a centimeter and claim the win. She also performed well in the took fourth in the hurdles with a wind assisted 13.93 second finish.

The women’s 4x100m relay of juniors Maya Provencal, Carly King and Jenna Crean and senior Nikki Merritt set the tone for the day in the first event of the morning, racing to a first-place finish behind a run of 46.60 seconds. Freshman Megan McGinnis opened her outdoor season with a bang and collected her first event win of the spring after clocking 2:14.64 in the 800m run, while junior Beau Allen cleared a height of 2.00m (6-6.75 feet) to place first in the men’s high jump.

Sophomore Job Trahan was the first Blue Devil to take on the windy conditions in the track events. Trahan delivered a strong performance to open the outdoor season as he ran 48.61 seconds to place third overall, just 0.2 seconds off his personal best.

Duke performed well as a whole in the sprints – first in the 100m dash, then in the 200m. On the women’s side, strong, slightly wind-aided sprints from Provencal and freshman Abby Geiser led to top-three finishes. Provencal registered a personal-best time of 11.68 seconds to place second, while Geiser took third (11.76) in her outdoor debut. Sophomore Hailey Williams (11.85) also had a solid run as she just missed out on the top-five by a thousandth of a second and Crean ran 11.90 seconds in her collegiate 100m debut.

Domination carried over to the 200m event as the Duke women registered six of the top seven times in the field. Senior Kelcie Simmons (23.97 seconds) and Crean (23.98 seconds) finished in second and third, with Crean’s time representing a PR. King, Geiser and Williams also finished back-to-back-to-back as the trio checked in at fourth (24.40 seconds), fifth (24.40 seconds) and sixth (24.41 seconds), respectively.

On the men’s side of the 200m dash, three of the four individuals recorded personal bests. Graduate student Miles Mingo led the way with a 21.22 second finish,  junior Ezra Mellinger improved his No. 3 all-time program mark via his run of 21.25 seconds, while classmate Joseph Laster (21.70 seconds) and Trahan (21.83 seconds) also posted their fastest event times. In another windy race, this time the 100m, the Blue Devils took advantage and ran well, led by Mellinger who placed third on a 10.35 run.

The Blue Devils will split up the team as they get set to compete in the Raleigh (March 25-26) and Texas (March 24) Relays. Duke will send a group of student-athletes up the road to Raleigh, N.C., while other members of the team will head to Austin, Texas.