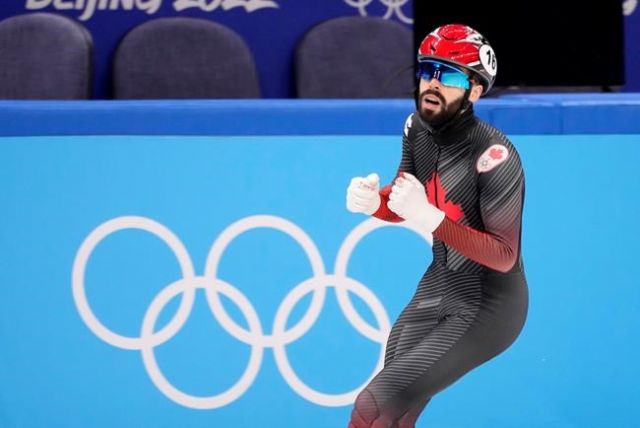 Had Steven Dubois been told two weeks ago that he’d be a double Olympic medallist at his first Games, he would have never believed it.

Dubois, 24, captured his second short-track speedskating medal of the Beijing Olympics on Sunday, with a bronze medal in the men’s 500-metre final.

The 24-year-old from Terrebonne, Que., flashed a grin and a thumbs-up as he stepped on the podium after finishing third behind Shaoang Liu of Hungary and Konstantin Ivliev of Russia.

It was the second medal for the first-time Olympian, who won silver in the 1,500-metre event last week.

He came into the Olympics with a lower profile than some of his more veteran short-track teammates but has emerged a star, surprising even himself.

“I had never really proven myself in the big events,” he said. “I won individual medals at the World Cup, but I went to the world championships twice and only had a fourth place in the 500 metres.”

Dubois was advanced to the A final after the judges determined he’d been bumped by South Korea’s Hwang Daeheon in his semifinal heat.

In the final, he settled into third place early and defended his position to the end.

Sébastien Cros, the head coach of the Canadian team, noted that Dubois appeared serene in the last few days. Dubois admitted that the silver medal he won in the 1,500-metre event had taken some of the pressure off his shoulders.

“I was stressed to do well in the 500 metres, but the pressure of coming home with a medal was gone,” he said. “I think I was more lucid.”

Before the final, Dubois said he went through his recovery and sharpened his skates. Then he sat in his chair, waiting.

“I was physically and mentally fit,” he said. “I knew what I wanted to do. It was clear.

“The pressure was less strong. I did exactly what I wanted to do and it gave me a third place.”

Dubois said he was in a little bit of shock after his 1,500-metre medal. This time, he felt more relief.

“It’s the distance I concentrated on during training,” he said of the 500 metres. “To know I’ve finally proved that I have my place among the best at this distance, that I’ve succeeded in shining at this distance in a major competition, it’s a relief. I’m looking forward to reuniting with my teammates to celebrate.”

Fellow Canadian Jordan Pierre-Gilles was eliminated earlier after falling in the quarterfinals.

While there have been some successes, it’s been a difficult Olympics for Canada’s speedskaters thus far. Boutin’s bronze in the women’s 500 metres is the only other medal won so far.

She and Sarault will get a chance to finish on a high note in the final of the women’s 1,500 metres on Wednesday. Danaé Blais will also skate.

“For the moment, we have six finals and three medals. The girls have potential in the 1,500 metres. We want to maximize the chances we have, even if it’s difficult,” Cros said.

He said that while he’s satisfied for now, the Canadians remain hungry for more.

“For me, each time we’re in a final, it’s to win a medal,” he said, pointing out that there are more events to come.

“For the girls, tonight, it’s a disappointment, it’s normal,” he added. “We’ll let this pass, then we’ll prepare for the final day.”

This report by The Canadian Press was first published Feb. 13, 2022.