CHICAGO, Ill.—Villanova tallied team points in all five events that were scored on Friday and is currently in third place in the team standings after one day of competition at the 2022 BIG EAST Track & Field Championships Presented by JEEP. Nearly two years since the last indoor BIG EAST meet the Wildcats recorded strong performances in the 5000 meters and the distance medley relay on the track as well as in the weight throw, long jump and pole vault inside the Track & Field Complex at Gately Park in Chicago.

The highlight of the day for Villanova was awards podium finishes for junior Haftu Strintzos (Melbourne, Australia) in the 5000 meters and graduate Michael Troup (Doylestown, Pa.) in the long jump. Senior pole vaulter Jim Keys (Herndon, Va.) and graduate thrower Riley LaRiviere (Telford, Pa.) came in fifth in their respective events, while the distance medley relay squad notched another fifth place finish in the final event of the afternoon.

Strintzos raced in the 5000 meters which was the only individual track event to be scored during Friday’s action. He came in third to earn a bronze medal and senior Josh Phillips (Belrose, Australia) added a sixth place finish to give the Wildcats two scorers in the event. It was a grueling race in which each of the top four finishers eclipsed the previous BIG EAST meet record of 13:51.23 set in 2018.

This is the second time that Strintzos has medaled in the 5000 meters at the indoor BIG EAST Championships, as he also came in third two years ago at the SPIRE Institute in Geneva, Ohio. His time on Friday was nearly 30 seconds faster than the one he posted in 2020 and he crossed the finish line in 13:48.72 to also come within less than 1.5 seconds of his lifetime best mark set during the 2021 outdoor campaign. Phillips finished sixth overall in 14:12.19 and is also a two-time BIG EAST scorer in the 5K; he placed seventh at the outdoor conference championships last Spring.

Villanova wrapped up competition on the first day of the meet with a lineup of graduate Nick Steele (Harvard, Mass.), sophomore Nicholas Mollica (Jackson, N.J.), junior Miller Anderson (West Hartford, Conn.) and redshirt freshman Jack Jennings (Mendham, N.J.) running in the distance medley relay. They combined for a time of 9:56.46 and a fifth place finish in the race, with Jennings closing strong with a 4:10.63 anchor leg for the final 1600 meter. Steele led off the relay with a split of 3:04.11 over 1200 meters followed by Mollica (49.75) and Anderson (1:52.00) on the 400 and 800 meter legs, respectively.

Troup surpassed seven meters in the long jump for the first time this season to return to the awards podium. He matched his third place finish from the 2020 indoor BIG EAST meet and is now an eight-time individual scorer at the conference championships during his career. Troup also recorded a time of 7.14 in the preliminary heats of the 60 meters on Friday and had the fastest time that did not advance to the final.

The first field event to get underway on Friday was the pole vault and Keys finished fifth after clearing the bar at a height of 4.60 meters. He started the day with a successful clearance at the opening height of 4.45 meters on his first try, then made it over the bar at 4.60 meters on his second attempt. There were five competitors left in the competition when the bar was raised to 4.75 meters and Keys missed on his three attempts at that height.

One of the newest Wildcats had a successful BIG EAST debut as LaRiviere finished fifth in the weight throw. A midseason graduate transfer from Lehigh, LaRiviere recorded top mark of 16.64 meters on the day. He was a steady performer, with his first attempt of the meet going for 16.10 meters to put him into fifth place and secure a spot he would hold for the duration of the competition. LaRiviere was one of nine athletes who advanced from the initial round of three throws to take three more attempts, and he posted the mark of 16.54 meters on his fourth throw.

Villanova qualified a total of five athletes for the final in the Mile and the 800 meters after those events had preliminary heats on Friday afternoon. Sophomore Sean Dolan (Pennington, N.J.) had the fastest qualifying time in the 800 meters after he won his heat in 1:50.79 to automatically move on to Saturday’s final; the top time in the second of two heats was a nearly identical 1:50.80. Dolan leads the BIG EAST this season with a time of 1:48.11 in the 800 meters.

The quartet of senior Charlie O’Donovan (Cork, Ireland), redshirt freshman Liam Murphy (Millstone, N.J.), senior Patrick Spychalski (Mount Pleasant, S.C.) and Steele will represent the Wildcats in the final of the Mile. O’Donovan and Murphy raced in the first of two preliminary heats and secured automatic qualifying spots in the final with times of 4:21.75 and 4:21.85, respectively. They finished second and third in their heat, while Spychalski and Steele advanced on time out of the second heat with respective times of 4:17.82 and 4:18.51. 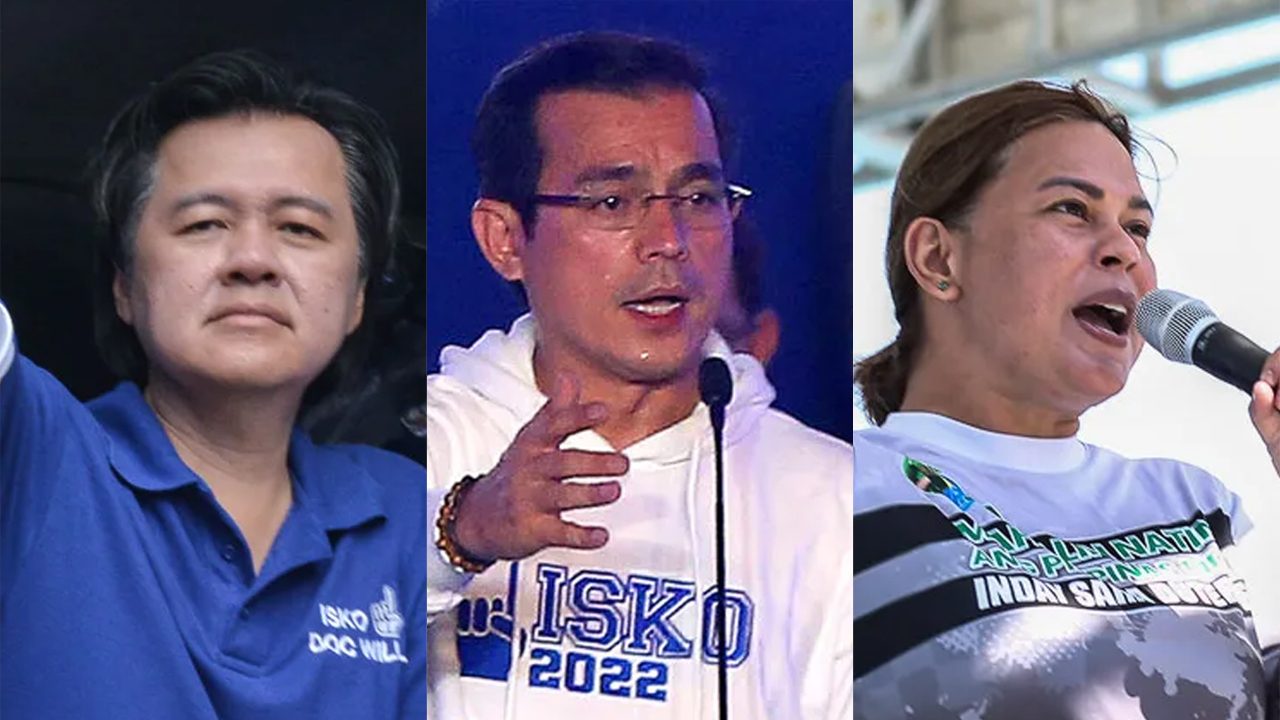 MANILA, Philippines – There was no sign of Isko Moreno’s running mate doctor Willie Ong in the Manila Mayor’s first sojourn into Mindanao where supporters of the tandem Isko-Sara (ISSA) showed up in full force.

From February 20 to 21, the dates Moreno spent in Maguindanao, Ong was noticeably absent. It quickly became apparent why. In Moreno’s first event in the vote-rich Bangsamoro province, large banners of “Team ISSA Movement” were prominently displayed in the venue.

Lito Banayo, Moreno’s campaign manager, said it was he who had asked the internist-turned-politician to sit out campaign sorties in the Bangsamoro Autonomous Region in Muslim Mindanao (BARMM) because of the intense support for Sara Duterte there.

“I called up Doc Willie on Saturday and I said maybe it might be better [to skip] because it’s too partisan for Sara… It might become embarrassing,” Banayo told Rappler on Monday, February 21, in a phone call.

“He said, ‘Walang problema‘ (No problem). I told him we can focus on his visits to Christian Mindanao,” added Banayo.

Moreno’s Maguindanao events were dominated by politicians who are openly supporting the President’s daughter for vice president but are loathe to back her standard-bearer Ferdinand Marcos Jr.

Chief of these were Maguindanao 2nd District Representative Toto Mangudadatu and his brother, Dong Mangudadatu. Their side of the powerful clan rolled out the red carpet for Moreno, welcoming him at the airport, accompanying him on motorcades around the province and in Cotabato City, ensuring the attendance of tens of thousands to a rally where the Manila chief spoke.

Meanwhile, Aksyon Demokratiko, party of both Moreno and Ong, said it “respects” the decision of political personalities from around the country to pair the Manila mayor with another vice-presidential candidate.

“Mayor Isko and Aksyon Demokratiko welcome such endorsements of support. Having said that though, both Mayor Isko and the party will continue to have Doc Willie Ong as our only vice-presidential candidate,” party chairman Ernest Ramel told Rappler.

The party, he added, “openly discusses” such pair-ups with each other and “are all up for it with open minds and hearts.”

When Moreno is asked about his supporters who want to pair him up with Sara, he thanks them for their support but appeals to voters not to “separate” him from Ong. It was the Manila mayor who asked the doctor and online personality to forego a Senate bid and be his running mate instead.

Support for “Isko-Sara” is not limited to Mindanao. Last February 18, a group of Cebu politicians and personalities declared support for that tandem. The group calls itself Visayas for Isko-Sara Alliance (VISA). They said they pledged their support for Moreno and Duterte because of their performance as mayors.

Splitting up official tandems and putting two candidates from different parties under one tandem is an age-old practice of Filipino voters. In 2016, there was also a movement within Duterte supporters that campaigned for DuBong or a Duterte-Bongbong Marcos tandem.

In post-EDSA Revolution history, only one official tandem was elected together – that of Gloria Macapagal-Arroyo and Noli de Castro in the 2004 elections. – Rappler.com