Winnipeggers gathered at the St. Norbert Arts Centre on Monday to mark the creation of legislation that abolished slavery in Canada 188 years ago, and reflect on the ongoing hardships Black people face.

Co-host Uche Nwankwo said the anniversary is an opportunity to discuss Black history and discuss the work that needs to happen to end the ongoing effects of slavery.

“History is important. It’s a way of remembering what had happened and then finding a way to prevent a future occurrence of such ugly history,” he said on Monday.

In addition to addressing ongoing anti-Black racism in Canada, Nwankwo said the local Emancipation Day programming also looked at the similar treatment of Indigenous peoples in Canada. The event included speeches from community advocates and politicians, and finished with a sacred fire outside the arts centre.

“We’re still feeling the impacts because racism is still alive and well in both the United States and in Canada. If we just put it on the back burner, it will never, ever go away.” he said.

Reaves said he hopes marking the anniversary of Emancipation Day will encourage people to put aside their differences and engage in more respect for one another.

“It’s for people to remember a very dark, dark time … it’s a stark reminder of just how cruel human beings can actually be. And this will be a stepping stones to make sure that we never repeat history again, especially as hideous as slavery is.”

Traditional knowledge keeper Michael Pierre sits on the board of directors for the St. Norbert Art Centre. He held a sacred fire at the end of the event and said the arts centre has been recognized as a sacred site by many traditional people.

Pierre said marking the anniversary of Emancipation Day was also important to the Indigenous community.

“Recognizing that as an Indigenous person and seeing my relatives in the Black community … We have a shared history and common experiences,” he said. “But again, all of us as human beings are impacted by all of these types of injustices that we do toward each other.”

Pierre said he was pleased to see many young people at the event, as well as community and political leaders who recognized the importance of recognizing Emancipation Day.

“This is a day to acknowledge and say thank you for all the sacrifices that our ancestors have been through. The strength that they had to keep going,” he said.

It’s the first year that Manitoba has officially recognized Emancipation Day, which marks the day the Slavery Abolition Act took effect in the British Empire (including Canada) in 1834. Two years ago, Ottawa named Aug. 1 as Emancipation Day, but the province didn’t officially adopt the legislation to name it a holiday until October of that year.

Around 30 people attended the event Monday. 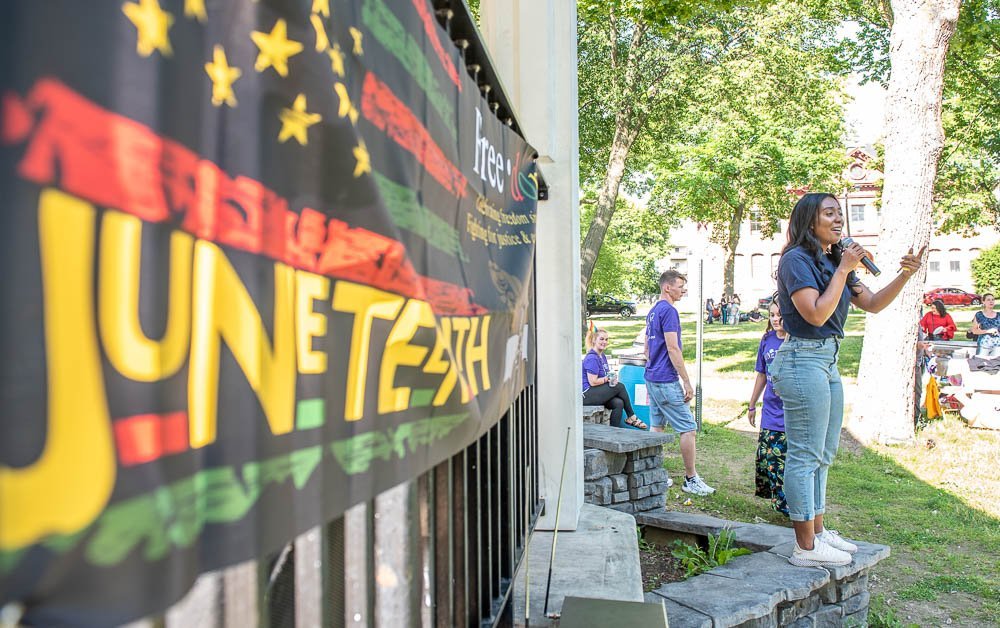 Sunday is Juneteenth National Independence Day, which became a national and state holiday in 2021.

Juneteenth commemorates the date, June 19, 1865, when Union Gen. Gordon Granger rode into Galveston, Texas, and read General Order No. 3 to some of the last people still living in bondage in the United States.

South Portland raised a Juneteenth flag, designed by Ben Haith in 1997, on Friday in front of City Hall. It is a red, white and blue flag with a star in the center. The colors are a purposeful choice by the designer – a reminder that enslaved people and their descendants are Americans, and all Americans have a common bond of freedom. Michele McDonald/Staff Photographer

“All slaves are free,” the order declared, prompting a celebration that has been repeated annually in many Black communities for more than a century.

The news came nearly two months after Brevet Major General Joshua Chamberlain of Maine oversaw the surrender of the Confederate infantry at Appomattox, and more than two years after President Abraham Lincoln signed the Emancipation Proclamation.

Government offices, banks and some businesses will be closed on Monday to mark the official holiday, also known as Freedom Day, Jubilee Day, Emancipation Day and Black Independence Day.

Here are some Juneteenth events scheduled on Sunday:

• “What Does Juneteenth Mean?” a celebration showcasing music, art and culture by the Brunswick School District, 11 a.m. to 2 p.m., Lower Mall, Brunswick.