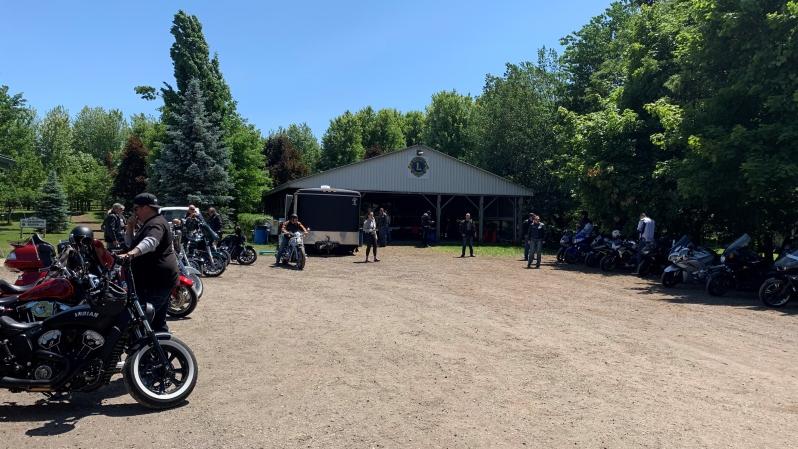 A group of motorcycles made their way from Oakville to Breslau on Saturday to raise money for guide dogs through the Lions Foundation of Canada.

The foundation provides dogs for people with medical and physical disabilities to help empower them to a life of independence.

The Ride for Dog Guides event is a way to raise money for the foundation in order to pay for the $35,000 price tag that comes with raising and training of dog guides.

“We rely on donors and fundraising events like the Ride for Dog Guides to help us reach those goals and achieve our mission,” said Andrea Stevens, the manager of events for the foundation.

Due to the pandemic, the event was virtual for two years. Organizers weren’t sure what to expect for the turnout this time, but said the 80 riders that signed up this year was more than in 2019.

One of the ride participants and lead fundraisers from the event, Robert Stanley, said he has seen the impact dog guides have had on people’s lives.

“I’ve just been very fortunate to see that and once you do it, you want to get involved,” said Stanley. “I love motorcycling, so of course I’m going to want to ride, but seeing that the money is going to such an important cause, that’s got me.”

Stanley has raised over $80,000 through donations for the foundation since he started participating in 2016. A dog guide was named after Stanley to recognize his contributions to the foundation.

Alex, an 11-year-old boy living with autism, now has the dog. Stanley said he has seen how the dog guide has made an impact in Alex’s life.

“They’ve given the honour of showing me the changes in Alex over those two to three years that he’s had Stanley and he’s a different boy,” said Stanley.

According to Alex, his canine companion Stanley has been a big help.

“Since my dog has been at school, I’ve gotten a lot more help,” said Alex. “Every time I am going bed, he helps me usually before I go to bed, because I’m usually afraid of the dark sometimes.

“He helps me get through tough times.”

Stevens said the pandemic has hindered how many dogs are available, but this year they are hoping to provide at least 150 dog guides to people like Alex.