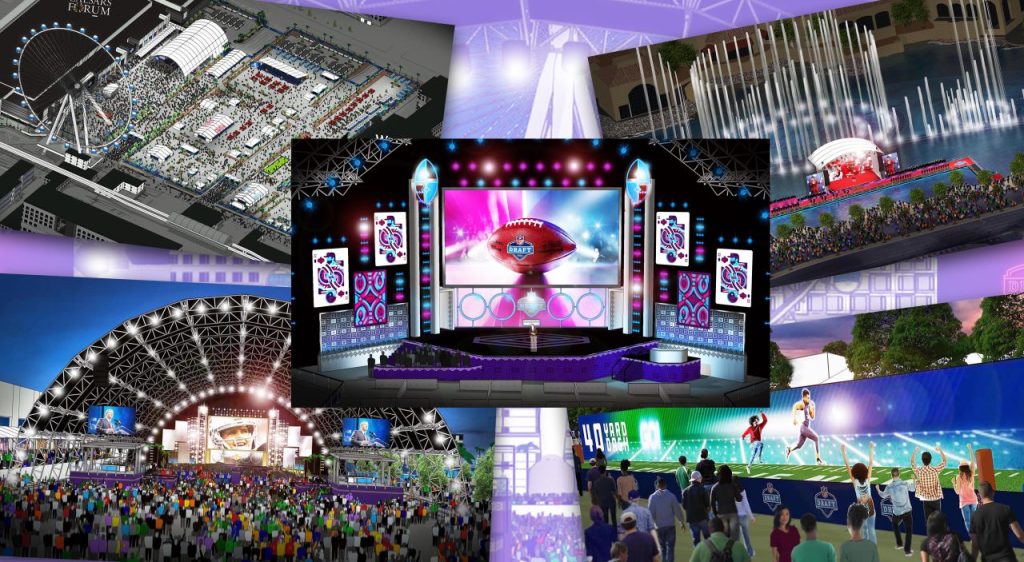 Tracie Rodburg remembers looking out at the masses attending the 2019 NFL Draft in Nashville. The NFL’s SVP for sponsor management, Rodburg stood alongside her counterparts from Caesars Entertainment, who were at the time preparing to host the 2020 draft.

Nashville boasted over 600,000 attendees across three days, reporting over $132 million in direct spending—more than Dallas and Philadelphia had managed over the previous two years, combined. Putting on the most viewed NFL Draft to that point, Music City would be a tough act to follow.

But Las Vegas is not a town that often finds itself outdone, as the Caesars representatives made clear. “They were looking out on the crowd and saying, ‘Oh, we got this,’” Rodburg said.

Three years later, it’s finally Vegas’ turn to put on a show. While COVID-19 diverted the NFL Draft’s decades-long march from hotel conference room event to multi-day football festival, as many as 1 million attendees are expected this week. Rob Gronkowski will be one of them.

On Friday, Gronkowksi will host Gronk Beach at the Encore Beach Club. Gronk held a similar event before the 2020 Super Bowl in Miami. He and organizers at Medium Rare believe there is a large market of football fans looking for extra entertainment around the draft.

“Our partners were very receptive to the thought that draft weekend has a lot of opportunity for events,” Medium Rare co-founder Joe Silberzweig said. “[The NFL is] doing a good job with some of the free events and things going on around the strip, but I’m not sure that it’s enough, especially from an entertainment perspective.” Gronk Beach’s sponsors include Pepsi and 1800 Tequila.

If this level of festivity had surrounded his 2010 draft day, Gronkowski said, “I probably wouldn’t have even played a single down in the NFL.”

Medium Rare is planning for a different crowd than the ones it entertains at Super Bowls, charging $75 for tickets this week rather than upwards of $400.

Elsewhere on the strip, there will be plenty of opportunities for celebrity sightings. Rich Paul has reportedly booked Tao Nightclub for a Klutch Sports Group event, and Tao Group co-CEO Jason Strauss told the Las Vegas Review-Journal that VIP service demand has been so high the company is struggling to source the high-end tables needed to host them. “In 16 years in this business, I have never had that concern,” he said. Weezer, Ice Cube, and Marshmello, meanwhile, are among the musical performers the NFL has lined up.

The draft’s April date has contributed to its growth. “Q1 is just atrociously packed,” Wasserman president, brands and properties Elizabeth Lindsey said, citing everything from the Daytona 500 to the Oscars. “I think [the Draft] actually happens in a good part of the calendar.”

A mid-spring slot also opens up more location possibilities. Each time the draft visits a new town, Lindsey said there’s a bump in interest among brands looking to reach different markets. After Vegas, the NFL will head to Kansas City in 2023 and Detroit in 2024.

This will be the first NFL Draft to take place in the Pacific time zone, meaning that the actual business of selecting players will be over in time for locals to enjoy themselves in the evening, while the NFL proves that its fans will use just about any excuse to celebrate.

“That’s what Vegas is—it’s a show,” Rodburg said. “And the draft will fit perfectly in that.”