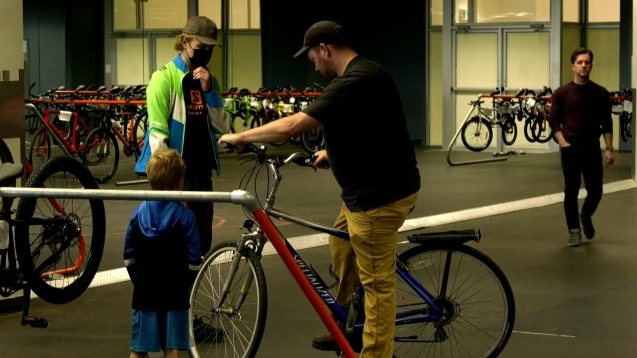 Calgarians wanting to cycle through used bikes took to Sunridge Mall this weekend to change their wheels.


The Calgary Bike Swap, organized by Alberta Bike Swap, is a springtime event that aims to provide a safe space to buy, sell or donate a bike.


“We welcome people to bring in their used bikes, we tech check them, to make sure it is a good used bike,” said Chris Grant, co-founder of Alberta Bike Swap. “That is our primary goal, is to make a sale of a safe bike.”


On Saturday, those looking to sell their bikes were able to drop them off, and if they were sold on Sunday, a cheque will be mailed out after, minus a 15 per cent commission.


“The numbers of bikes for sale are down from previous years, but looking at the sale rate, I think we’re between 85 and 95 per cent,” said Grant.


The event began in 2011 after Grant and his wife Laura after some troubling experiences with buying and selling items online.


“We thought there must be a better way to do this,” he said.


Grant said there were times when sellers had misleading advertisements or they didn’t feel safe with potential buyers.


“The time I was selling a bike, (I said to the buyer) ‘Buddy, the bike is here. You’re supposed to be looking at the bike, not checking everything else out in my space, in my garage,'” said Grant. “And it was around that time we were robbed of bikes.”


Alberta Bike Swap says unlawfully obtained goods have no place at their event.


“We tech check it, we record the serial number,” Grant said. “We found that to be quite effective in keeping stolen goods away.”


For residents who participate in online buying and selling, Calgary Police say there are ways to make transactions safer, including meeting in a public place with people around, like one of their offices, bringing someone with you, using cash, and not giving out personal information.


The Grants had put the brakes on the annual event for the past two years due to the pandemic and are optimistic about the return.


Lethbridge held its bike swap on April 30, but Edmonton will be hosting its next weekend.