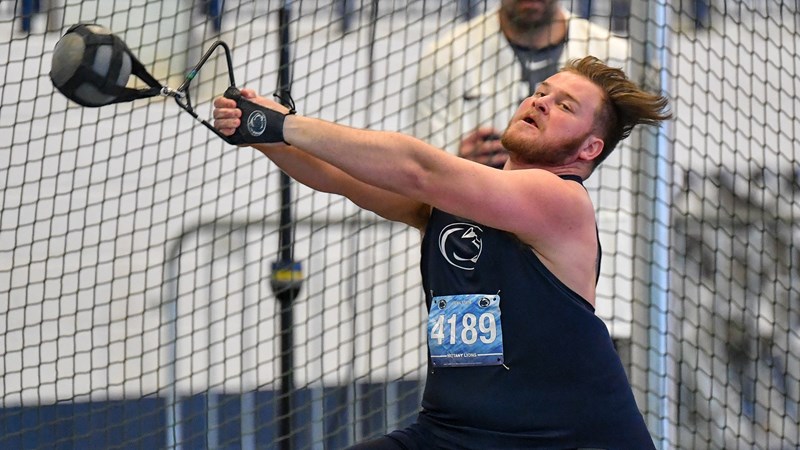 Indoor Big Ten runner-up Katie Jones kicked the day off in Orlando with a first-place finish in women’s pole vault, clearing a height of 4.00m. The win began a dominant string of field events for Penn State that saw Tyler Merkley come out on top of a Nittany Lions men’s discus sweep, with a throw of 52.11m. Senior Thomas Bojalad and sophomore Duane Knisely rounded out the sweep with throws of 51.13m and 48.23m, respectively. The duo followed up by also placing second and third, respectively, in men’s shot put, with marks of 16.69m and 16.24m.

Strong performances by the men’s throwers continued after first-year Collin Burkhart spearheaded another Nittany Lion sweep, winning the men’s javelin with a new personal best throw of 68.19m. Kevin Bartosh followed in second with a throw of 65.06m, and Tristan Schmidt completed the sweep with a distance of 61.48m. On the women’s side, the duo of Madison Smith (44.37m) and Ryann Brundage (40.79m) placed second and third in strong showings.

Mid-Atlantic Region Field Athlete of the Year Mallory Kauffman saw two top-3 finishes on the day, as she placed third in women’s discus with a toss of 45.58m before finishing second in women’s shot put with a throw of 16.82m.

In their outdoor debuts, Korbin Martino finished fourth in the men’s 200 with a personal best time of 21.45, and Allen Taylor finished second in the men’s 400m hurdles with a 54.92.

In the Raleigh Relays, Madaline Ullom ran the ninth-fastest women’s 1500m in program history with a time of 4:20.27. Makenna Krebs achieved a new personal best time of 4:29.01. Senior Connor McMenamin led Penn State in the men’s 3000m steeplechase with a time of 9:03.26.