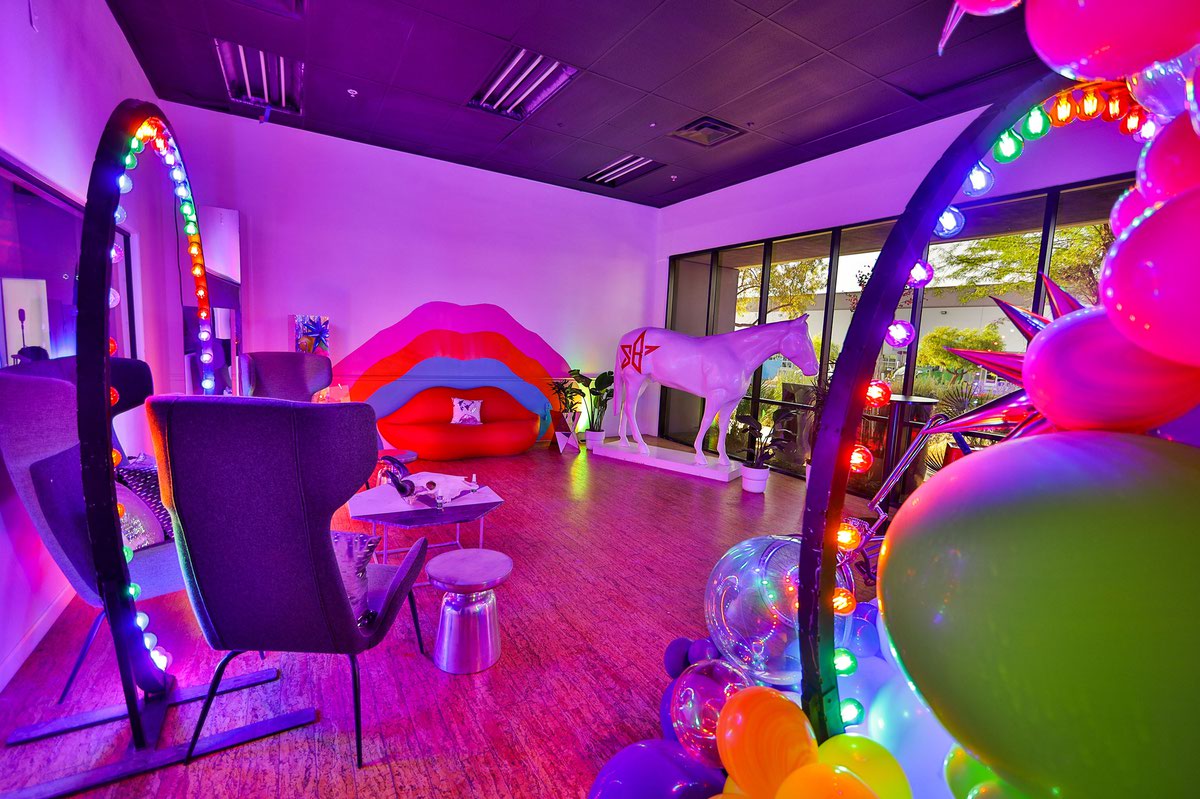 Few event spaces inspire a collective sense of awe like StarBase. Navigating the experiential venue, an expanse of 8,000 colorful square feet, feels like an event in and of itself. It’s a choose-your-own neon-lit adventure under one funky, immersive roof.

StarBase venue director Melissa Desrameaux says the building initially had other tenants, but as their leases ended, Fresh Wata Studios took over more of the space, and “we started connecting the suites,” she says, “building out our offices, turning the rooms into where you could see our creativity and capabilities.”

A life-size astronaut resides in the corner of the themed Neon Cloud room, illuminated by glowing cacti and a Vegas Vicki-emblazoned bar. Approach the back of StarBase and you’ll find an entire wall of neon speakers in the Green Room hallway, next to a featherless Big Bird-like statue that has dunked its head in a nearby sink.

A sense of playfulness pervades much of the space, and “each room has a little bit of a story,” Desrameaux says. Fresh Wata Studios became a showroom for private events in 2018. But during the past year, the venue launched its own programming and opened its event space up to public and outside promoters. The studio also rebranded as StarBase, a live and virtual entertainment event space.

“We really want this to be about the locals. We want it to be about building something that’s off-Strip and still has that laid back type feel,” Desrameaux says. “We want our space to be known for the quality of the people here, not just for the cocktails or the different talent coming in but who you connect with when you’re here.”

There’s plenty to connect over at StarBase. Plant-based foodies enjoy the venue’s Sunday brunches, and the venue’s Flight School—during which sommeliers “pilot” guests through tastings—should appeal to those learning about wine and cheese.

StarBase has played host to concerts by touring bands like Death Valley Girls and such local acts as Ami Divine and Yzzi. And the venue also runs the vivacious LGBTQ nightlife party Starfire every third Saturday.

“It’s really sad that some people don’t feel safe at different locations,” Desrameaux says. “They go to a party and they feel pigeon-holed. We want to create that experience, that pop-up, where it’s like a Studio 54 2.0 and it’s inclusive.”

Starfire, which features two stages, three outdoor event lots, five projectors and 17 TVs, is actually set to go dark in July before returning better than ever in August, Desrameaux says. “We’re amping up the entertainment, the fashion shows, the runway contests, the ballroom scene,” she explains, adding that Starfire will also return as an 18-and-over party. “Some of the people in that community between 18 and 20 don’t really have a place to go. So let’s push the envelope even more but still make it safe.”

With so much square footage to work with, StarBase has become a conductor of experiences. The venue’s One Helluva Friday, which takes place every second Friday, is one of StarBase’s largest events, making use of the entire 8,000-square-foot space.

The evening begins with What the Hell Happened, a TED Talk-style speaker series in which professional leaders discuss their failures and what they learned from them. Next comes Hella Expressions, an open mic for local musicians, poets and comedians led by Asia Jade, who has hosted everything from Corduroy’s boozy bingo Downtown to events at Gold Spike and the Usual Place. The evening then winds down with a Late Night, Early Morning session of jams from a select artist or more comedy.

Desrameaux says she sees entertainment going in the same direction as the multifaceted StarBase. “I think people don’t want to be limited. They want to keep exploring,” she says.

“When we saw that Area15 was being built out to be the entertainment, dining and retail ultimate experience, that kind of let us know … we’re not alone in this,” she continues. “[It’s about] creating those micro environments, where people can have a conversation or sit and enjoy a drink but then pop back into another experience. It’s almost mimicking our behavior online with social media. If you want to dive into this little micro or niche-type of interest-based conversation or experience, you can.”

And soon, you won’t even have to step foot inside StarBase to experience its events. “We have built out a digital twin of our space in the metaverse,” Desrameaux says, so revelers can soon hang out via VR or by creating an avatar and navigating through the space virtually on their laptop or phone.

Last year, StarBase experimented with an extended-reality Pride event, and Desrameaux says June’s NFT Triple Crown derby race with virtual horses was a huge success. “I want to hear, ‘I was in StarBase VR, I met someone that was in the building and we connected,” Desrameaux says. “I would love to … make distance or location not a factor in why someone didn’t participate in an experience.”

Click HERE to subscribe for free to the Weekly Fix, the digital edition of Las Vegas Weekly! Stay up to date with the latest on Las Vegas concerts, shows, restaurants, bars and more, sent directly to your inbox!