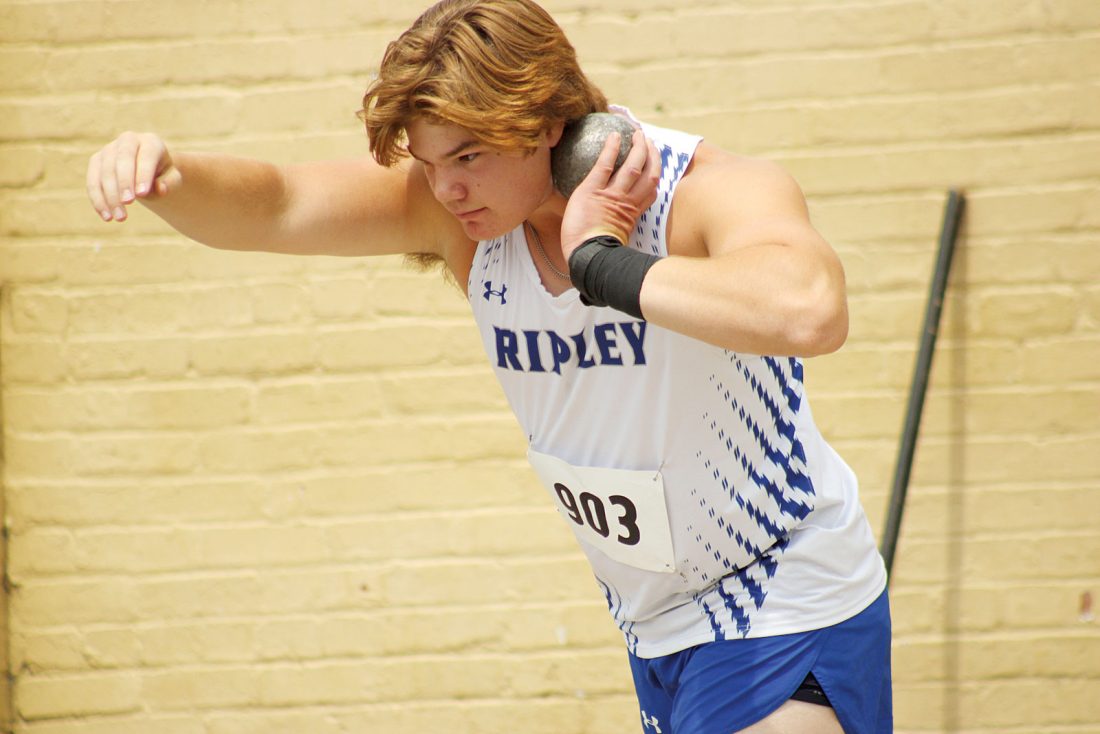 Friday afternoon at Laidley Field at the West Virginia High School State Track Meet, Winters placed runner-up in the shot put one day after finishing second in the discus.

His throw of 150 feet, 11 inches in the discus broke a school record which stood for nearly 50 years. His best shot put effort of 51-11.5 erased his previous career best by 8 inches and fell just shy by 2 inches in an attempt to break yet another school record which has stood for some 50 years as well. Cabell Midland’s Michael Lunsford won the event with a throw of 52-6.

The Ripley state qualifiers scored 24 points and finished tied for eighth in the team standings.

“Everybody wants to win a state championship,” said Winters, who plans to improve his craft and working out immediately. “I will take the PR. I am happy for (Lunsford). This year is a big improvement from last year . I didn’t even make it to state in the shot last year and barely made finals in the discus. I put in a lot of work in the offseason, improved a lot and plan to put even more work in this offseason.

An inauspicious start for Winters opened with a scratch on his first attempt in the prelims. He answered with a vengeance on his next throw of 51-11.5, which stood as a possible winner before Lunsford surpassed Winters on the field’s second-to-last throw in the finals.

“After that scratch, it amped me up for sure — I had to be a little bit safe in case it didn’t get me in position with my second one,” Winter said. “After (Lunsford) went 52-6, I thought I could go farther as long as I could get my technique right with some speed. Then hopefully hit one.”

Also scoring for the Vikings was Connor Casto, who won silver in the high jump with a leap of 6-2. Parkersburg South’s Nathan Plotner wasn’t too far behind after placing fourth with an identical height.

South’s total body of work resulted in 17 points, which left the Patriots in 11th place.

“Our team exceeded expectations as far as ranking and predictions go,” South coach Jason Jones said. “I thought we would place higher than people thought, especially in the 4×200 and shuttle relay.

One of several highlights featured the shuttle hurdle team of Jackson Dearth, Miciah Jones, Brayden Wise and Zach Parsons turning in a time of 58.23, which gave South second place overall behind state champion Musselman’s time of 56.70.

“Huntington nipped us last week at regional in the shuttle hurdles and we were able to get them this week,” Jones said. “We ran our best time of the year. This was the right time to do it.

“We did several things well, so I am happy with this meet.”

Dearth, who competed in four events in 90-plus degree weather (including three races in the hurdle events), contributed a fifth-place showing in the 110 high hurdles.

“I was definitely looking for much better in the 100 highs, but I will take that,” Dearth said. “After my hurdle events, I felt hot and tired. We are piling up a few points as a team — it’s been exciting and tiring. Definitely excited to get this last race — the 4×400 — out of the way.”

Teammate Zach Parsons raced in three events, including a fifth-place finish in the 100. The junior also joined Xander Quinn, Gunner Sands and Chase Anderson with a fifth-place effort in the 4×200, which won the slow heat and bumped up several positions from its original seed after the regional meet.

“At regionals, I ran the 100 finals before the 4×200, so I was dead,” said Parsons, who didn’t lose in the 100 this season until Thursday’s prelims. “At regionals, I paced myself just good enough where we would qualify in the 4×200.

“This week, we worked on our handoffs a lot. We had perfect handoffs today. Everybody ran hard. There is a lot of competition and kids we don’t normally see, so that is good for us. I love getting pushed and having people running beside me. I don’t get that until states.”

As for defending state champion Parkersburg, this year was a stark contrast in the number of state qualifiers. Distance runner Franklin Angelos and hurdler Jacob Moore represented the Big Reds in the individual events, while Jackson Wharton, Landon Edwards, Jacob Moore and Connor Petty competed in the 4×800.

Angelos was responsible for the sum total for PHS after placing fourth in 800 and sixth in the 1600. The senior also finished seventh in the 3200 on Thursday as the Big Reds scored five points and placed 19th in the team standings.

On Friday, Angelos played the rabbit in the 1600 and bolted out to an early lead. In the 800, he led a pack of multiple runners through the first lap.

“The 800 was my last high school race — honestly, strategy goes out the window once the race starts,” Angelos said. “The goal was to leave it all out there. I was projected not to place in the 800. I had the 11th best time coming in, so I just decided hang on for as long as I can.

“I tried to make a move on the backstretch on the last lap, but the other three runners are at a little different speed level than I am. I am happy with my performance. I am a little dead.”

The vibes running through the PHS boys camp did not have the same intensity as the one last year when the Big Reds were chasing down a state title. And that played a factor with Angelos, who will begin his collegiate career at Ohio University in the fall.

“It was a different feeling coming into this year — more solo,” said Angelos, who will give his legs a break when he leaves for Greece in the upcoming week. “Last year, we came in here with a team state championship in mind. I came here today to close it out right.

“For some, competing in high school may seem like the end. For me, it’s coming into the fall like another high school season. Nothing is really changing other than taking a much bigger step up — level-wise.”

Today’s breaking news and more in your inbox