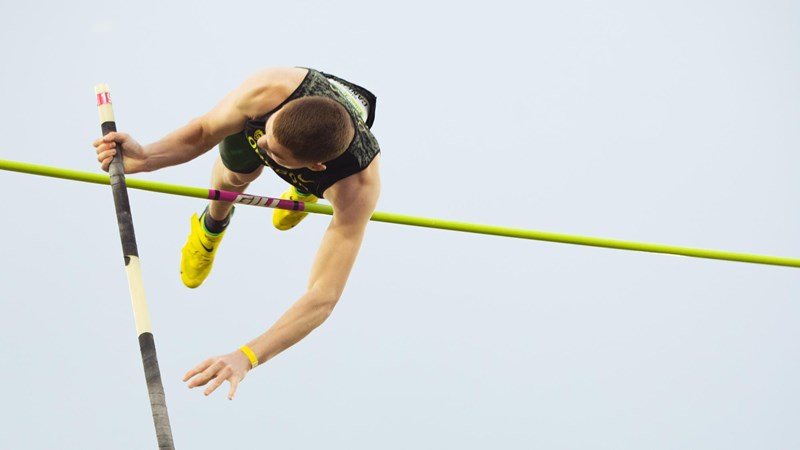 In a familiar ending to last weekend’s Hayward Premiere, Ross and teammate Mine De Klerk finished 1-2 in the discus, respectively. Continuing the similarity to the UO home opener, Ross posted her best mark of the day in the first round with a toss of 51.42m/168-8 to out-distance the field. The Ducks had three in the top four with De Klerk (48.62m) in second and Ellie Akough (40.59m) in fourth.

Brewster needed a legal effort in the third round to continue Saturday after fouls on his first two throws of the day. On his fourth attempt, he got the discus out to 47.04m/154-4 to strengthen his hold on first place. The result represents the first win of his Oregon career.

The Ducks posted another 1-2 finish in the pole vault with Canfield and J Kai Yamafuji in the pole vault. Canfield, a native of Lake Oswego, established a new lifetime best with a 4.95m/16-2.75 clearance. With the win in hand, he took three unsuccessful attempts at 5.05 meters. Yamafuji was second with a final clearance of 4.81m/15-9.25, a new season’s best.

Oregon rounded out its set of wins with Akough and Strunk in the hammer. Akough recorded a season-best measure of 51.39m/168-7 in the third round. The mark is just off her overall PR of 51.68 meters, a toss produced last season while competing unattached. For Strunk (60.18m/197-5), any one of his three legal marks were good enough for the win.

Up next, the Ducks will look to add to their season résumé at the Bryan Clay Invitational (multis) and Mt. SAC Relays in California. The team is back at Hayward Field on April 22-23 for the Oregon Relays.

Single-meet and season tickets for the Oregon home schedule, plus all-session and single-day tickets for the Pac-12 and NCAA Championships, are currently on sale; click HERE or call 800-WEBFOOT (932-3668) to purchase. 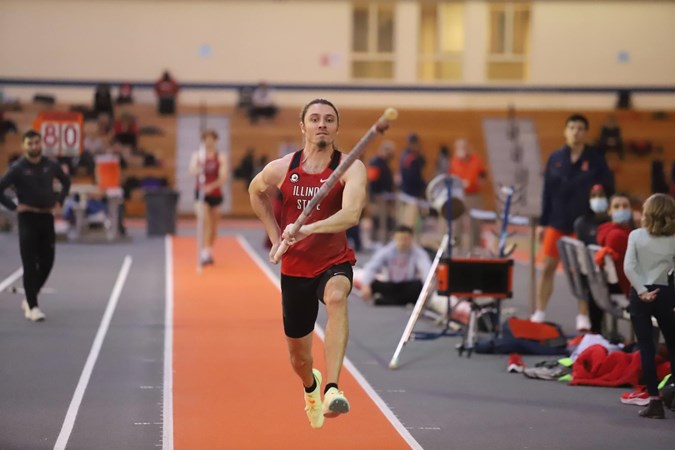 Sophomore Payton Taylor won two events on the day, placing first in both the men’s shot put and weight throw. In the shot put, Taylor tossed a throw of 15.71m (51-6.5 ft.), just shy of his season best. Taylor also set a big personal best in the weight throw with a mark of 16.35m (53-7.75 ft.), improving his previous best by over five feet.

Competing in the shot put for the second day in a row, sophomore Mye’Joi Williams claimed first for the women with a toss of 14.75m (48-4.75 ft.). With the win, Williams has now won the event three times on the season.

Fifth-year senior Sam Peschke set a season best with his win in the men’s pole vault, clearing 4.55m (14-11 ft.). The mark was Peshke’s highest indoor clearance since the 2021 MVC Championships.

Securing her first event win of the season, senior Ali Cranston placed first in the women’s pole vault, matching her season-best clearance of 3.50m (11-5.75 ft.), which she has achieved at two other meets.

The Redbirds will be back in action next weekend for its final regular season tune up at the Illini Classic in Champaign, Illinois on Friday, Feb. 18. A small group of Redbirds will also travel to South Bend, Indiana for the Alex Wilson Invite on Saturday, Feb. 19.