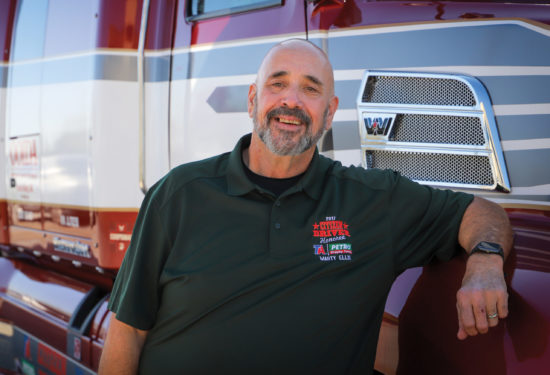 Ellis and the Spirit of the American Trucker trailer are scheduled March 18-20 to be at the Nashville TA Travel Center. That is at the junction of I-24 and James Robertson Parkway, Exit 48 from the interstate.

The Nashville TA is not far from the Cumberland River and Nissan Stadium, where the Tennessee Titans NFL team plays. There is a Charley’s Philly Steaks at the truck stop, but it is closed on Saturday and Sunday, according to the website. There is grab-an-go food available.

The Nashville TA has parking for 167 tractor-trailers.

The Nashville TA is dedicated to OOIDA life member Candy Bass, who was named a TA & Petro Citizen Driver in 2016. The Citizen Driver award recognizes professional commercial drivers who earn respect for the trucking industry through good citizenship, community involvement and leadership. TravelCenters of America dedicates a TA or Petro truck stop to each of the Citizen Driver honorees.

This is the stop between two events for Ellis and The Spirit. Last weekend was the Safety Drive for a Cure truck driving championship-style event the raised money to help children with brain tumors. Next weekend is the big blowout that is the Mid-America Trucking Show on March 24-26 in Louisville, Ky.

Ellis said he had a great time at the Safety Drive for a Cure event on March 12 at the Yellow/Holland-Atlanta Terminal in Ellenwood, Ga.

It was a full day, starting at 7 a.m. with breakfast and winding up around 5 p.m. Participants took a written test online before the event. The driving course and pre-trip inspection competition was done in person.

Unofficially, there were about 75 participants and something like 200 people total. About $38,000 was raised to help fight brain tumors in children. Over the 10 years that the annual Safety Driver for a Cure has been presented, more than $255,000 has been raised, Ellis reports.

Ellis pitched in to help judge on one course where the competitors maneuvered the rear-most drive axle over scoring pads.

Having competed himself before, Ellis said he felt the urge to do it again.

“If we come again, I am thinking I will compete just to have a little more fun,” he said.

About 75 drivers took part in the competition. In addition to truck-driving championship classes, there were some extracurricular ones, such as the Better Half Class, Manager Class, and the Retired Class. Photos by Marty Ellis

This is Problem No. 4 on the driving course. The driver must put his truck’s the front bumper within a box to qualify for a score. Then the judging team measures the distance on the side of the vehicle from the line that simulates a curb.

Marty Ellis, who drives the OOIDA tour truck, helped judge Problem No. 6 on the driving course where the competitors maneuvered the rear-most drive axle over scoring pads.

This is a display trailer that shows how a tanker is set up It is often brought to highway patrol events, firefighter events, hazmat response teams events so they can see how these tanks are constructed

This is a display trailer that shows how a tanker is set up It is often brought to highway patrol events, firefighter events, hazmat response teams events so they can see how these tanks are constructed.

These are the scoring pads on Problem No. 6. They can be set up to make it more challenging depending on where the points are placed.

There were some events that aren’t normally found in a state truck-driving championship event or a national championship.

One of those was the Better Half Class, where a spouse or other family member got to maneuver a vehicle through the course. There was a daycab with a tanker for them to drive and the real professional driver of the couple was in the jump seat guiding the better half through the course.

Another class outside the normal truck-driving championship regiment was the Management Class, where safety managers – the guys that are telling the drivers how to do their jobs – get to show their own skills behind the wheel.

There was Retired Class, too, for retired professional drivers itching to give it a try.

This year’s MATS is significant for at least a couple of reasons: because COVID-19 restrictions forced organizers to skip a year and because this is the show’s 50th anniversary celebration year. Land Line Staff Writer SJ Munoz wrote a feature on the history of MATS for the March-April 2022 Land Line Magazine.

This year, MATS will have expanded educational opportunities, including free Pro Talks Seminar Series, OOIDA’s Town Hall event, and OOIDA’s Truck to Success training class, an excerpt from the Association’s three-day course on preparing to be an owner-operator.

More information about OOIDA at MATS is available.

The PKY Truck Beauty Championship will return to Lot J behind the West Wing.

Look who stopped by

OOIDA life member Don Crouse stopped by the OOIDA tour trailer while Ellis had it parked in the Atlanta area.

Stop by when you see The Spirit

If you see OOIDA’s tour trailer, stop by and say hello. Ellis looks forward to visiting about the Association’s activities and current issues. There are copies of Land Line Magazine to pick up there. You can join or renew your membership for $10 off the regular price at The Spirit. Face masks are available at The Spirit for anyone with a commercial driver’s license.

After the Safety Drive for a Cure event in Atlanta, Ellis and the OOIDA tour trailer are scheduled to hit Nashville, Tenn.

Here is the schedule for The Spirit. LL