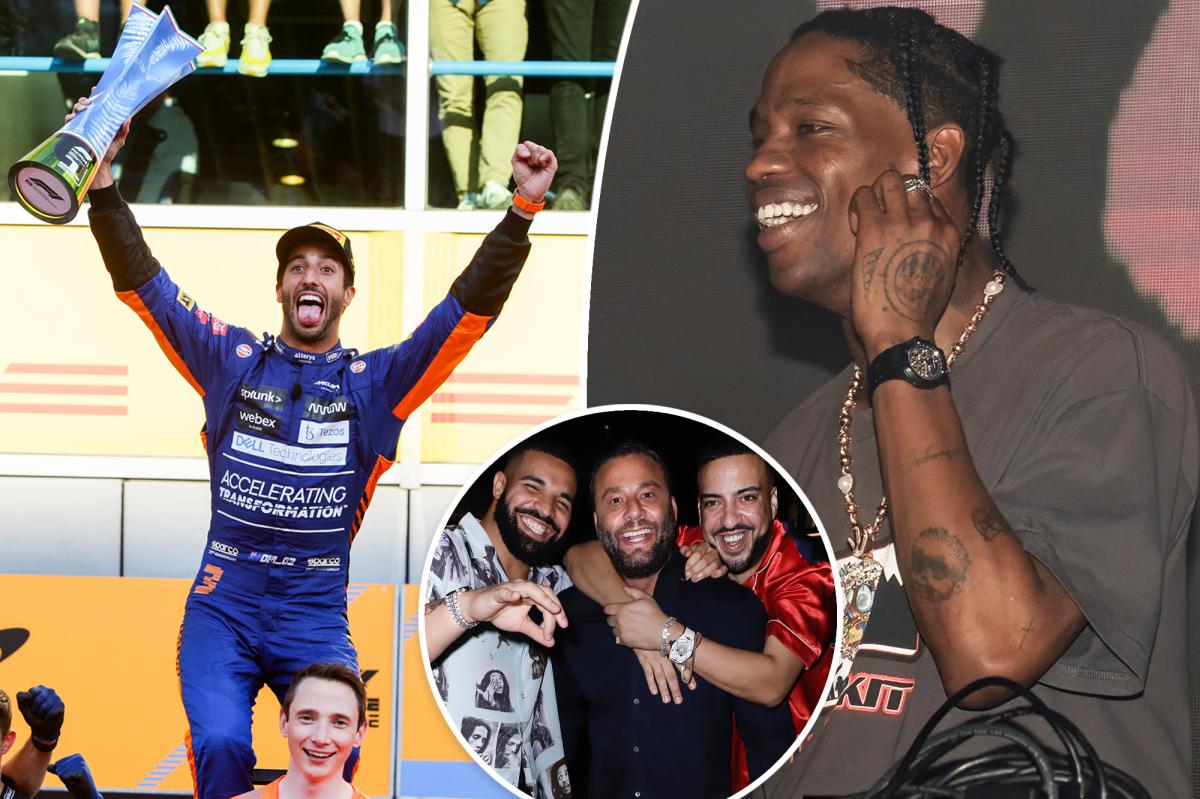 Miami’s biggest parties of the year will kick off next week as Formula 1 arrives in the beachfront South Florida city.

The historically Europe-centric sport will host its inaugural Miami Grand Prix at the Miami International Autodrome on Sunday, May 8, but there’s just as much action happening off-track as there will be during the Crypto.com-sponsored race.

While Charles Leclerc’s early title battle with reigning world champion Max Verstappen is the main event, the likes of Travis Scott, Martin Garrix, Snoop Dogg and Calvin Harris will descend upon the city for the star-studded fêtes.

Here’s everything you need to know about what’s happening across the Grand Prix weekend.

An opening night party will kick off at the track on Wednesday, May 4.

“It Ain’t Me” hitmaker Kygo will perform on the podium, while F1 drivers and team principals are expected to make an appearance on stage ahead of the bumper weekend.

Entertainment powerhouse Tao has partnered with STORY nightclub for a four-day event presented by Acura.

Red Bull Guest House is returning for the Miami GP, and will take over the five-star Faena Miami Beach hotel.

Guests will be treated to curated music experiences from artists like Arca, Channel Tres and Richie Hell, along with visits from top Red Bull athletes across all three days of the race weekend.

As F1’s global beer partner, Heineken will launch its “When You Drive Never Drink” campaign in style on Thursday, May 5.

We’re told drivers from McLaren, along with the all-women’s W Series, will be in attendance at the invite-only event.

Miami Race Nights at The Fontainebleau

The “Summer” chart-topper will play Saturday, May 7, while Guetta, who once tapped F1 driver Romain Grosjean for his “Dangerous” music video, will play Sunday, May 8.

It wouldn’t be a Miami event without the man who’s practically a South Florida institution himself: David Grutman. The nightlife kingpin — whose Groot Hospitality clientele includes the likes of Drake, David Beckham, Bella Hadid and the Kardashians — leads an impressive lineup of hospitality offerings at the track.

He will serve a selection of signature items from his restaurants Komodo, Swan, Papi Steak, SFC, Strawberry Moon and The Key Club at the exclusive 72 Club throughout the race weekend.

Miami hotspot E11EVEN will also host a star-studded lineup across the race weekend as follows:

Scott’s set will notably mark one of his first major performances since the Astroworld tragedy in November 2021. The “Sicko Mode” rapper previously headlined Sports Illustrated’s US Grand Prix After Party in October 2021.

Major Food Group will have a presence both on and off the track throughout the weekend. The hospitality group, known for attracting celebrity clientele including the Kardashians, Leonardo DiCaprio and Drake, will host a pop-up dinner party on Miami Beach.

“I think that it’s a natural fit for us to be doing something really special in honor of [Formula 1],” MFG co-founder Jeff Zalaznick told Page Six.

Carbone Beach, which is only available to American Express cardholders, will host 200 people per night for a lavish dinner prepared by chef Mario Carbone himself. The night will also include surprise performances by “big artists and musicians.”

Meanwhile, MFG’s private membership offering, ZZ’s Club, will partner with The Palm Club at Hard Rock Stadium to present a variety of Japanese dishes and cocktails. While dining in a luxe setting, guests can also watch the action on track.

Fans can catch “Sunflower” rapper Post Malone when he plays the Hard Rock Hotel & Casino in Hollywood, a 15 minute drive from the Miami Gardens circuit.

He will perform on Friday, May 6 to celebrate F1’s inaugural Miami race.

FTX Off The Grid

Mercedes-AMG Petronas’ cryptocurrency sponsor FTX, in partnership with IWC Schaffhausen and the City of Miami Beach, will host an all-immersive three-day event on the iconic South Florida shoreline.

FTX Off The Grid will feature performances from Disclosure, Kaytranada and Jamie XX, and offer guests the opportunity to get an up-close view of the Mercedes F1 car.

DJ Kaskade will perform on May 6, while Diplo will take the stage on May 8.

We’re told entrepreneur Hannah Bronfman will be in the DJ booth.

Richard Caring’s new hot spot Sexy Fish, which has hosted A-listers such as Drake and Mary J. Blige, will be hosting a party celebrating the Miami Grand Prix with a Thursday-night soirée.

The Martinez Brothers – an American duo of disc jockeys, music producers and remixers originally from the Bronx – are set to perform.

Nahmias x Patron Of The New

Clothing brand Nahmias and retail store Patron Of The New in the Miami Design District are linking up to throw a pop-up party for the Miami Grand Prix on May 7. There, Nahmias will display their exclusive capsule collection.

As previously reported, Formula 1 has experienced rapid growth in the US over the past few years: viewership was up 54 percent last year, and the 2022 season opener in Bahrain attracted more than one million viewers.

F1 owners Liberty Media have reacted to the sport’s surge in popularity — which could be attributed, in part, to the Netflix series “Drive to Survive” — by adding races to the North American slate.

F1 has been racing in Austin, Texas, since 2012. However, this is the first time fans will see the likes of Red Bull, Mercedes and Ferrari on the streets of Miami at speeds up to 200 miles per hour.

Travis Scott has announced a new organization to “make all events the safest spaces they can possibly be.”

In the aftermath of the Astroworld tragedy in 2021 which killed 10 people as a crowd crush occurred, the rapper reflected on taking “actionable change.”

“Over the past few months I’ve been taking the time and space to grieve, reflect and do my part to heal my community. Most importantly, I want to use my resources and platform moving forward towards actionable change. This will be a lifelong journey for me and my family,” Scott wrote on Instagram.

Scott said he wants to be a “leader in my community” as it is “easy for corporations and institutions to stay in the shadows.”

“My team and I created Project HEAL to take much needed action towards supporting real solutions that make all events the safest spaces they can possibly be. I will always honour the victims of the Astroworld tragedy who remain in my heart forever,” he wrote.

Scott added, “Giving back and creating opportunities for the youth is something I’ve always done and will continue to do as long as I have the chance. This program will be a catalyst to real change and I can’t wait to introduce the rest of the technology and ideas we’ve been working on.”


READ MORE:
Petition For Travis Scott To Headline Coachella 2023 Had Over 60,000 Fake Signatures

The official description of Project HEAL is a “multi-tier initiative dedicated to addressing challenges facing today’s youth, especially those from marginalized and at-risk communities.”

According to TMZ, Scott is donating $5 million to the causes.