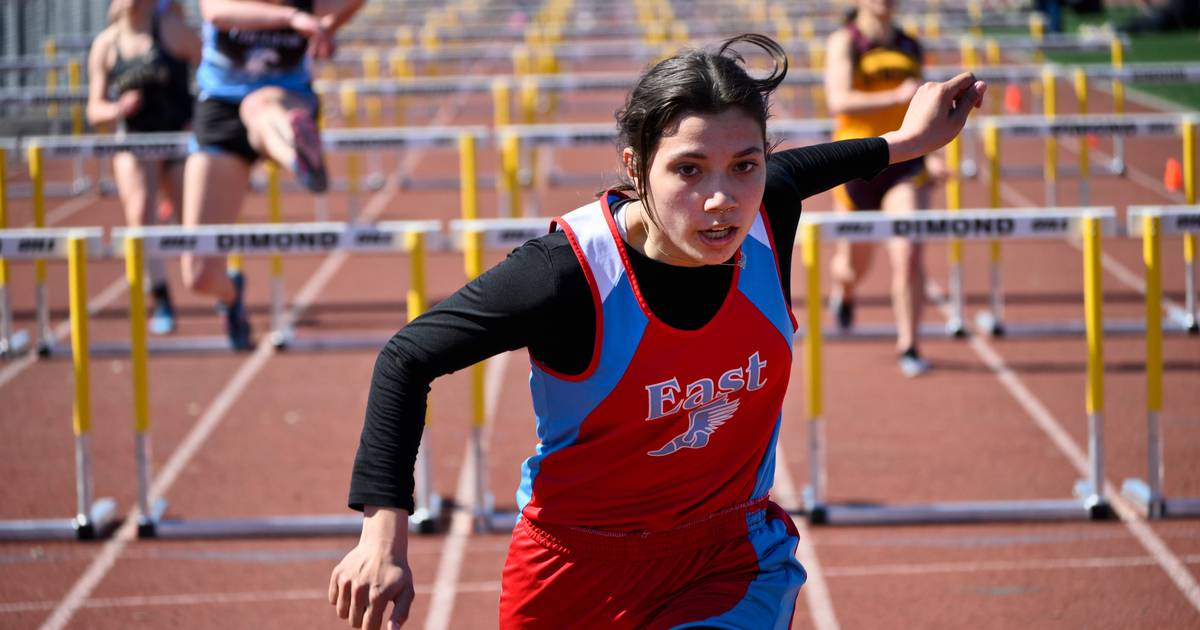 For Olyvia Mamae, the Anchorage Invitational track and field meet was an exercise in perseverance, a barometer for how much suffering she’ll be in store for later this month at the state meet.

On Friday, the junior from Bettye Davis East High ran the 100 meters, 200 and 100 hurdles. Saturday, it was those same three events plus her signature event, the 300 hurdles.

“This is nice because it’s the first time I’ve run all four events,” Mamae said. “Before this I’ve been running three or two to work on focus or some of the things I need to complete. But today is a big preview of how state is going to feel because I’m running all four events for state. Right now, I’m really just trying to get used to this kind of hurt.”

Mamae swept all four events Saturday, despite hitting a strong headwind along the final turn in her 300 hurdle race at Dimond High.

“I was just trying to maintain my speed and hit my hurdles in stride,” she said. “I’m not disappointed, but I can’t say I’m happy because it’s a whole second off my PR, but you get what you get. I’ve already done like five races leading up to this. I finished, that’s all that matters.”

“I ran a couple hundreds before this,” said Tirpack, a junior. “That definitely helped me in the end there.”

Tirpack, who ran a personal record, said he treated the meet as a bit of a dress rehearsal for state.

“The lanes are pretty narrow, but other than that, it’s not much different than other meets, at least running the 400,” he said.

Among the most-watched races of the day was the girls 1,600, where Chugiak junior Campbell Peterson and West senior Payton Smith continued their season-long tete-a-tete.

Smith, who is headed to Oregon State to compete as a runner next fall, took the season’s first matchup at the Big C Relays. But Saturday, it was Peterson who pulled away in the final 300 meters.

The 5:13.66 finish was a two-second PR for Peterson, who found herself in a new role in the race.

“I’m usually a frontrunner but I’ve really been working on my pacing and my kick on the end,” Peterson said. “I’ve been doing a lot of speed work. My goal was kind of just to stay with her, if she wants to take the lead, let her go. But then try and kick past her the last 250 meters. I think it worked out pretty well.”

Peterson was runner-up at the state cross-country meet in the fall and hopes to take the next step later this month when the state meet is at the Dimond track.

“I’m hoping for a state title,” she said. “I think it’s definitely within reach but I’m going to have to play it kind of smart.”

The West Valley track and field team was thrilled to be arriving in Anchorage for the meet. The Fairbanks school has struggled all season with the immense snowpack in the area and have had precious few competitions or even practices this spring.

West Valley coach Hannibal Grubis said he finally got the track plowed in mid-March over spring break, but even that has only provided some respite.

“We haven’t been throwing or anything (outside) because of the snow,” he said. “Almost nothing with hurdles, some of the jumping we haven’t been able to do. Some sprints and miles, that’s about it. It’s going to take a lot of patience and it’ll come. It’s going to be a steep curve.”

As if the season hadn’t already been a uphill climb, the team’s bus broke down in Healy on the trip to Anchorage on Thursday evening, leaving them with a five-hour delay.

“We were there until a little after 9 and didn’t get in until 2,” Grubis said. “It was just exhausting.”

Even the team’s likely top competitor was absent from this weekend’s Anchorage trip. Daniel Abramowicz, the 2021-22 Gatorade Alaska Boys Cross Country Player of the Year was back in Fairbanks taking Advanced Placement tests. The dedication to academics is not surprising for Abramowicz.

Abramowicz has maintained a 4.35 GPA according to information that accompanied his Gatorade honor.

That absence meant West Valley teammate Shane Fisher had to change his strategy a bit. Instead of tucking in behind Abramowicz, Fisher started out like a shot in the 1,600, but eventually fell to second with Dimond’s Jared Gardiner taking the race.

“I didn’t want to get stuck in, there were way too many guys,” he said. “It’s a good experience being in the lead. Usually I just sit behind Daniel back at home.”

Fisher had a knee injury during cross-country season and with the recovery plan, he hasn’t had quite as many issues with the weather as his teammates.

“It’s been so bad,” he said of the conditions. “I really don’t know how they’ve been doing it.”