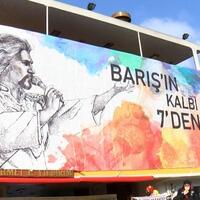 Barış Manço, a Turkish rock legend, singer, composer and a well-known television host, has been commemorated with a series of events held in Istanbul where he died 23 years ago.

An event was held by the Istanbul City Lines, but the commemoration took place on the Ahmet Hulusi Yıldırım ferry this year, as the ferry bearing the name of Manço was under maintenance at a shipyard.

The singer’s wife, Lale Manço Ahıskalı, and his younger son, Batıkan Manço, could not attend the ceremony held on the ferry, which sailed to the Bosphorus in the morning, because they were in isolation due to COVID-19.

The legend’s other son, Doğukan Manço, attended the ceremony with a limited number of students from the Science and Art Education Centers and dozens of fans who wanted to pay respects to the late artist.

While some people were dressed up as Manço, wearing the same make-up and costumes he once wore, the ceremony ended with prayers at his grave.

After having a successful career by reimagining traditional Turkish folk songs in rock and roll music, Manço died of a heart attack in 1999, just before the release of his album “Mançoloji,” celebrating his 40th year in the music industry.

Millions of people had gathered in Istanbul for his funeral.