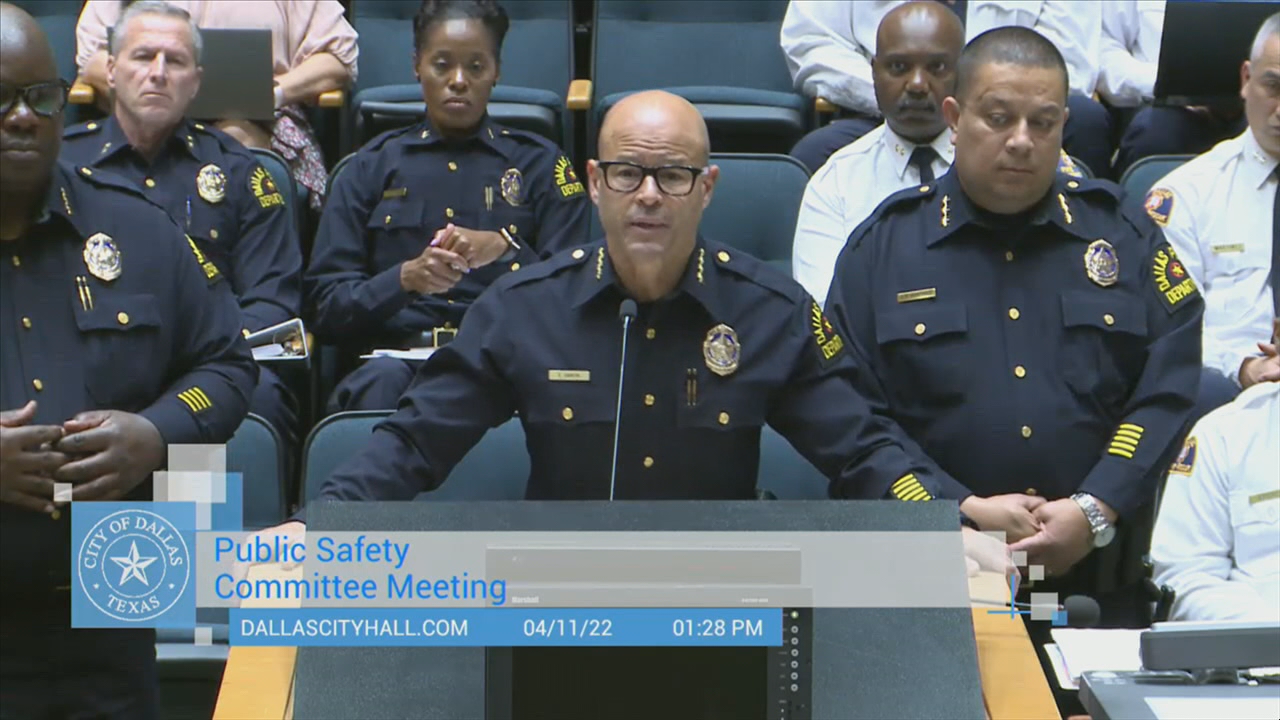 The police chief told council members that the city needs an ordinance to crack down on promoters and property owners who hold large events, like the one on April 2, without getting permits. Right now, the fine is between $500 and $2,000. For many, it’s a small cost of doing business.

DALLAS – After two mass shootings at non-permitted events, the Dallas City Council wants to consider tougher penalties for landowners and promoters who don’t follow the rules.

There have still been no arrests in either mass shooting that left two people dead and dozens injured.

The Dallas Police Department received seven calls for service before the deadly mass shooting at an unpermitted concert in Southern Dallas.

Dallas Police Chief Eddie Garcia said why the off-duty officers left the event without telling the supervisors about any issues brewing is still under investigation.

“The issue really comes from us not knowing there was an event on the day of the tragedy,” he said.

The police chief told council members that the city needs an ordinance to crack down on promoters and property owners who hold large events, like the one on April 2, without getting permits.

RELATED: No permit issued ahead of Dallas concert shooting that left 1 dead, 16 injured

It was an outdoor concert that became a mass shooting, leaving 16 people injured and one man dead.

“If I’m getting paid thousands and all I have to do is pay a $2,000 fine, irresponsible landowners will take that bet every day,” Garcia said. “We need to come up with something that has teeth.”

“You say teeth. I say fangs. I think it needs to hurt,” said Councilmember Gay Donnell Willis. “I would like to see us look at something stronger and more punitive on use that when it turns out to be an unauthorized concert with death. What about criminal?”

“It’s something we will look into,” said city attorney Chris Caso.

Councilman Tennel Atkins argued if DPD had more neighborhood police officers that they would hear about events like these in advance and put the city in a more proactive position.

“I think we have to build trust,” he said. “When we don’t have NPO officers, they don’t know what is going on. We are short NPO and patrol at South Central.”

Police say the victims of a mass shooting at a weekend party in South Dallas were not the intended targets. Ten people were shot. The youngest victim was as young as 15 years old.

“There is not a week that one of my three stars is not asking to fill a position. There is not a part of this police department that does not need more support,” he said. “We would love to do more. We would love to have more NPOs because they do a tremendous job. But we need more officers answering 911 calls. We need officers investigating crimes.”

But it can’t be ignored that even the city’s own off-duty police officers working the event left before the shooting without giving a heads-up to supervisors that trouble may have been brewing.

Monday, Chief Garcia said the issues surrounding that are still under investigation.

“We are looking at everything that happened that night. From criminal to administrative to see where we could have done better and where we failed,” he said.

Police said the motive in both recent mass shootings is still unknown. The youngest victim was 13 years old.  One victim from the shooting last week is still in the hospital.