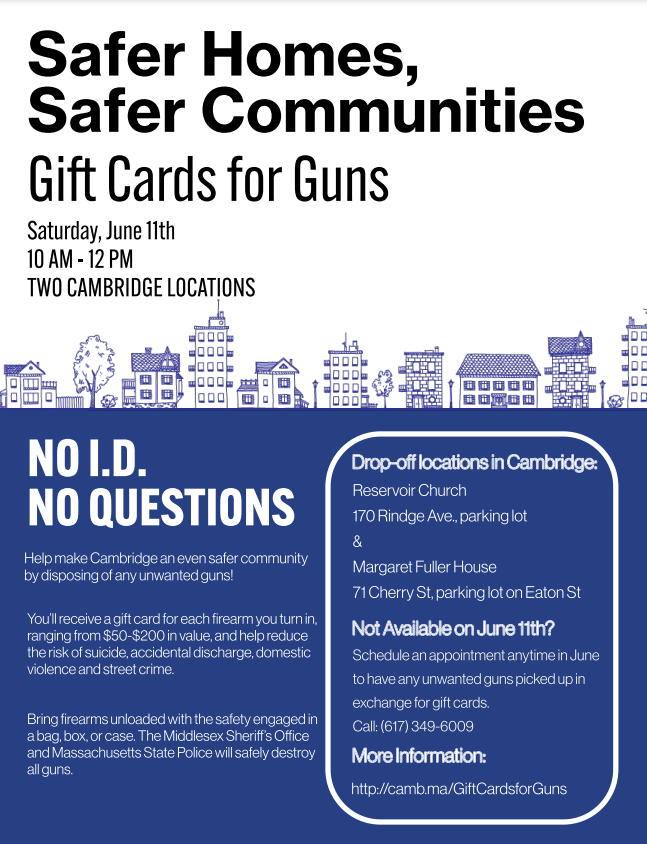 A record number of 245 unwanted guns were safely turned in at the seventh annual Cambridge “Safer Homes, Safer Community” Gift Cards for Guns event on Saturday, June 11 at Reservoir Church and Margaret Fuller House. The firearms that were turned in included pistols, revolvers, shotguns, rifles, BB guns that looked like 9mm pistols, and a toy gun. Residents from Cambridge and as far away as New Hampshire also dropped off ammunition and various gun parts. This year’s turnout surpassed last year’s previous record of more than 150 guns collected. Public safety officials and community volunteers have now collected more than 560 guns at Cambridge events, handed out firearm safety locks, and shared extensive information about suicide prevention and gun safety.

The Cambridge Gift Cards for Guns – part of the city’s initiative aimed at reducing accidental injuries in the home and reducing the risk of suicide, domestic violence, and street crime — is a collaboration of the City of Cambridge, the Middlesex Sheriff’s Office, and more than 60 faith and community-based organizations and businesses. Since 2013, the Middlesex Sheriff’s Office has assisted 15 cities and towns throughout the county, and more than 1,890 unwanted weapons have been turned in.

For those Cambridge residents who were not able to participate last weekend and would still like to dispose of any unwanted gun(s) in their homes, please contact 617-349-6009. Appointments scheduled by Thursday, June 30, 2022 will remain eligible for grocery gift cards ranging from $50-$200 in value.

Participants cited a wide range of reasons for participating in this year’s event. One father indicated that after seeing the recent shootings around the country, he wanted to make sure his son would not have any access to a firearm within his home. A widow indicated that she located a gun inside a bag while cleaning out her late husband’s belongings and wanted to have it removed from her home. An elderly male said he had possession of a pistol for decades, but never used it, and wanted to have it safely destroyed.

For more information on Cambridge’s “Safer Homes, Safer Community” initiative, please visit camb.ma/GiftCardsforGuns. If you or your organization is interested in becoming involved in a future event (e.g. donate gift cards, volunteer at the event, or help post flyers in advance of an event), or if you live in a community that may be interested in holding a similar event, please e-mail Many Helping Hands’ Lori Lander (lorilander@manyhelpinghands365.org), Cambridge Police Department’s Jeremy Warnick (jwarnick@cambridgepolice.org), or Middlesex Sheriff Office’s Kevin Maccioli (kmaccioli@sdm.state.ma.us).