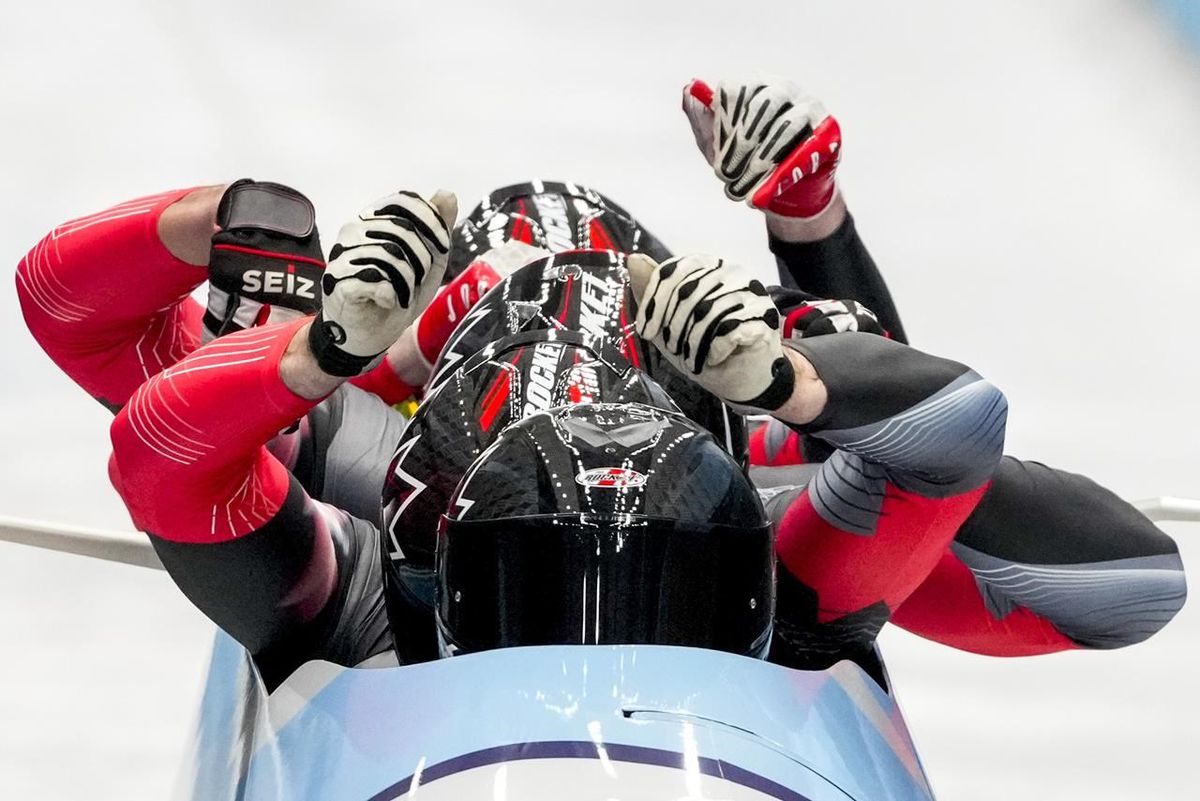 Canada’s Justin Kripps was in third place midway through the four-man bobsled competition at the Olympic Games.

Kripps, of Summerland, B.C., teamed with Ryan Sommer of White Rock, B.C., Cam Stones of Whitby Ont., and Benjamin Coakwell of Moose Jaw, Sask., to post a two-run time of one minute 57.38 seconds.

“It was pretty good execution. The boys pushed well, loaded clean and drove pretty well, so I was pretty happy,” Kripps said. “[We’re] going to look to come out and do the same thing tomorrow [Sunday].”

German sleds were in the top two positions, with Francesco Friedrich posting a time of 1:57.00 and Johannes Lochner coming in a mere 0.03 seconds behind.

No one else is within a half-second of the lead. The sled driven by Germany’s Christoph Hafer is fourth, 0.55 seconds behind Friedrich.

“It’s pretty tough. They have really good equipment, they’re pretty fast today,” Kripps said of the top-two German sleds. “Good starts from Francesco, we’re right there with Johannes, but he has really good speed down the track.”

Kripps and Friedrich shared the gold medal in the two-man event at the 2018 Pyeongchang Games, but Kripps struggled in that event this year and slid to a 10th-place finish on Tuesday at the Yanqing National Sliding Center.

“Pretty much got everything today,” he said when asked if he has ironed out his mistakes from the two-man event. “[We’ll] have to look at the video to see the little details but everything felt pretty straight, parallel, really clean, so I was happy with that.”

Christopher Spring of Priddis, Alta., piloted his sled to 11th, while Taylor Austin of Lethbridge, Alta., was 21st.

Friedrich is seeking his fourth Olympic gold medal and his second bobsled double-double.

There have been six instances of a bobsled driver winning gold in two-man and four-man at the same Olympics: Andreas Ostler in 1952, Eugenio Monti in 1968, Meinhard Nehmer in 1976, Wolfgang Hoppe in 1984, Andre Lange in 2006 and Friedrich in 2018.

Nobody has done it twice.

Friedrich gave himself that opportunity by winning the two-man gold earlier in the Olympics, and rallied in the second heat to give himself the halftime lead going into Sunday’s final two runs – the last chapter of the sliding competition in Beijing.

He trailed by 0.16 seconds after the first heat, then was 0.19 seconds faster than Lochner in the second heat.

Hunter Church, pushed by Josh Williamson, Kris Horn and Charlie Volker, is the top U.S. sled in the field, placing 13th so far in 1:58.61.

“We’ve got a big opportunity tomorrow to climb back and get into the top 10,” Church said.

Going into the final two competitive runs of the season on Sunday, Church said he’d be holding nothing back.

Frank DelDuca and his team of Carlo Valdes, Jimmy Reed and Hakeem Abdul-Saboor are tied for 14th, finishing their two runs Saturday in 1:58.82.

“These guys do a great job on and off the ice,” DelDuca said. “I have a ton of respect for them. I’ve been in many different races with them over the years as a push athlete and now as a driver. It’s pretty cool to come together on the biggest stage and just put together the best results we can. I know we’re digging deep to do the best we can, and it’s a great feeling to be with them.”

Of the eight bobsledders that the U.S. had on the ice for the four-man race, only two – Valdes, who is retiring, and Abdul-Saboor, who plans on sticking around for a run at the 2026 Milan-Cortina Games – had Olympic experience before the Beijing Games.

“Frank, for his first Olympics, he’s handled it great,” Valdes said. “He’s business as usual. He’s not overthinking anything.”