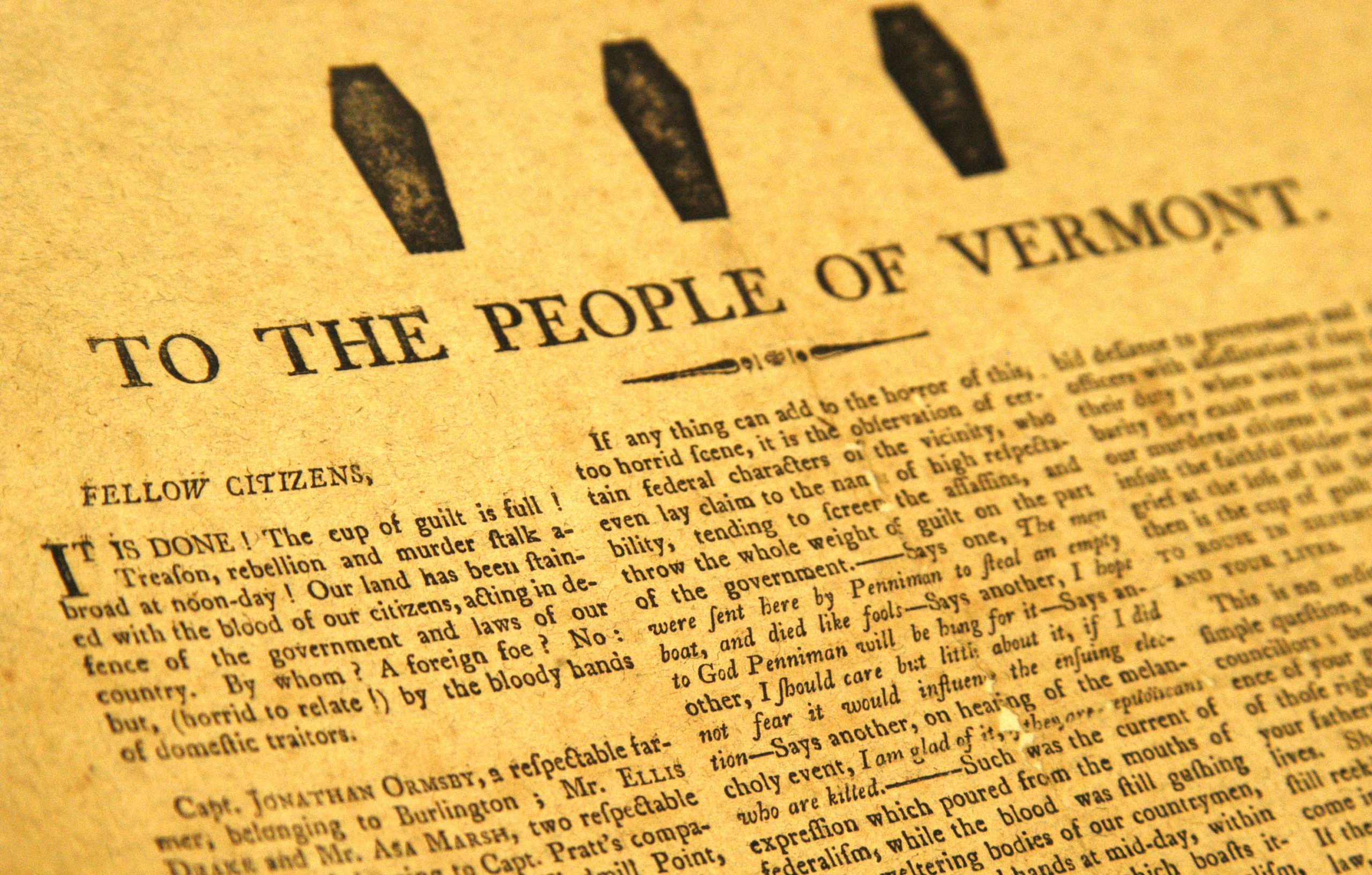 Though it occurred more than two centuries ago, the Black Snake Affair still ranks among the most shocking events to happen in Vermont. But the episode tends to get mentioned only in passing in most accounts of the state’s early years.

Readers usually get only the bare bones, which run something like this: In the run-up to the War of 1812, President Jefferson banned trade with Canada. Some Vermonters, who relied heavily on trade with Canada, turned to smuggling, or were at least sympathetic to smugglers. Federal Customs collectors and members of the state militia tried to stop the smuggling.

One day in 1808, they cornered the smugglers who used the infamous boat the Black Snake. Shots rang out and two soldiers and a local farmer were killed. The smugglers were arrested and one was hanged for the crime. End of story.

Well, actually, it’s more complicated, and interesting, than that. If you want to delve deeply into this incident, check out Gary Shattuck’s thoroughly researched book “Insurrection, Corruption & Murder in Early Vermont: Life on the Wild Northern Frontier,” which came out in 2014.

Shattuck, a former assistant U.S. attorney for Vermont, relied heavily on court documents to paint an intricate portrait of a turbulent and an often-overlooked period. The picture isn’t always the one we expect. This was a Vermont where criminality was common, community leaders were sometimes in cahoots with the criminals, and authorities tried, often in vain, to enforce the laws.

Smuggling on the lake

It turns out the Black Snake Affair wasn’t the only violent smuggling incident of 1808. Earlier in the summer, off the shore of Isle La Motte, the state militia seized a giant log raft. Covering 2 square acres and valued at a staggering $25,000, the raft was being piloted toward Canada. The smugglers responded by gathering a mob of roughly 60 local men, offering to divide $800 among them for their efforts, and returned a couple of nights later to retake the raft.

It was an easier task than you might think. The smugglers had persuaded, or bribed, one of the soldiers guarding the raft to steal lead shot from the militia unit’s stores and give it to the smugglers. Once the smugglers recaptured the raft and began to row away, soldiers opened fire on them. The smugglers shot back and, for about an hour and a half, the two sides traded shots.

Things turned deadly later that summer, however, when smugglers clashed again with militia members assigned to enforce the embargo.

In early August, the six-man smuggling crew of the Black Snake traveled south from Missisquoi Bay. The plan was to pick up a couple of more crewmembers before rowing up the mouth of the Winooski River in Burlington to gather a load of goods they would then smuggle north.

They stopped on Hog Island in West Swanton to pick up one man, who noticed that each crewmember carried a firearm. The crew added to its arsenal during a stop on South Hero, loading aboard a 9-foot “punt gun,” a weapon sometimes used to spray shot at flocks of waterfowl.

Jabez Penniman, the federal Customs collector for Vermont, learned of the Black Snake’s plan and ordered Lt. Daniel Farrington to gather 13 of his men and take the Fly, a revenue cutter, to capture it. The soldiers, drawn from a Vermont militia unit, were promised a $100 reward to split if they succeeded.

Penniman passed along a false rumor to Farrington that the Black Snake was only lightly armed. Farrington said he hoped to accomplish the mission without bloodshed.

Setting up an ambush

The smugglers’ sympathizers were more bloody-minded. While resting on North Hero, the Fly’s crew mentioned to local resident Peter Martin that they were pursuing the Black Snake. Martin replied that if they met the smugglers’ boat, some of them would be dead by sundown. And if they killed even one of the smugglers, Martin promised to rally 1,000 men to kill all the soldiers stationed on Windmill Point in Alburg.

After rowing up the Winooski, the smugglers commandeered the home of a tenant farmer, then ate and conducted target practice. Two local businessmen, who owned the cargo the Black Snake was to carry, warned the smugglers that the Fly was shadowing them. The businessmen didn’t want the cargo, which was sitting in a Burlington store, loaded onboard the Black Snake, for fear the Fly would seize it.

One of the businessmen offered the smugglers 10 gallons of rum to “destroy the Revenuers.” When the smugglers replied that they were short on ammunition, the man offered to provide some. Francis Ledgard, a young man who had rowed from South Hero, arrived later with the same news about the Fly’s presence, and the suggestion that they ambush the soldiers.

The next morning, the Fly’s crew paddled up the Winooski. Seeing the Fly approach, the smugglers’ leader, Truman Mudget (sometimes spelled Mudgett), warned Farrington that 30 armed men were waiting to defend the boat. The men aboard the Fly eventually spotted the Black Snake beached on the riverbank and Farrington gave the order to seize it.

“I swear by God, I will blow the first man’s brains out who lays hands on her,” Mudget declared. Ignoring the threat, Farrington sent six men with oars to row the Black Snake.

It was a fraught scene, this moment before violence erupted. As some of Farrington’s men rowed the Fly and Black Snake back down the Winooski toward the lake, four of the soldiers walked along the riverbank accompanied by four smugglers. As they walked, Mudget kept threatening the soldiers.

The incident might have ended bloodlessly if not for a neighborhood boy, 17-year-old David Sheffield, who had joined with the smugglers after they came up the Winooski. Sheffield was one of those who fired at the Fly and was later charged with shooting Private Ellis Drake in the head, killing him instantly.

Farrington ordered his men to row toward the riverbank, but not to return fire. The soldiers went ashore in search of the smugglers, who were hidden in the thicket. Farrington walked forward, accompanied by three soldiers and a local farmer, Capt. Jonathan Orsmby, a Revolutionary War veteran who had been urging the lieutenant to be more forceful with the smugglers.

They eventually encountered a pair of smugglers standing by the punt gun.  As the soldiers neared, one of the smugglers urged the other to fire the large gun. The shot killed Ormsby and the soldier beside him, Private Asa Marsh, and seriously wounded Farrington.

All the smugglers were eventually captured. However, two of them, William Noaks and Slocum Clark, escaped. What happened to them is unknown, but Shattuck found a tantalizing court document from the following winter regarding an inquisition on the bodies of a Noaks and a Clark. Had the Black Snake Affair turned people against the smugglers? Had Noaks and Clark become victims of vigilante justice?

Other Black Snake crewmembers, as well as Sheffield and Ledgard, were tried and sentenced to serve time in the new Windsor Prison, which was built after the local jail in Burlington proved too porous to hold anyone determined to escape.

Samuel Mott, who had fired the punt gun, was fortunate not to be executed for his crime. He was convicted of murder, but because of a procedural error, his conviction was vacated. He had to face a retrial.

In the meantime, Cyrus Dean, who had urged Mott to fire, came to trial. Shattuck believes the jury’s verdict matched the public’s vengeful mood. Dean was convicted of murder and publicly executed in Burlington.

Dean seemed to understand the injustice of his sentence. Standing on the scaffold, he kicked his hat into his grave, which was just below, and then spat onto his waiting coffin. He was hanged before a large crowd, but probably not the 10,000 later reported. That number was six times the entire population of Burlington at the time.

Dean’s hanging may have traumatized the community so much that, when Mott was retried, he was convicted only of manslaughter and imprisoned.

Despite his career in law enforcement, Shattuck has some sympathy for the smugglers. The smugglers were mostly desperate men trying to get by during a time of economic hardship made worse by the embargo. They were paid little for the risks they took, and nothing if the contraband didn’t reach its destination.

The ringleaders, however, could make a decent income, as could the Burlington businessmen who quietly profited from the smuggling. These men are the real villains in Shattuck’s telling of the incident.

Did you know VTDigger is a nonprofit?

Our journalism is made possible by member donations. If you value what we do, please contribute and help keep this vital resource accessible to all.