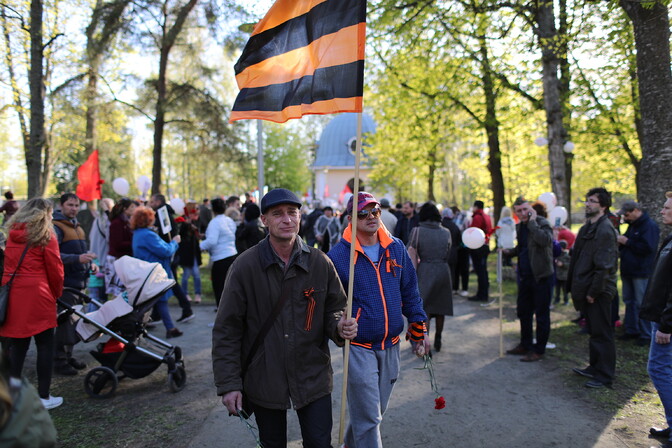 This year’s event, in addition to being the first in three years where strict Covid measures are not in place, must be seen in the light of Russia’s invasion of Ukraine, which started just over a month ago.

Those attending ceremonies marking May 9 could be seen to be supporting the current invasion as well, particularly if displaying symbols specific to that conflict.

At the same time, a wholesale ban at this stage seems unlikely, though some leaders have called for identifying provocateurs ahead of the event and ensuring they do not attend.

Interior minister Kristian Jaani (Center) told ETV news show “Aktuaalne kaamera” (AK) that: “So far as I know, in our neighboring countries, both in Latvia and in Lithuania, it has also been helpful that such symbols, which cause divisions and threats to public order within the so-called public space, have diminished over time. So I think this is very sensible.”

Discussions must be held on exactly how insignia should be barred and which legislation should be amended.

He said: “The Riigikogu has already started the process, but once again, I think it is reasonable.”

It is too early to talk about any sort of action plan for May 9 itself, Jaani said, adding that a full ban of gatherings such as that being imposed in Latvia, was unlikely.

Government ministers in Estonia do not sit at the Riigikogu.

Head of the Central Criminal Police Aivar Alaver concurred that it was too early at this stage.

“However, as today so too tomorrow, the police must ensure public order and prevent all kinds of threats on May 9. We will certainly work with very large forces, larger ones than usual,” Alaver told AK.

Adding that commemorating those who were killed during World War Two was understandable, but must be carried out in a way which minimizes tensions.

Lawyer Carri Ginter said there was no question of banning any particular symbol, adding that a legal amendment could be worded in such a way that the use of insignia in a way that specifically supports aggression against Ukraine would be penalized, through to the end of the current conflict and perhaps some years beyond and with police and the courts assessing the significance of any symbol displayed, on a case-by-case basis.

Estonian society should also protect Ukrainian women and children who have fled the war from possible offense, he added.

Ginter said: “I am a staunch defender of freedom of speech. But one principle of the law is simply that your right to wave your fists ends where my nose begins.”

Isamaa MP Mihhail Lotman said that the admonitions should begin and end with, for instance, the now-notorious “Z” symbol, adding that it is better to be able to see one’s enemies than not see them.

Those who had displayed the “Z” symbol or other symbols specifically supporting Russia’s current invasion of Ukraine should not be let off the hook subsequently and in the event of a defeat of Russian forces, Lotman added.

He said: “Soon those who are wearing these symbols will start claiming that they have never done anything of the kind. But they have done it and, and we might remember that.”

Opposition Social Democrats (SDE) chair Lauri Läänements told ERR that that actual provocateurs should be dealt with before May 9 to prevent them from getting to the event in the first place.

Laying wreaths at the Bronze Soldier statue, however – the focal point of May 9 processions in Tallinn – cannot be banned, Läänemets added.

“This probably would not make Estonia safer,” Läänemets said, adding the Police and Border Guard Board (PPA) can be relied upon to maintain order on the day.

Leader of the non-parliamentary Eesti 200 party told ERR that wreath-laying was acceptable on May 9, but large rallies were not.

She said: “Banning people from taking flowers somewhere to the monument may not be wise, but those kinds of major rallies, where speeches are given to celebrate the victory of the Red Army, are not appropriate at this moment.”

Kallas added that the wearing of the orange-black Ribbon of St. George, which evokes Russia’s Tsarist history in addition to the victory over Nazism at the end of World War Two, would be in the same category as wreath-laying.

Opposition Conservative People’s Party of Estonia (EKRE) Martin Helme said that pro-Russian demonstrations hould be barred, while those who publicly express support for Russia’s aggression in Ukraine, including those wearing the Ribbon of St. George, should be deported from the country

He said. “Estonia should surely ban demonstrations in support of Russia, both on May 9 and every other day of the year. Certainly, people should not be allowed to gather wearing St. George ribbons, as soldiers also decorated with these ribbons are currently killing women, children, pregnant women and the elderly, in Ukraine.”

“Anyone who expresses support for Russia’s aggression in Estonia, be it by marching with Russian flags and St. George ribbons on May 9, or by praising the “denazification” on Facebook, should be expelled [rom Estonia] immediately. They are a clear security threat,” Helme added.

This would mean not only the deprivation of an Estonian residency or work permit, but also the stripping of Estonian citizenship, if the individual was a naturalized citizen.

Center’s Riigikogu chief whip said any major demonstration should be forbidden, adding that the wreath-laying could go ahead.

The Russian-speaking population in Estonia has traditionally been a bedrock of electoral support for Center; the party is currently in office with Reform.

Isamaa leader Helir-Valdor Seeder called for a cross-party approval of his party’s legislative amendments, which would impose restrictions on residence permits, visas and weapons permits for those people inside Estonia who publicly justify the Putin regime’s crimes against the Ukrainian state and people.

Latvia has already ruled that any public gatherings marking May 9 would constitute an expression of Russian aggression and would be dealt with accordingly.

In 2020 and 2021 the Victory Day processions were necessarily scaled-down, due to Covid restrictions in place at the time.