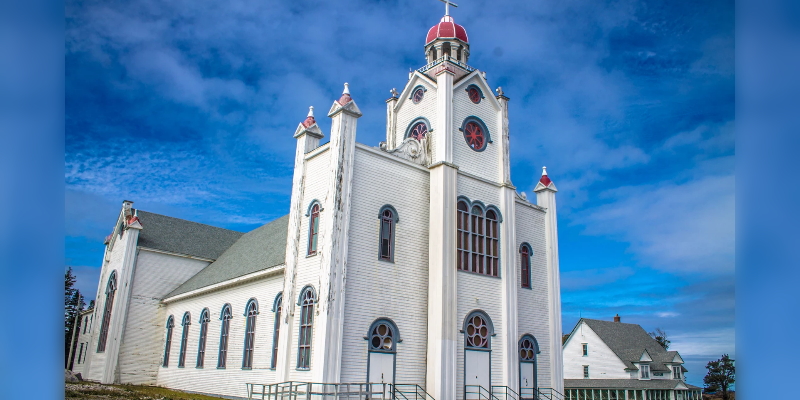 Some big plans are in the works now that a local committee has finally gained possession of a major landmark in the Port au Port region.

Our Lady of Mercy Roman Catholic Church in Port au Port West is one of the province’s largest wooden churches. It was designed by noted architect William F. Butler and built in 1914 to accommodate an anticipated population boom from the opening of a limestone quarry in Aguathuna.

The population boom never occurred and the quarry closed in the 1960s.

The church features a steeple that rises 115 feet and is big enough to accommodate 1000 parishioners. It was designated as a Registered Heritage Structure in 1997.

Our Lady of Mercy Complex Committee Chair Denise Goosney says although they have been running events in the church for some time, they finally purchased the building and outlying structures from the local Diocese, making them eligible for government funding.

Goosney says their first order of business is to conduct a structural assessment of the church and apply for the appropriate funding. She admits it’s a daunting task.

“It’s kind of scary… but something that needs to be done to preserve the culture and heritage of the area.”

A number of major events are planned this summer including the Port au Port Grand Ol’ Opry Show June 11. A full list of planned events can be found on the church’s website.

The International Ski Federation (FIS) has come under fire after a slew of disqualifications marred Monday’s first Olympic mixed team event, with one athlete saying the governing body had “destroyed” women’s ski jumping.

Germany, Austria, Norway and Japan all suffered disqualification for suit infringements, prompting anger and tears on what should have been a great night for the sport, but which ended up in fiasco.

Each team was made up of two women and two men, and all five of those disqualified were female.

“We were looking forward to the second competition at the Olympics. FIS destroyed that with this action — they destroyed women’s ski jumping,” Germany’s Katharina Althaus, who was one of those disqualified, told reporters.

“Our names are now [out] there and we just pulled the crap card. That is how you destroy nations, development and the entire sport.”

The Canadian team was able to take advantage, earning bronze amid the narrowed field.

“This is a parody, but I am not laughing … It is outrageous that this happens with the four biggest ski-jump nations,” he added.

Norwegian ski jumping chief of sports Clas Brede Braathen said the experience was “very painful” for the athletes and that the issue should have been ironed out before the Olympics.

“The sport of ski jumping has experienced one of its darker days …,” he told reporters.

“I’m lost for words, really. I’m in pain on behalf of our sport.”

With lightning-fast take-off runs and soaring leaps, wind resistance plays a huge part in ski jumping, and skis and suits are regularly checked by officials to ensure that competitors have not done anything to gain an unfair advantage.

Slovenia took the gold medal, with athletes representing the Russian Olympic Committee picking up the silver and Canada taking the shock bronze medal, but the focus quickly shifted from their achievement to how the rules were interpreted.

“I hope nobody ever experiences that again, it’s completely crazy,” Norwegian jumper Robert Johansson, who had been sitting on the bar preparing to jump when he found out about the disqualifications, told Reuters.

His teammates Silje Opseth and Anna Odine Stroem were both penalized, along with Germany’s Althaus, Japan’s Sara Takanashi and Daniela Iraschko-Stolz of Austria.

A distraught Takanashi quickly left the arena, and Opseth was also in tears as she told reporters how her suit was the same one that she had worn in Saturday’s competition without any problem from the judges.

“I think they checked it in a new way today compared to what they had done previously, I think it’s very strange that they would suddenly change how they do it in the middle of a tournament,” Opseth said before breaking down in tears again.

“I don’t know what to say. I’m really just shaken. I’m sorry that I was disqualified today,” she said.

The judges at the competition declined to comment when asked to do so by Norwegian journalists.